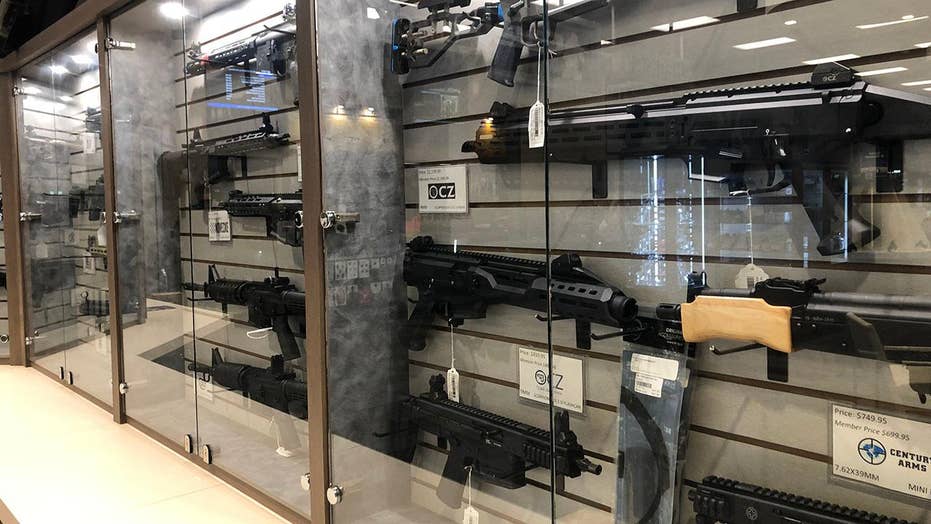 In the wake of two mass shootings in Texas and Ohio that killed at least 31 people, politicians, including President Donald Trump are pushing for new gun control measures in hopes of curbing future gun violence.

The push for so-called "red flag" laws and stronger background checks is gaining steam amid apparent support from President Trump and Democrats in Congress in the wake of the two mass shootings in El Paso and Dayton, though it presents a delicate challenge for the president as he works to assure his supporters that he will "always uphold the Second Amendment."

"I support strong, meaningful background checks where people who are insane, mentally ill — where people like that should not have guns," Trump said Thursday before a rally in New Hampshire. During the rally, Trump assured the crowd of supporters that he will protect their right to own a gun, saying, "It's not the gun that pulls the trigger. It's the person that pulls the trigger."

Red flag laws allow family members and law enforcement to intervene when they notice warning signs of an individual — they can petition a court order that would temporarily remove guns from dangerous situations. But opponents argue implementing red flag laws could lead to a slippery slope and infringe on Second Amendment rights.

“With red flag laws, that’s a gray area because I believe it could potentially be a very big misuse of power,” Stephen Powell, administrator and training director of C2 Tactical, told Fox News. “The problem is the people who are wishing to do evil on our citizens they will always find a way to commit that evil.”

Many Democrats on the 2020 campaign trail have called for going much farther than Trump, including proposing a federal gun buyback program to help reduce the estimated 400 million guns owned by civilians in America.

Handguns for sale in a display case at a licensed dealer in Arizona. (Ben Brown/Fox News)

According to the latest Fox News Poll, an overwhelming and bipartisan majority of voters favor background checks on gun buyers and taking guns from people who are a danger to themselves or others, with two-thirds also supporting a ban on “assault weapons” — although that majority is largely driven by Democrats.

The National Rifle Association has expressed concerns about red flag laws. Catherine Mortensen, an NRA spokeswoman, told Fox News in a statement that “to safeguard the rights of law-abiding gun owners, Extreme Risk Protection Orders at a minimum must include strong due process protections, require treatment, and include penalties against those who make frivolous claims."

One proponent, Meagan Cahill, a senior policy researcher at RAND Corp., says while “universal background checks and red flags definitely have the potential to help curb gun violence and even to reduce mass shootings,” there is a lack of data to show how effective these policies actually are.

“The problem of course is we don’t have a lot of evidence on exactly what the effects of many gun control policies that have been proposed are,” Cahill said, adding, however, that red flag laws and universal background checks are a good place to start.

While background checks have proven to be effective according to Cahill, "they are used in a limited fashion." For example, they are not required for private person-to-person gun sales, which could be seen as a potential loophole to avoid the screening process.

A licensed gun dealer in Arizona told Fox News of several instances in which, after denying someone for a gun purchase, they would say they’re going to go to a gun show instead.

“We said, ‘Hey man, let’s just wait an extra five days just to see if we get a response.’ And, the gentleman was like, 'you know what, F--k you guys, I’m not waiting I’m just going to buy one at the gun show,'" said the gun dealer, who requested to remain anonymous for fear of potential backlash to his business.

The gun dealer recalled another situation in which after, denying a person who had a medical marijuana card – because it is still considered illegal at the federal level – he was told, “You know what, there’s a gun show Saturday I’m just going to go buy one at the gun show.” He told Fox News “that’s happened several times.”

Alan Korwin, an expert on gun law and who has written 10 books on the subject, argues more legislation is not the answer.

“The presence of guns isn't why we're having murders,” he said. “The fabric of society is unraveling all over the place. And the idea that you can fix that with a statute is crazy.”

Korwin added, “We've always had lots of guns you used to buy guns mail order with no paperwork whatsoever. Why are people committing mass murder now? Nobody's asking that question … the answer is not paperwork. The answer is dealing with the psychosis in society that makes people want to go out and frenzied kill people they don't know.”

As the push for stricter gun control laws ramps up, the conversation also tends to argue the case from a mental health perspective– with the claim, these mass shooters often suffer from some type of mental illness, a notion Dr. Arthur Evans from the American Psychological Association says is inaccurate.

“Using a blanket statement like people have mental illness — we know from the research, the FBI has shown, that’s not the case. A study we’ve done at the APA … what we found is that there is no singular profile of a person who commits a mass shooting,” Evans said.

While Evans argues against canvassing all people who commit mass shootings as mentally ill, he advocated for a change in how the country approaches mental health policy that targets “people who are not quite at that point of being in crisis but clearly need some kind of intervention.”

“If you listen to the typical interview after one of these kinds of shootings, you often hear people say, ‘Well I knew the person had some problems, things seemed to be off with this person, but I wasn’t quite sure what was going on …,’” he said. “Those people don’t meet the criteria for mental health diagnosis, but they clearly need some type of intervention and most mental health systems aren’t set up to handle those type of individuals."

The Dickey Amendment, which according to the National Institutes of Health passed in the mid-90s in response to gun violence being treated as a public health issue, has hindered Congress from using federal funds for gun violence research.

That could be changing as an omnibus spending bill in 2018 clarified that the amendment doesn’t ban federally funded research on gun violence.

“People that own firearms people who are in the firearm industry are all for the rule of law … but we also want to make sure we don’t have our rights infringed as well, so there is a balance of power there and it’s a tricky situation,” he said.