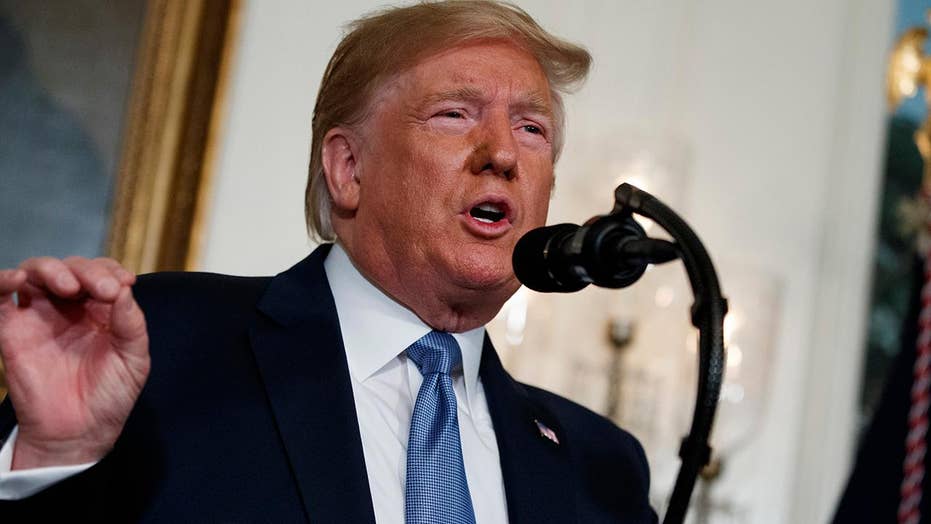 As Americans reel from a weekend punctured by two mass shootings and at least 33 lives lost, the issue of whether the tragedies were a product of access to firearms, unchecked mental illness, or myriad other factors has again caused schisms among lawmakers, medical professionals and political pundits.

President Trump was quick to call mass shooters “mentally ill monsters” on Monday, underscoring that it is “mental illness and hatred that pulls the trigger,” and subsequently prompting immediate pushback.

“Blaming mental illness for the gun violence in our country is simplistic and inaccurate and goes against the scientific evidence currently available,” Arthur C. Evans, CEO of the American Psychological Association, said in a statement. “Americans own nearly half of the estimated 650 million civilian-owned guns in the world. Access to this final, fatal tool means more deaths that occur more quickly whether in a mass shooting or in someone’s own home.”

“Blaming mental illness for the gun violence in our country is simplistic and inaccurate and goes against the scientific evidence currently available."

Much of the narrative that has stemmed amid the aftermath has rejected the notion that mental illness is the cause – and pegged easy access to guns instead.

Researchers in behavioral health at the University of Texas Medical Branch published a study earlier this year concluding that “counter to public beliefs, the majority of mental health symptoms examined were not related to gun violence. Instead, access to firearms was the primary culprit.” The researchers said there is “minimal evidence” to establish a firm link between a mass shooter and mental illness.

An FBI study of 63 active-shooter incidents from 2000 to 2013 could only verify that 25 percent of the active shooters were known to have been diagnosed with a mental illness of any kind and surmised that “formally diagnosed mental illness is not a very specific predictor of violence of any type, let alone targeted violence.”

Moreover, many also argue that those suffering from mental illness are far more likely to be victims of violence than the perpetrators of it.

“The most obvious solution to stopping mass shootings is to prevent access to assault weapons. Full stop,” noted Florida-based medical doctor and biotechnology consultant, Dr. Dena Grayson. “There is simply no reason that ordinary citizens need to own weapons of war.”

However, other industry professionals argue that to dismiss mental illness as the culprit is not accurate, and say pouring resources into its treatment is paramount.

“Anyone that is willing to get a gun and plan to go kill another person is obviously mentally ill. It could be due to drug use and addiction or many other mental illnesses like depression and anti-social personality disorder,” said Kati Morton, a California-based is a licensed marriage and family therapist. “Mental illness does play a role, and that’s why improving our mental care system could help us spot warning signs much earlier.”

Charles Figley, the director of the Tulane University Traumatology Institute in Louisiana, noted that the link between mass shootings and mental illness centers on the shooter’s “diminished capacity due to the inability to discern right from wrong,” but what is most important now is to “determine if it's mental illness or behaving in a selfish and inhumane way that harms others.”

A slew of polls in recent years – from Gallup to the Washington Post – have also found that around half of the American population attributes gun violence to mental illness and a “failure of the mental health system to identify individuals who are a danger to others,” seconded by “easy access to guns.”

“In some cases, untreated mental illness can exacerbate antisocial personality traits, contribute to delusional thinking and fuel illogical decision-making, all of which play a role in the means by which dangerous people choose to harm others,” Wendy Patrick, a prosecutor, behavioral expert and author of “Red Flags” noted. “On the other hand, there are scores of mentally ill people who would never harm a fly.”

Thus, trying to prevent those with mental illness from accessing a gun is fraught with complexities.

The National Alliance on Mental Illness (NAMI) also argues that creating new federal or state gun laws based on mental illness “could have the effect of creating more barriers to people being willing to seek treatment and help when they need it most.”

A man lays on top of a woman as others flee the Route 91 Harvest country music festival grounds in October 2017. (David Becker/Getty Images)

As it stands, federal laws deem it unlawful “for any person to sell or otherwise dispose of any firearm or ammunition to any person knowing or having reasonable cause to believe that such person has been adjudicated as a mental defective or has been committed to any mental institution.”

Seventeen states, including New York, Florida, California and Illinois, have in place some rendition of “red flag laws” -- also known as extreme protection laws -- that allow law enforcement or relatives to petition a court to at least briefly remove firearms from the possession of people deemed to pose a threat to themselves or others, which includes those who have been involuntarily committed to a psychiatric institution. However, critics bemoan that the federal system is reliant on states to report such cases so it can be added to the background check system, and the reliability of states adhering to the guidelines is largely mixed.

“Solutions to gun violence associated with mental illness lie in improving access to treatment, not in preventing people from seeking treatment in the first place. NAMI advocates for the federal government and states [to] fund programs focused on early identification, early intervention, and evidence-based health treatments,” the organization stated. “Investment in research to better identify traits that predict gun violence is also necessary.”

“In some cases, untreated mental illness can exacerbate antisocial personality traits, contribute to delusional thinking and fuel illogical decision-making, all of which play a role in the means by which dangerous people choose to harm others. On the other hand, there are scores of mentally ill people who would never harm a fly.”

Furthermore, clinical psychologist, attorney, and FBI scholar Dr. Lisa Strohman asserted that solutions to stop the next tragedy lie not in gun control, but flagging and getting the necessary help for potential aggressors.

“Most often these mass shooters are white males that are isolated and have found a sense of belonging in online forums that often radicalize or endorse these ideologies of violence and contempt,” Strohman, who is also founder of the Founder of Digital Citizen Academy, added. “This isn’t an access-to-guns issue, it is a mental health issue and lack of responsibility on the part of our government to acknowledge there are ways to track these radical groups. We cannot sit back and allow ourselves to have targeted ads sent to us knowing the industry can track everything and not hold them responsible for being able to track these radicalized searches.”

Yet experts also caution that simply taking guns away from questionable persons with no record, or mandating treatment for those exhibiting radical signs, is a slippery slope that could ultimately lead to massive privacy and constitutional violations for U.S. citizens.

But between the cracks of the argument of gun access versus mental illness, are those who point to other factors being behind the rash of massacres that routinely devastate American communities.

“Most mentally ill people are not capable of assembling the motive, method and opportunity to commit mass murder. What I do see is people who are lucid, frustrated, depressed and isolated by society,” explained Dennis Santiago, a firearms instructor and global risk analyst. “In the long run, changing social attitudes to get beyond selfish entitlement is the only way to remove the root cause of mass murders.”

Other factors that experts point to vary from video games and violent movies to twisted domestic terrorism ideologies and anger, or other issues that don’t fall under the clinical diagnosis of mental illness.

But given the potent divisions on the debate, many don’t foresee much change – at least in the short term.

“It is too polarized an issue to get any real solutions,” added Tim Larkin, a former U.S. military Special Operations officer. “Best we can do is get educated in active shooter training.”