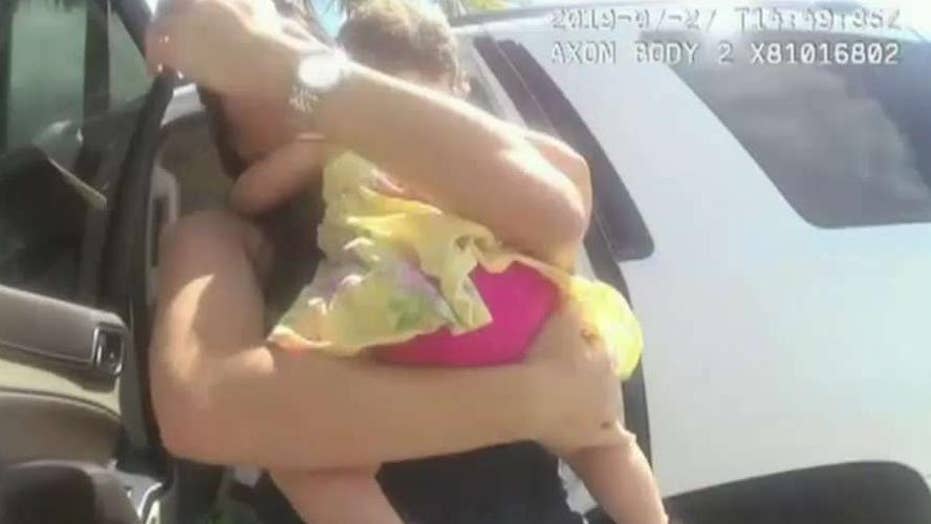 Body camera footage shows a Florida police officer breaking a glass window and pulling a 10-month-old girl to safety. The baby's mother says she accidentally locked the car with her daughter and keys inside.

Newly released body camera video shows the moment earlier this month when a police officer in Florida smashed a car window to save a baby trapped inside a hot car.

Christina Tufford told FOX29 the incident occurred after she took her 10-month-old daughter to a Lowe's in Stuart, Fla. so they could shop for flowers. But as Tufford made sure her child was secure in the car seat and used a remote starter to get the engine going -- and give the air conditioner a chance to cool the internal temperature -- she accidentally placed her car keys on a seat inside the vehicle.

Tufford said she'd shut the last door to the vehicle and walked over to the driver's side to get in when she noticed her door wouldn't budge. Suddenly, a wave of awful realization washed over the mom -- now separated from her baby by just a few inches of metal and glass.

“All the doors locked and she was inside with the keys,” Tufford told FOX29.

After attempts to reactivate her OnStar account proved unsuccessful, Tufford called police -- but then she was dealt another blow when the car shut off automatically before Officer Kyle Osinga arrived, and temperatures started to rise inside.

Osinga tried working with a tow truck driver to get the doors open but the efforts proved fruitless.

“I check on the kid a little bit later and the kid is not O.K. anymore. The head’s down, the eyes are closed," he told FOX29. "That’s when the adrenaline, that’s when I start to freak out.”

INFANT TWINS FOUND DEAD, 'FOAMING AT THE MOUTH,’ IN BACK OF CAR: POLICE

The officer could be seen beating the vehicle's window with his baton until he was able to break it with a punch, unlocking the vehicle and allowing Tufford to get to her daughter.

“Very lethargic," she said. "Wasn’t breathing good, I happened to have a whole thing of water bottles, poured water on her.”

Tufford told FOX29 she hopes others can learn from her experience, and she now carries a window punch in her purse in case she's ever in a similar situation.

So far in 2019, there have been 32 children who have died in hot cars, according to KidsandCars.org.

In a series of posts on Twitter, OnStar said its number one priority is "the safety of our customers, and we take these situations very seriously. We are in the process of investigating the details of this incident."

OnStar said once a plan expires or is canceled, the system is deactivated and the connection to the vehicle is removed.