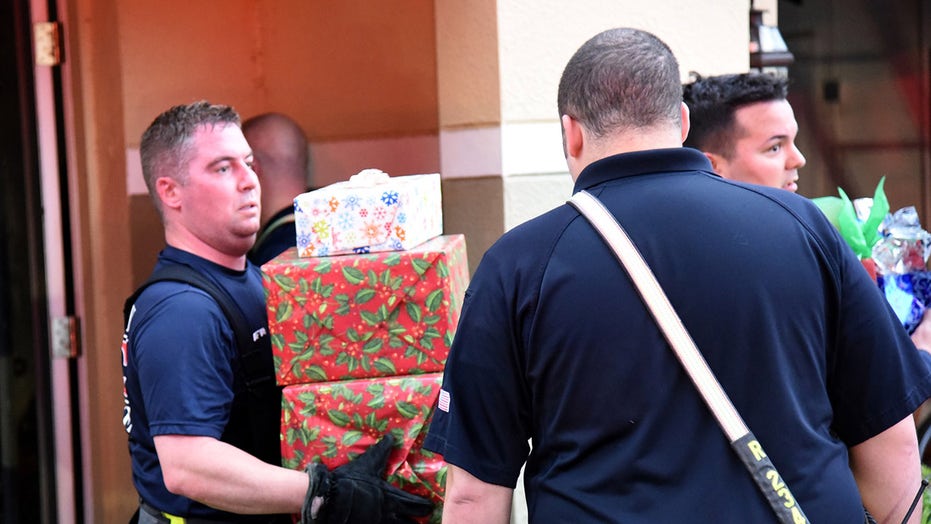 A group of firefighters turned into Santa's Little Helpers when they rescued a family's Christmas presents, complete with wrapping paper, and their tree after a fire broke out at their Florida home on Saturday.

Several first responders with the Polk County Fire Rescue responded to a two-story house fire in Mulberry, a city just 40 miles east of Tampa, around 4 p.m.

Firefights in Polk County, Florida, came to the rescue after a house in Mulberry caught fire on Saturday. (Polk County Fire Rescue)

As they responded to the scene, they were told a 13-year-old was able to safely escape the residence, and no other humans or animals were left inside," the fire rescue wrote in a Facebook post.

NEW JERSEY GIRL, 4, SAVES MOM BY CALLING 911 DURING MEDICAL EMERGENCY: 'SHE IS A SUPERHERO!'

Firefighters quickly worked to put the fire out, and once it was under control, the crew of Engine 2 came up with a heartwarming idea: to save the family's Christmas presents, because "they stood the chance of being damaged."

After the blaze was put out, the crew of Polk County Fire's Engine 2 thought they should save the family's Christmas presents. (Polk County Fire Rescue)

"All of the family's gifts and tree were able to be retrieved undamaged," the fire department wrote online. (Polk County Fire Rescue)

It's not yet known how the fire started, and although it's believed "nothing suspicious" sparked the flames on the home's second floor, one thing is clear: these firefighters helped save this family's lives — and their Christmas.