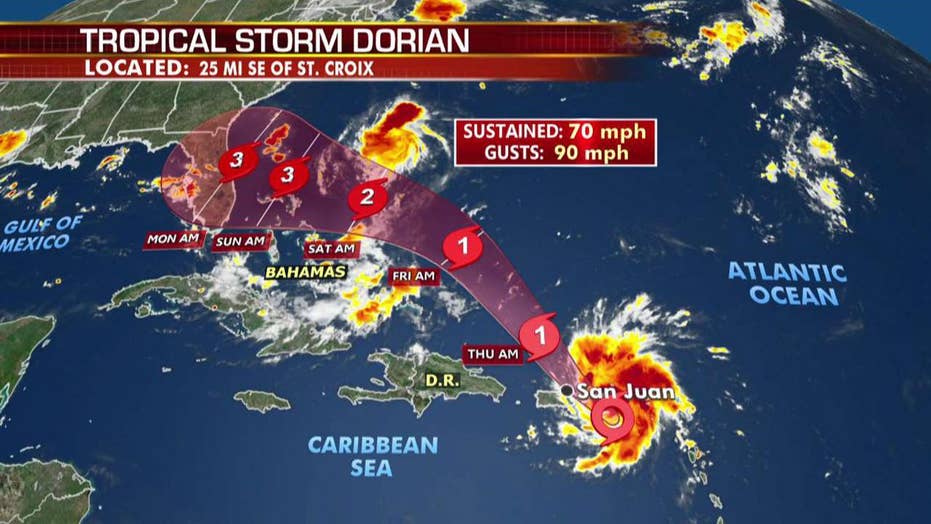 Rick Reichmuth reports from the Fox Extreme Weather Center with the latest update on the storm.

Puerto Rico and the U.S. Virgin Islands were breathing a huge sigh of relief Wednesday night as Hurricane Dorian swung away from them, resulting in far less damage than had been feared.

But whether Florida will have similar luck remained doubtful, according to forecasters, who predict Dorian could hit the state hard — possibly at Category 3 strength.

If the storm's current track holds, Dorian could be "the strongest hurricane to hit Central Florida in over 30 years," said Glenn Richards, meteorologist for FOX 35 in Orlando.

"Hurricane-force sustained winds would be carried across the entire width of the state if the current forecast holds,” he warned.

As the storm barreled across the Caribbean, people in Florida were starting to get ready. Local and county governments were distributing sandbags and many residents were rushing to stores for water, canned foods and emergency supplies.

At a Publix supermarket in Fort Lauderdale, shopper Jerry Pollack told Miami FOX affiliate WSVN-TV he was there to buy several gallons of bottled water.

“Just to be prepared,” Pollack told the station.

“It’s supposed to go further north,” he said of the hurricane, “but we’ll save these [water bottles] till November.”

“At this point it’s all about preparation,” Tracy Jackson, Broward County’s director of emergency management, told the station.  “Everybody should already have an idea about what they’re going to do when the storm’s threatening. This is a great time to verify those things.”

“At this point it’s all about preparation. Everybody should already have an idea about what they’re going to do when the storm’s threatening. This is a great time to verify those things.”

In Brevard County, James Falvey, owner of Tree Tech Pros, said his business has been booming in recent days as homeowners seek to have tree branches cleared away from power lines in anticipation of the hurricane.

“The phone calls are coming in like crazy,” Falvey told Orlando’s FOX 35.

“All Floridians on the East Coast should have 7 days of supplies, prepare their homes & follow the track closely," Gov. Ron DeSantis wrote in a tweet Wednesday before declaring a state of emergency for the counties expected to be most affected.

“We're happy because there are no damages to report," Mayor William Solís of the small Puerto Rican island of Culebra told the Associated Press. He said only one community lost power.

Resulting damage seemed to be limited to toppled trees and at least one downed utility pole in St. Thomas, he said, adding that there were no reports of major flooding.

"We are grateful that it wasn't a stronger storm," he told the Associated Press.

But forecasters warned the hurricane was gaining strength and probably would grow into a dangerous storm while heading toward the northern Bahamas and Florida's east coast.

The U.S. National Hurricane Center said Dorian was expected to strengthen into a dangerous Category 3 hurricane as it stayed well to the east of the southeastern and central Bahamas over the next two days. The forecast called for the storm to pass near or over the northern Bahamas on Saturday and close in on Florida by Sunday afternoon.

The storm was a Category 1 hurricane Wednesday when it swirled through the islands of the northeastern Caribbean, causing power outages and flooding in places but doing no major damage.

Puerto Rico seemed to be spared any heavy wind and rain, a huge relief to many on an island where blue tarps still cover some 30,000 homes nearly two years after Hurricane Maria. The island's 3.2 million inhabitants also depend on an unstable power grid that remains prone to outages since it was destroyed by Maria, a Category 4 storm.

Before the storm, President Donald Trump sent a tweet assuring islanders that "FEMA and all others are ready, and will do a great job."