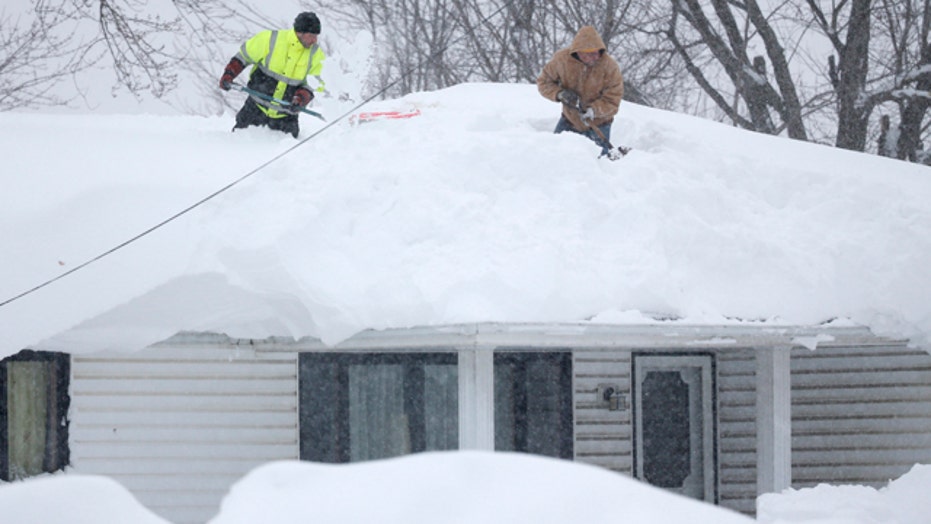 An epic three-day storm that dumped 7 feet of snow or more in the Buffalo area finally ended early Friday, but now residents in western New York face another set of threats: rain, higher temperatures and the possibility of severe flooding.

With driving bans in effect and many roads impassable, the NFL moved the Buffalo Bills' Sunday home game against the New York Jets to Monday night in Detroit. More than 30 roof collapses, most involving farm and flat-roof buildings, were reported overnight, officials said Friday. Little or no snow was expected on Friday and forecasters are predicting a chance of rain on Saturday and more on Monday, along with temperatures approaching 60 degrees. Homeowners and store employees in the region climbed onto roofs Thursday to shovel off the snow and reduce the danger.

"It's getting heavier," said Cheektowaga resident Thomas Mudd Jr., who with his wife spent several hours shoveling 4 to 5 feet off their roof. "It's supposed to warm up and we're supposed to get rain on the weekend, which will make it even heavier. So I didn't want my roof collapsing."

At least 13 people in western New York died during the storms, mostly from heart attacks and exposure, authorities said. The most recent victims were two elderly residents of a nursing home that was evacuated amid concerns of a roof collapse, Deputy Erie County Executive Richard Tobe said Friday.

"No matter how you cut it, this event will end up in the top five for the Lake Erie area."

More than 50 people were evacuated from several mobile home parks in suburban Cheektowaga and West Seneca because roofs were buckling. Bellevue Fire Department Lt. Timothy Roma said more than a dozen buildings and carports collapsed, as did a metal warehouse operated by a Christmas decorations company, where damage was estimated in the millions.

"No matter how you cut it, this event will end up in the top five for the Lake Erie area," said National Weather Service Director Louis Uccellini.

Local media reported that about 180 residents of a Cheektowaga assisted living facility were evacuated after staff members noticed the ceiling bulging under the weight of the snow.

Some Buffalo-area schools were closed for the fourth day, burning through snow days with winter still a month away.

A stretch of the New York State Thruway through western New York remained closed, with more than 300 truckers idled at truck stops and service areas, waiting for the highway to reopen.

Amtrak has continued to restore rail service through the region, but with modified schedules.

With deliveries interrupted, some grocery stores reported running low on staples like bread and milk.

Even for the Buffalo area -- one of the snowiest and hardiest places in America -- this was one for the history books. The three-day total is close to the nearly 8 feet that the region typically gets over an entire year.

Because the Buffalo area is so snowy, building codes require homes and businesses to be able to handle up to 50 pounds per square foot on their roofs, which would be about as heavy as a slab of concrete 4 inches thick, according to Mark Bajorek, a structural engineer.

As anyone who has ever shoveled snow knows, its weight depends in part on how wet or fluffy it is, not just on how deep it is. But Bajorek said some buildings may be close to that limit now, with more precipitation on the way.