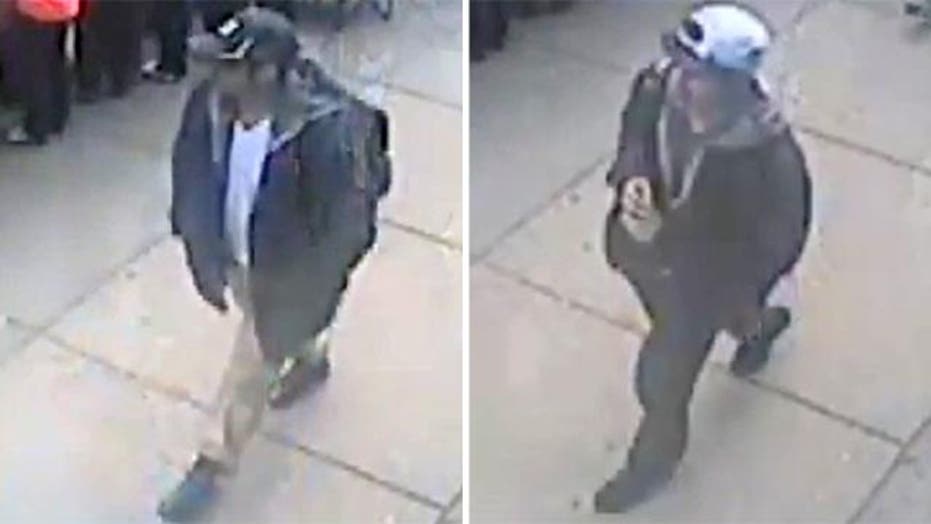 The FBI has identified two suspects in Monday's the Boston Marathon bombing, releasing photos and video showing them and asking the public to help locate them.

The suspects, one of whom wore a a dark baseball-style cap and the other who wore backwards white baseball-style cap, appear to be in their twenties and were captured on footage near where one of two explosions killed three and injured 176. In video that appears to be from a surveillance camera and which was shown by the FBI, both suspects are walking west on Boylston Street, near the finish line and where the explosions occurred.

"We consider them to be extremely dangerous and armed," said FBI Special Agent Rick DesLauriers. "With the media's help, we know the public will create a critical role in locating these suspects.

"The nation is counting on those with information to come forward," he added, urging anyone who recognizes the men to call 1-800-CALL-FBI or go to the bureau's website for online tips.

DesLauriers said investigators first focused on one man, then realized he appeared to be working with another man.

"Through the last day or so, we developed a single person of interest," DesLauriers said. "Indeed, though that process we have identified a second suspect. We believe they are associated."

The second suspect was seen dropping a backpack as both walked single file on Boylston Street, where both of the bombs exploded, DesLauriers said. It is believed that was the second bomb, which went off 12 seconds after the first one, at about 2:50 p.m.

It could not be determined from the photos whether the suspect terrorists were homegrown of foreign, but DesLauriers said the pictures will be distributed internationally.

"Someobody out there knows them as friends, coworkers," DesLauriers said. "Although it may be difficult, we are counting on those [people] to come forward."

Authorities believe at least one of the bombs was a sealed pressure cooker laden with explosives and shrapnel, and may have been concealed in a backpack. Before the release of the images, amateur sleuths around the world have been examining widely circulated photos from the crowd, isolating on people with backpacks, but officials have warned against such speculation.

A mangled pressure cooker lid found atop a nearby building is believed to have been part of one bomb, and it and other pieces were being analyzed at an FBI lab. A battery and several pieces of shrapnel were also recovered and undergoing analysis. Fox News learned that the circuit board suspected of being used to detonate at least one of the bombs has been recovered, and that FBI investigators were also analyzing cellphone tower records to identify positive hits for signs of calls that may have been placed to trigger both explosions remotely.

Authorities are also interested in a battery believed to be used in one of the bombs, telling Fox News it was likely purchased with a remote control toy and then extracted the battery to use in the bomb. That could potentially make it easier to zero in on a suspect.

According to a FBI and Department of Homeland Security bulletin, the deadly shrapnel that caused the deaths -- including of an 8-year-old boy, and critical injuries to 17 -- included nails, BBs and ball bearings. The other device "was also housed in a metal container, but investigators could not say if that was also a pressure cooker.

An investigative source also told Fox News that there is a "significant social media footprint" on the bombings that is providing new leads to investigators. More than 30,000 social media messages were collected within a one-mile radius of the finish line in the 48-hour period surrounding the explosions - with "Twitter and Facebook lighting up" after the attack. The social media generated what are called link analysis charts - which showed "the relationships between social media messages that met investigative criteria." Investigators are especially interested in messages that seemed "out of place or coded," sources told Fox News.

Investigators are also examining if the bombs could have been assembled near the scene of the explosions, The Wall Street Journal reports, quoting a law enforcement official. The official says this possibility is being considered because transporting improvised devices over a significant distance could trigger a premature detonation.

Scores of victims remained in hospitals, but the death toll has not risen since Monday. The doctors from Boston Medical Center credited some recent advances to dealing with trauma from techniques used in Iraq and Afghanistan. For one, doctors and first responders used component therapy instead of a lot of IV fluids. Component therapy can be used to promote blood clotting.