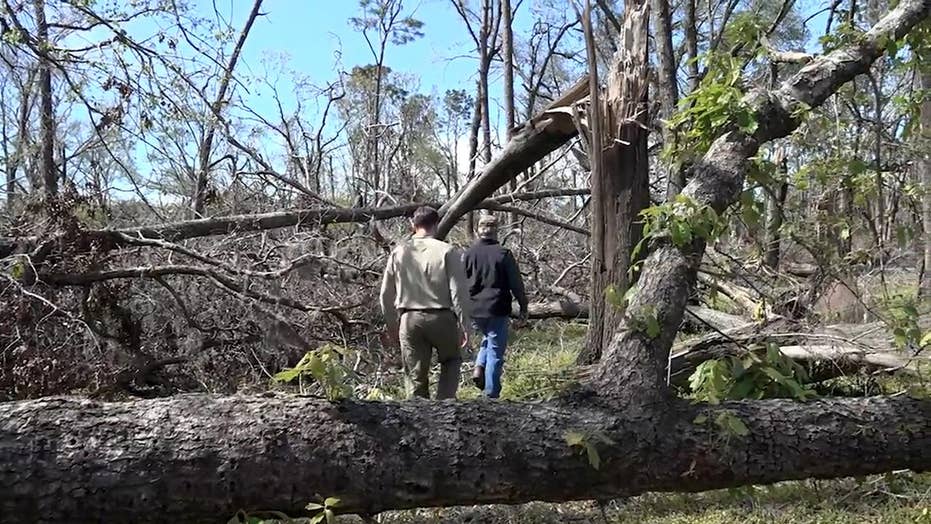 Forester, Scott Griffin, toured one timber farmer’s 230-acres, easily breaking off bark from a piece of fallen timber – a sure sign that quality of the tree is quickly declining. On another, he pointed out tiny holes, signaling bug infestations.

The thousands of destroyed trees belong to Glenn Earnest. His quick wit and step disguise his age well, but the timber farmer is two and a half harvests, or 77 years old – thus facing a grim reality after being forced to re-plant more than half of his crop.

It takes nearly 30 years for timber to come to harvest, and last October, when Hurricane Michael unleashed 115mph winds at the Florida-Georgia Line, Ernest’s trees were less than five years away from optimum growth.

He is still in the cleanup process, as is evident when you walk beneath and over a tangled mess of snapped and uprooted trees.

“My generation will never see it again as it was yesterday,” Earnest told Fox News, standing next to a snapped pine, which thankfully fell away from his home. He said, at this point, he’s planting “for my grandkids, not for me.”

Farmers are still scrambling to find temporary solutions ahead of planting season, which for most crops falls in March and April, facing $2.5 billion worth of agricultural losses across the state. Even with low-interest loans and crop insurance payments, many farmers are turning to amortizing past debt, according to Joe Brannen with the Georgia Bankers Association.

After disaster relief failed to make it into the latest federal budget, which blindsided many Georgia lawmakers, Sens. David Perdue and Johnny Isakson are spearheading another effort, introducing a stand-alone bill to Congress Tuesday.

“The timing is absolutely critical that we get this done right away,” Perdue told Fox News. With planting season quickly approaching, some farmers say they will not be able to plant without at least the promise of monetary assistance on its way. Perdue also pointed out that many farmers’ short-term loans are coming to an end, forcing farmers to find new temporary solutions.

The funding package includes $13 billion for overall disaster relief, but it’s not just for Hurricane Michael victims; if passed, it would also provide assistance for the aftermath of Hurricane Florence in North and South Carolina and wildfires in California. Notably, Puerto Rico will receive a $600 million chunk of the package, which Perdue credits as the source for the initial impasse over the appropriations when he was trying to pass it as part of the federal budget earlier this year.

“The president has now lost patience and is driving this,” Perdue said. “I talked to him [last week] and he said he would sign a stand-alone bill with the Puerto Rico assistance.”

The monetary loss is particularly severe for generational crops, like timber or pecans, which require decades of tending to before harvest. Griffin said these types of crops frequently are used as a means to pay for college or build a new house.

“I had put my life pretty much on cruise control, and I thought I’ll stand back...I’ll watch it and enjoy,” he recalled. “But when I went out [the next] morning, I realized my plan, wasn’t God’s plan.”

Farmers have received some financial help from the state, after a special legislative session at the end of last year, but in many cases, that assistance is just a drop in the bucket.

For instance, the state allotted $20 million to divvy out among timber farmers for their cleanup operations, but the state received $115 million worth of requests for that aid, according to Griffin.

He is hopeful Congress passes the disaster relief. “We’re hoping that all of these programs can come together, and everybody’s doing a little bit here, a little bit there, to really address the overall need that’s in the area, which is quite great,” Griffin said.

Jeffrey Dorfman, an economics professor at the University of Georgia, helped the state quantify how much of a financial toll the hurricane took on Georgia’s agricultural community. He said for generational farmers like Earnest, “to catch up could be decades.”

“Normally if you’re crop is destroyed, there’s crop insurance to cover it, but people don’t normally insure their pine trees or their pecan orchards because it’s not necessary, well we just found out, now it’s necessary,” he told Fox News. “[Southwest Georgia] is just not a place you would bother to prepare for hurricanes.”

Hurricane Michael snapped trees that have stood on Earnest’s property for nearly 200 years.

“I never even thought worst-case it could be this bad,” Dorfman said.

Stepping over his smashed fence and leaning past a snapped 60-year-old pine, Earnest bent down to pick a beautiful pink rose. He said he always tries to find the good in life, even when everything around him has literally fallen.

“Where would any of us be without hope?” Earnest asked. “We plant a crop for next year hoping we get rainfall, hoping we have a successful market to deliver it to, hoping we have good health to enjoy it. What difference is it today in saying I hope the future brings us success?”