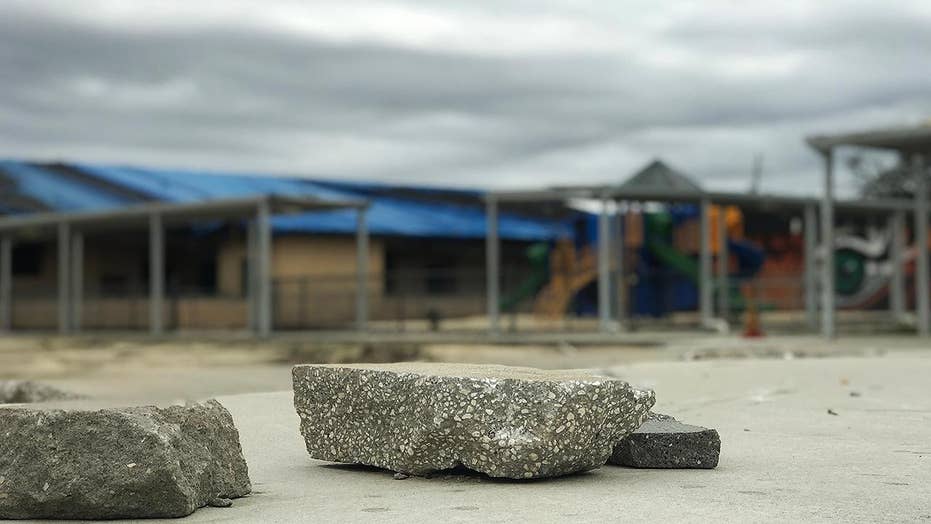 After a month off school due to damage from Hurricane Michael, he returned November 13 to a restructured high school—portables consumed the fields behind the school, not only accommodating ninth through 12th grade, but also holding classes for sixth through eighth after a local middle school was wiped away during the storm.

School days were split to be able to accommodate all the students throughout the day. Most elementary school times have been adjusted to begin at 8 a.m. to avoid transportation conflicts, while the older kids’ classes begin later in the day.

Most schools had between 10 and 14 minutes added to their schedule each day to make up for lost instructional time in the aftermath of the storm, particularly important for 11th and 12th graders in the process of applying to college.

Many of their friends moved away with their families after the storm, leaving hallways filled with mostly unfamiliar faces.

"Some have been trying to come back but they just don't know when or how because their house was destroyed," Sims said. "A hurricane happened and although it happened months ago, we're still traumatized to this day…Hurricane Michael came in took half of our senior year away."

When Hurricane Michael hit the Florida Panhandle four months ago, it left damage across an 80-mile swath, leveling homes and schools. The school board now has tough decisions to make for the hundreds of students who stayed.

For Rutherford High School Principal Coy Pilson, school might be back in session after the third-most powerful hurricane to strike the U.S., but life is far from normal.

“We've lost about 200 students. We've lost close to 20 percent of our population,” Pilson said. “Our challenge is trying to have school when you're doing construction.”

English teacher Pamela Darrow can attest to that.

“The roof of the library was gone, the roof of our building was gone…I finally got to see my classroom…there were tubs and hoses drawing things out,” she said.

The Category 4 storm with 155 mph sustained winds, just 1 mph below the threshold for a Category 5 designation, left an estimated $25 billion in damage and 75 dead.

Bay District school enrollment dropped nearly 15 percent, with elementary schools hit the hardest, down 25 percent. Over 180 employees left the area and the federal government now classifies 4,500 students as homeless because their houses were uninhabitable after the storm.

“It's catastrophic on a scale none of us ever saw coming,” said Bay District Schools Superintendent Bill Husfelt.

An estimated $350 million worth of damage led the superintendent to recommend several school closures, mergers, rezoning and mothballing—a term used when a school is closed but still maintained so it can be reopened whenever practical.

“Having a school at 60 percent capacity is not really wise…we need to utilize the facilities we have at maximum capacity," he said, "it's very selfish, we’re as selfish as we’ve ever been right now, we want to rebuild.”

With school closures come the concern of employee layoffs.

Husfelt said he is putting his trust in the state legislature to avoid job loss, but if it doesn’t approve funding, the district will have no choice but to consider layoffs. The legislative session begins on March 5.

“My goal is not to fire anybody or lay anybody off, but if we don't tighten our own belts it'll be done for us. So we probably won't hire any teachers or administrators coming up,” he said.

“We probably have 30 schools that are going to have  to  have the  roofs  totally replaced, we've  got  many  buildings that were just  totally  destroyed...we had  two  gymnasiums  that  basically just blew  the  roof  off  of  them  and  collapsed," detailed Superintendent Bill Husfelt of the damage to Bay District Schools from Hurricane Michael.

Another concern is the mental health of students and staff that are living in the traumatic aftermath of the storm. Bay District Schools officials sent a letter to Commissioner Richard Corcoran with the Florida Department of Education requesting that the graduation requirement of some be waived and that the state set aside $2 million for a long-term mental health plan.

It also asks the department to take the storm’s impact into consideration when it comes to students’ standardized testing this year.

“The kids are still reeling from what they've been through, so it's been kind of hard to get them back into the swing of things,” Darrow said.

Cleanup and recovery from Hurricane Michael has been slow, costly and ongoing. As donations to the area stall and media coverage fades, some residents of the “Forgotten Coast” fear the area is living up to its name.

“We're not making the news anymore,” said Darrow. “There are people now who almost have panic attacks every time the wind starts blowing…people are scared to death because it happened. You never think it will.”

The school board will advertise the recommended closings before taking a final vote in a March 12 meeting. If approved, the closures will take effect next school year and remain until the community is rebuilt and students return to the area.

In the meantime, the district plans on continuing its work with FEMA to repair and remodel schools that currently are out of commission.