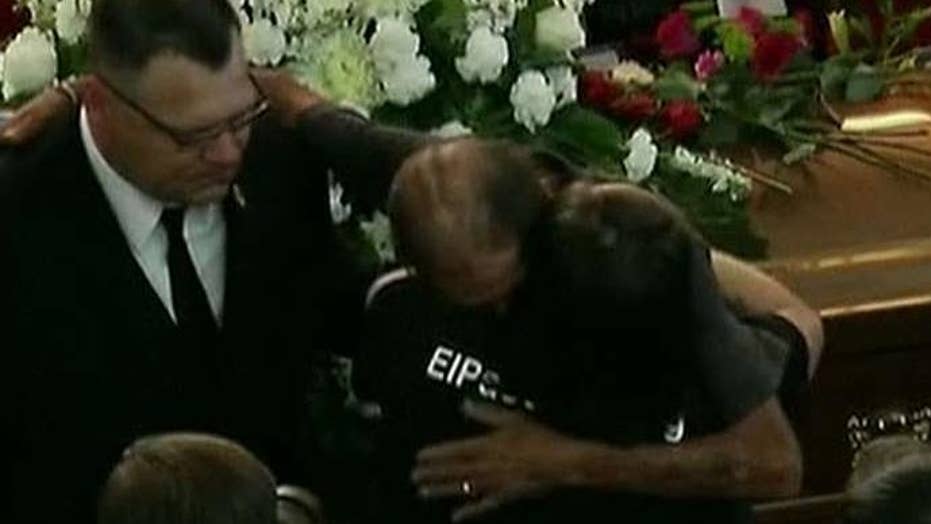 Soon after a man buried his longtime partner in a funeral attended by hundreds of strangers last week -- in the wake of the massacre inside an El Paso, Texas, Walmart -- it emerged that her SUV had been stolen and vandalized.

Antonio Basco, 61, of El Paso, made headlines when he invited the public to attend the funeral of Margie Reckard, 63, because they didn't have nearby relatives.

Reckard was one of 22 people shot and killed inside the Walmart on Aug. 22. The killer said he targeted Mexicans and warned of a "Hispanic invasion" of Texas.

This past Friday morning, hundreds of people from all over the country – including from Dayton, Ohio, the site of a mass shooting shortly after the attack in El Paso – filled up the La Paz Faith Memorial & Spiritual Center. A line snaked around the church and on the blocks beyond. Hundreds of flower arrangements were also sent.

However, Vanessa Kondow revealed on Facebook that somebody had stolen and wrecked Reckard's Ford Escape, perhaps as recently as Saturday night, the day after the funeral. Kondow said she and her husband, who both work at a towing company, towed the damaged vehicle to Basco's home after it was found.

"WTF is wrong with people!? He just buried his wife yesterday and now this s---," Kondow wrote. "He told my husband that whoever took it also stole a pressure washing machine from a small trailer he used to use for mobile car washing. Share the s--- out of this post to find the m------ who would do this."

Kondow did not immediately respond to a Fox News request for comment.

Angel Gomez with Operation Hope, which coordinated many of the funerals for the victims, confirmed to Fox News that Reckard's Ford Escape had been stolen and trashed.

He said he spoke with Basco about the incident and expected to speak with him again about getting him a new car or repairing the existing vehicle. Casa Ford in El Paso confirmed to KVIA-TV that it would help to get Basco a replacement vehicle.

Some commenters on Kondow's post offered to help Basco get a new car.

"Just so you all know. Mr. Basco does not want a new vehicle. The Ford Escape was his wife's and he's always wanted to keep it. He has a vehicle of his own. If anyone wants to help, he most likely just wants the Escape to be repaired so he has that memory of his wife, Margie," Kondow posted.