Known as Mexico’s most notorious drug lord, Guzman was convicted in New York on Feb. 12, 2019, of running an industrial-scale smuggling operation. He was sentenced to life in prison in July of that year.

At the trial, Guzman’s lawyers argued he was the fall guy for other kingpins who were better at paying off top Mexican politicians and law enforcement officials to protect them while the U.S. government looked the other way. They said witnesses’ descriptions of El Chapo leading a lavish lifestyle featuring private planes, beachfront villas and a private zoo were overblown, and that there’s no chance the U.S. government could collect the multibillion-dollar forfeiture. 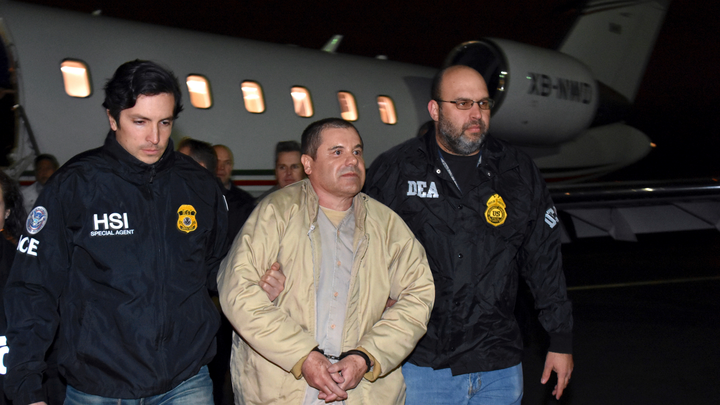 Guzman, whose two dramatic prison escapes in Mexico fed into a legend that he and his family were all but untouchable, was extradited to the United States in 2017.

As Mexico’s most powerful drug lord, he ran a cartel responsible for smuggling mountains of cocaine and other drugs into the United States during his 25-year reign, prosecutors said in court papers.

Under Guzman’s leadership, the Sinaloa cartel – one of the world’s largest drug trafficking organization – was responsible for multiple murders and smuggling mountains of cocaine and other drugs into the United States. Prosecutors also previously said his "army of sicarios," or "hit men," was under orders to kidnap, torture and kill anyone who got in his way.

In this courtroom sketch, Joaquin "El Chapo" Guzman, second from right, listens to his sentence via interpreter while surrounded by U.S. Marshals and flanked by his defense attorney Marc Fernich, during his sentencing in federal court, Wednesday, July 17, 2019, in New York. (AP)

He offered no remorse at the time of his conviction and, instead, took a jab at the Brooklyn federal court judge by accusing him of making a mockery of the U.S. justice system in refusing to order a new trial based on unsubstantiated allegations of juror misconduct.

"My case was stained and you denied me a fair trial when the whole world was watching," Guzman said through an interpreter.

He is now serving a life sentence at the federal supermax prison facility in Florence, Colorado, where inmates are held alone for 23 hours a day and have little human interaction.

He first escaped from prison in 2001 and then spent more than a decade on the run before he was recaptured, only to escape again in 2015 via a mile-long tunnel dug to the shower in his cell.

The 2015 getaway was highly embarrassing for the government of Mexican President Enrique Pena Nieto. He allegedly escaped from the Altiplano prison through an entry under the shower in his cell to a mile-long lit tunnel with a motorcycle on rails. 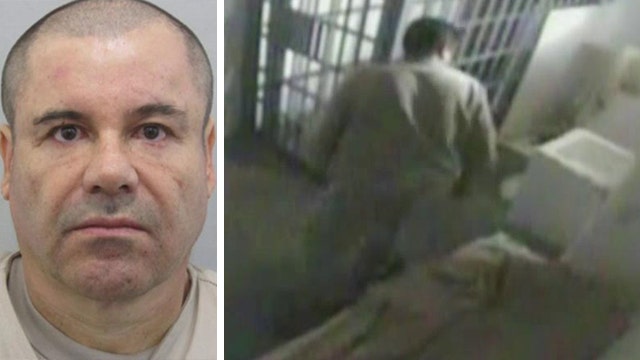 Recently released court papers reveal how the extensive plot included purchasing a piece of land near the prison, firearms and an armored truck, and smuggling him a GPS watch so co-conspirators could "pinpoint his exact whereabouts so as to construct the tunnel with an entry point accessible to him."

EL CHAPO ADMITTED WOMEN WERE HIS ONLY ADDICTION

It was while on the lam the second time, in fall 2015, that he held a secret meeting with actors Sean Penn and Kate del Castillo. The encounter was the subject of a lengthy article Penn published in Rolling Stone, right after Mexican marines re-arrested Guzman in the western state of Sinaloa.

In the interview, Guzman was unapologetic about his criminal activities, saying he had turned to drug trafficking at age 15 simply to survive.

"The only way to have money to buy food, to survive, is to grow poppy, marijuana, and at that age, I began to grow it, to cultivate it and to sell it. That is what I can tell you," he was quoted as saying in Penn’s article.

Guzman is married to 31-year-old Emma Coronel Aispuro, a former beauty queen who is more than 30 years younger than her husband. The two have been together since at least 2007, and their twin daughters were born in 2011.

On Monday, Coronel Aispuro was arrested at Dulles International Airport in Virginia and accused of helping her husband run the cartel and plot his audacious 2015 escape.

She is a dual citizen and was charged with conspiracy to distribute cocaine, methamphetamine, heroin and marijuana in the U.S. She was ordered held behind bars during her Tuesday court appearance.