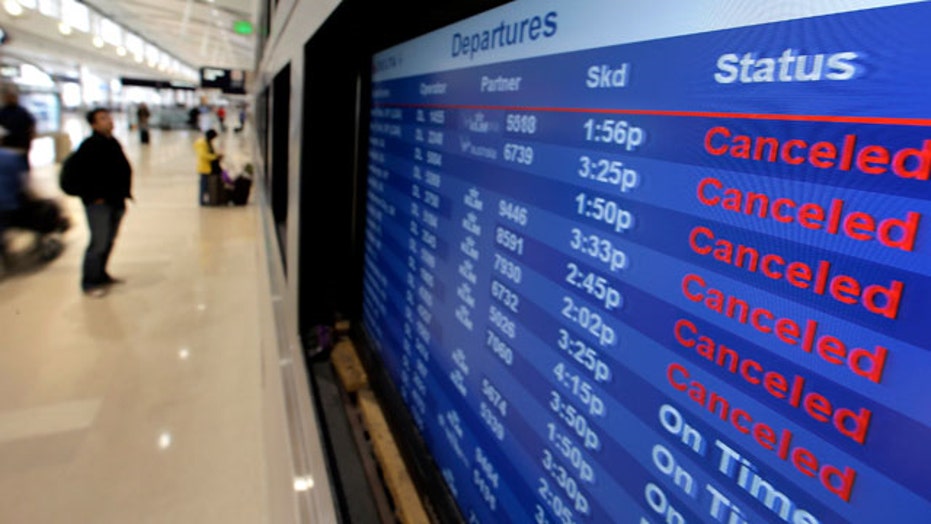 Drivers throughout the East Coast are facing slippery and slushy roads Friday, a day after heavy snow, sleet and freezing rain slammed the region, snarling travel and forcing airlines to cancel thousands of flights across the country.

The bad weather continued overnight in some places — just in time to delay tens of thousands of deliveries of Valentine's Day flowers — as a wintry mix fell on roads already covered in many parts of the Northeast with deep puddles and icy patches.

Television news helicopter footage showed several tractor-trailers and a number of cars completely blocking the eastbound lanes in what appeared to be a series of accidents that had backed traffic up for miles.

An ambulance was shown at the scene but there was no immediate word about injuries.

By the time it stopped snowing in Pennsylvania, 22.5 inches of snow was reported in Somerset County, 20 inches in Berks and York counties, and almost 19 inches in Allentown, according to the National Weather Service. Parts of upstate New York got between 12 and 27 inches of snow.

Philadelphia had nearly 9 inches, its fourth 6-inch snowstorm of the season — the first time that has happened in the city since record-keeping began in the late 1800s. New York City received nearly 10 inches, and parts of New Jersey had more than 11.

The sloppy mix of snow and face-stinging sleet grounded more than 6,500 flights nationwide on Thursday and closed schools, businesses and government centers. About 1.2 million utility customers lost power as the storm moved from the South through the Northeast, dropping to about 440,000 outages by Friday morning, mostly in South Carolina and Georgia.

"Every time it snows, it's like, "Oh, not again,'" said Randal DeIvernois of New Cumberland, Pa., which had about 10 inches of snow by midafternoon Thursday. "I didn't get this much snow when I lived in Colorado."

By Friday morning, the number of flight cancellations dropped to about 1,110 nationwide. Many schools remained closed in Connecticut, Maine, Massachusetts, New Hampshire, New York state, Pennsylvania, Vermont and Virginia, while some in Rhode Island were opening late.

Another storm was already showing signs of hitting parts of the Northeast between Saturday afternoon and Sunday morning. More than 6 inches of snow is expected to fall in parts of southeastern Massachusetts, according to MyFoxBoston.com.

The treacherous weather was blamed for 21 deaths, many of them in motor vehicle accidents.

In New York, Min Lin, 36, died after she was struck by a utility vehicle with a snowplow attached to it as it backed up outside a shopping center in Brooklyn. She was rushed by paramedics to a nearby medical center, where her nearly full term, 6-pound, 6-ounce baby was delivered via cesarean section, hospital spokeswoman Eileen Tynion said.

The baby was in critical condition in the neonatal intensive care unit, she said.

No immediate charges were brought against the snowplow operator.

Across the South, the storm left in its wake a world of ice-encrusted trees and driveways and snapped branches and power lines.

In South Carolina, about 242,000 homes and businesses were without power Friday morning, and officials warned it could be next week before it is restored for everyone.

The worst damage was in rural areas outside of Columbia and Charleston, mostly served by smaller utilities under The Electric Cooperatives of South Carolina.

"Some of our co-ops have never seen the damage on this scale before. For them, this has been a storm of historic proportions," said Todd Carter, vice president of loss control and training for the organization.

Gov. Nikki Haley planned to visit Aiken and Walterboro on Friday to look at some of the most heavily damaged areas.

Around the country, this is shaping up as one of the snowiest winters on record. As of early this month, Washington, Detroit, Boston, Chicago, New York and St. Louis had gotten roughly two or three times as much snow as they normally receive at this point in the season.

The procession of storms and cold blasts — blamed in part on a kink in the jet stream, the high-altitude air currents that dictate weather — has also cut into retail sales across the U.S., the Commerce Department reported Thursday. Sales dipped 0.4 percent in January.