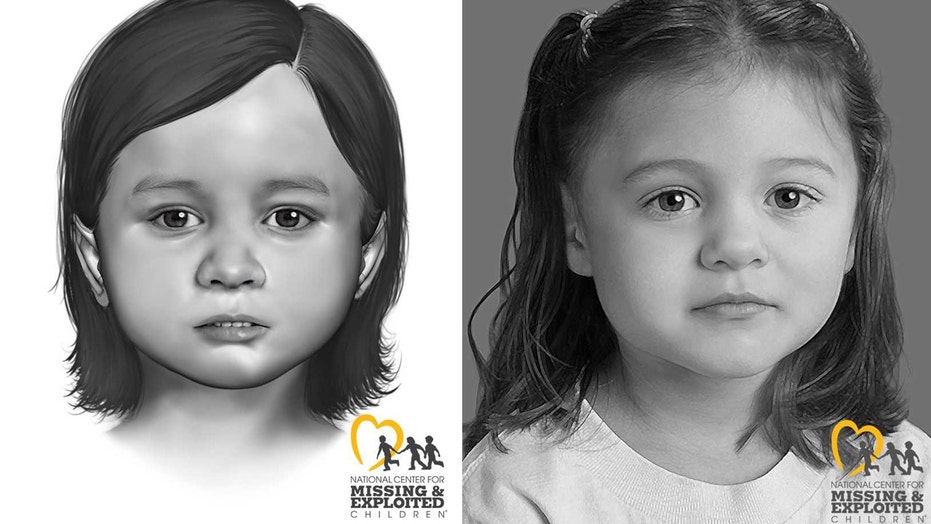 Police in Delaware released facial reconstruction images Monday in the hope of identifying a young girl whose remains were found last month.

The Smyrna Police Department says the girl was between the ages of 2 and 5, had wavy brown hair, and was Caucasian or Hispanic. She was found in September next to the Little Lass softball fields.

"Somebody [was] down there, visiting the park, it's open to the public, they had their dog with them. Dog wanders off, comes back with what looked like a bone fragment," Smyrna Police Cpl. Brian Donner told News Radio WDEL. "At which point, that person notified the police."

GIRL FOUND DEAD IN SUITCASE IN TEXAS 3 YEARS AGO MAY HAVE BEEN FROM ARIZONA, OFFICIALS SAY

Smyrna police in Delaware released these images in hopes of identifying remains of a little girl found near softball fields in September. (Smyrna Police Department)

Donner said investigators were analyzing evidence found at the scene to determine if the body had been set on fire, according to the station.

Investigators haven’t said how the child died, but believe the girl died weeks before the remains were found, if not longer.

“An anthropological exam of her remains suggests that she suffered from chronic illness,” the department added in a news release.

Forensic artists with the National Center for Missing and Exploited Children came up with the digital reconstruction.

In a Facebook post, Smyrna police said the case had no connection to the Dulce Marie Alavez missing child case in southern New Jersey.

“Their child [Alavez] went missing [three] days after we discovered the remains of ours,” the post said. “These children, while resembling one another, are conclusively separate."

Dulce, 5, hasn't been seen since disappearing from a park in Bridgeton, possibly in an abduction, police said.

Anyone with information about the Delaware case should contact detective Bill Davis at 302-653-3490.