Family Dollar is the last place Collier was seen alive. The 59-year-old office manager found stripped naked and burned in the woods off a rural highway earlier this month just down the road from here on September 11, 2022.

FIRST ON FOX: Debbie Collier, the Georgia office manager found stripped naked and burned in the woods off a rural highway earlier this month, was last seen alive at a Family Dollar store down the road from the gruesome crime scene, a law enforcement source tells Fox News Digital.

Collier was seen buying a red tote bag, tarp and lighter similar to those found uphill from her remains on Sept. 11, police have confirmed.

Workers at the retail store and the shopping center's landlord confirmed that police had visited the location and taken copies of surveillance video recorded on Sept. 10, the day that Collier's husband and daughter reported her missing.

Amanda Bearden, Collier’s 36-year-old daughter, told police that evening that she received a $2,385 payment from her mother over Venmo along with a strange message, grew afraid and, along with Steve Collier, her stepfather, filed a missing-person report with the Athens-Clarke County Police Department in her hometown an hour away. 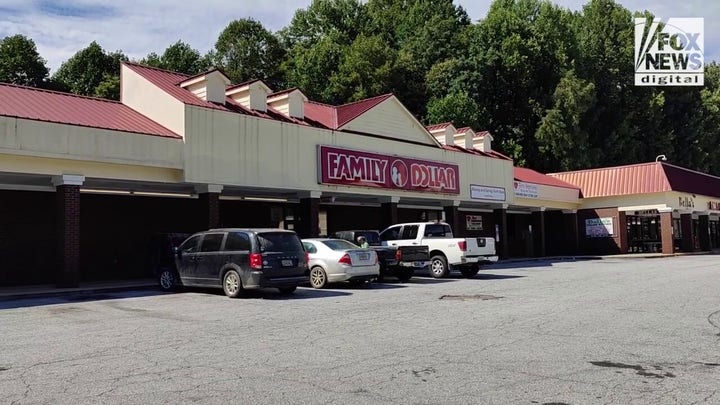 A spokesperson for the Habersham County Sheriff's Office on Monday said investigators were reviewing surveillance video taken at the Family Dollar store for the entire day of Sept. 10. In a press statement, the sheriff's office confirmed obtaining the surveillance video and Collier's purchase receipt from the store.

"Investigators did obtain footage that shows the victim, Deborrah Collier, entering the store on September 10th at 2:55 p.m. and remaining there until 3:09 p.m. In the video, the victim appears to be calm and not in fear of anything. All video footage obtained from the store and surrounding businesses reflect that the victim was alone in the van at the time she visited the store.

"Investigators were further able to determine that the victim purchased a rain poncho, refillable torch lighter, a 2-roll pack of paper towels, a 7.5x9.5 OBD Tarp, and a reusable tote bag. This was confirmed by obtaining a copy of the store receipt and a copy of the video footage from the store security cameras.

"This information allows investigators to narrow the time of death to a window beginning at 3:09 p.m. on Saturday, September 10 to the discovery of the body on Sunday, September 11 at 12:44 p.m."

Investigators found Collier naked and burned, with "charring" on her abdomen, clutching at a tree down an embankment a quarter-mile from her vehicle, which had been abandoned on Route 15 near Victory Home Lane. The Venmo payment included a bizarre message that suggested she was being held against her will.

"They are not going to let me go love you there is a key to the house in the blue flowerpot by the door," the Venmo message reads.

Investigators, however, publicly ruled out both kidnapping and suicide last week.

Amanda Bearden, the Venmo recipient who Fox News Digital has learned is well known to her hometown police department, has a rap sheet going back more than a decade for numerous domestic violence calls involving different men with whom she has been romantically linked, according to reports obtained by Fox News Digital.

The entrance to the crime scene where Debbie Collier was found dead is marked with a makeshift memorial in the shape of a cross. (Mark Sims for Fox News Digital)

Collier's son, Jeffrey Bearden, in an emotional statement Saturday, asked for an end to speculation as police complete their investigation.

Flowers are shown at the entrance to the crime scene where Debbie Collier was found dead. (Mark Sims for Fox News Digital)

"I will never be able to fully articulate the loss of my mother and what she meant to me," Bearden said. "She was my longest source of love, support, and encouragement. My mother was a very, vibrant and strong soul. She was a person who valued kindness, empathy, and understanding throughout her entire life. She went through life recognizing the beauty and grace in everything she saw and experienced around her."

Police have served several search warrants in the case, including one at Amanda Bearden's home, but they have not publicly identified any suspect or person of interest.