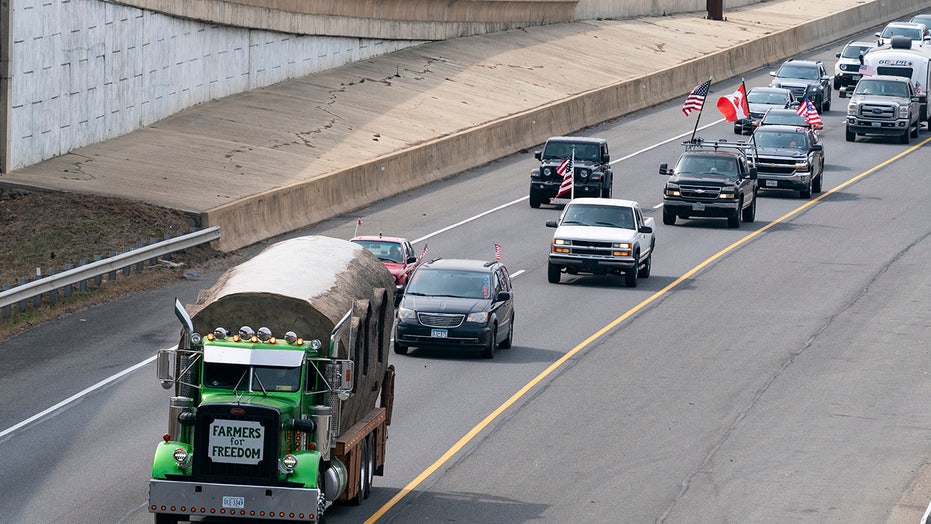 Representatives of the trucker convoy that traveled to Washington, D.C., over the weekend from across the country say they’re not leaving and will continue to loop the Beltway until lawmakers "hear our stories."

Members of the People’s Convoy met with Republican U.S. Sens. Ted Cruz, Texas, and Ron Johnson, Wisc., in the capital on Tuesday to give voice to their protest against COVID-19 mandates and other issues surrounding the pandemic.

DC TRUCKER CONVOY TO RETURN TO BELTWAY, BACK UP TRAFFIC BUT WILL NOT ENTER CITY

When asked about the group’s next steps, Brian Brase, the convoy’s co-organizer, told reporters that "we’re not going anywhere."

A convoy of trucks and other vehicles travels the I-495 Capital Beltway near the Woodrow Wilson Bridge, to protest mandates and other issues, Sunday, March, 6, 2022, in Fort Washington, Md. (AP Photo/Alex Brandon)

Brase and other representatives said they take issue with vaccine and mask mandates, and state and federal response to the pandemic, and demanded that lawmakers and health officials investigate the origins of the COVID-19 virus.

Brase emphasized that the convoy wasn’t against vaccines.

A convoy of trucks and other vehicles travels the I-495 Capital Beltway near the Woodrow Wilson Bridge, to protest mandates and other issues, Sunday, March, 6, 2022, in Fort Washington, Md. (AP Photo/Alex Brandon)

Vehicles with the People’s Convoy traveled from across the U.S. and have driven loops around the Capital Beltway since Sunday before returning to the convoy's staging area in Hagerstown, Maryland. The group has driven slowly to impact traffic and make their point to lawmakers.

Brase was previously heard telling members of his group over the weekend that they would avoid driving into D.C. proper on Monday and Tuesday, and instead stick to the surrounding Beltway.

The convoy follows similar demonstrations by truckers in Canada who protested vaccine requirements to cross the Canadian border.

Authorities in D.C., Maryland and Virginia have said they will monitor the demonstration activities. Travelers were advised to consider alternate modes of transportation.