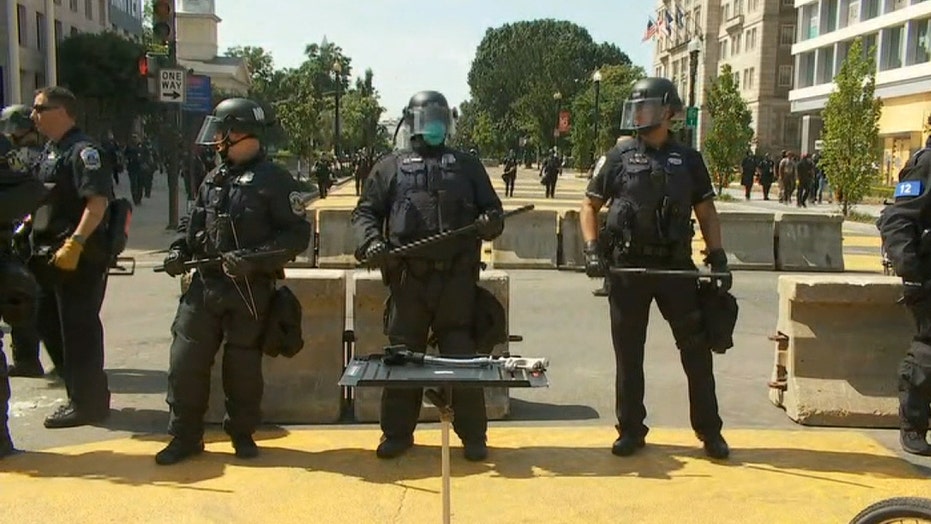 A Daily Caller reporter was swarmed and shoved by protesters in Washington, D.C., on Monday night before police stepped in to protect her, according to a report by the outlet.

Shelby Talcott attended a protest near the White House and chronicled her own experiences covering the night's events on social media until things took a negative turn – and she became the story.

“Tonight I was accused of being a cop and assaulted by protesters,” Talcott tweeted shortly after the incident. “I was pushed towards the police line where some officers grabbed me and pulled me to safety. I was handcuffed but not arrested, and they released me in a safe area.”

A police spokesperson did not immediately respond to Fox News’ request seeking comment and information, but videos posted to social media show the moments leading up to the reported assault.

Footage tweeted by the Daily Caller, which was taken by the outlet's other reporters at the scene, shows a woman confronting Talcott about taking her picture.

“I think she’s serious, I think she will f--- you up,” another person can be heard telling Talcott in the video.

Protesters can be heard telling Talcott not to record, to which she responds, “I’m not."

“You should leave before your s--- gets destroyed,” another person can be heard telling Talcott, as the crowd yells at her to “get the f--- out.”

A second video shared by the outlet shows the confrontation from a different angle. Protesters can be seen in the footage getting in the reporters’ faces, hitting their phones and pushing Talcott as the person recording the interaction can be heard shouting, “I’m press. I’m press.”

As the footage continues, the protesters can be seen pushing Talcott further as she tells them, “I’m a reporter.”

Someone can be seen slapping the bill of Talcott’s baseball cap shortly before the video cuts out.

In a tweet, the Daily Caller called the assault “completely unacceptable.”

Neil Patel, founder and publisher, said, "Daily Caller's reporters on the ground have been putting out some of the best coverage of the recent protests and riots due to their bravery, aggression and honest take on what’s happening. They are there to report the truth and not to fit the facts into any preconceived narrative. Nobody has done this better than Shelby Talcott. The fact that she would be assaulted for doing her job and telling it straight should alarm anyone who cares about press freedom.”

That same night, protesters tried to pull down a statue of President Andrew Jackson near the White House before being dispersed by police.

WUSA-TV in the nation's capital reported that police used pepper spray to move protesters out of Lafayette Square, where the Jackson statue is located. Videos posted on social media showed that the protesters had climbed on the statue and tied ropes around it, then tried to pull it off its pedestal.

President Donald Trump tweeted late Monday that “Numerous people” had been arrested for “the disgraceful vandalism.” He added: “10 years in prison under the Veteran’s Memorial Preservation Act. Beware!”