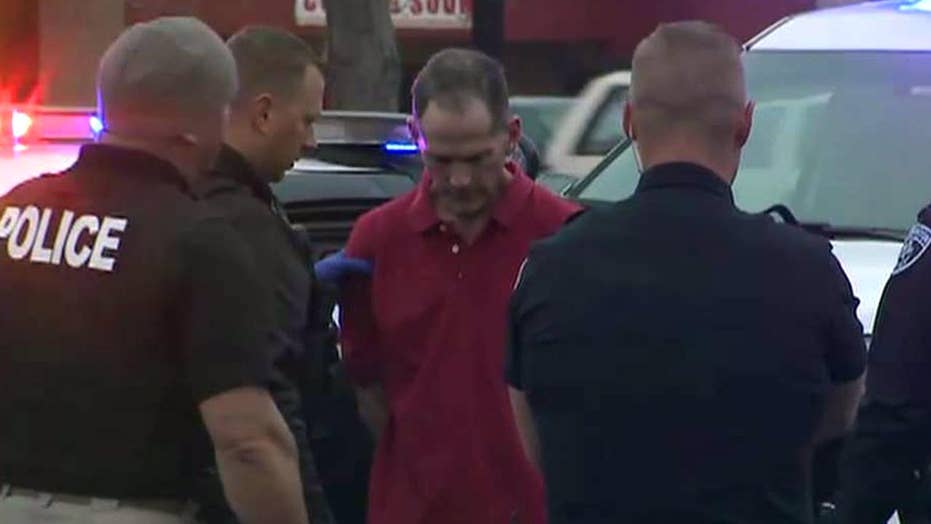 The "nonchalant" gunman who killed three inside a Denver-area Walmart Wednesday evening, sparking mass panic and an all-night manhunt, was nabbed during a raid on an apartment building just eight miles from the scene, police said.

Scott Ostrem, 47, was taken into custody without incident after police stopped his red Mitsubishi Mirage at an intersection less than 10 miles away from the Walmart he had attacked, FOX31 Denver reported.

Scott Ostrem, 47, was arrested Thursday and police were asking the public to contact them with any additional information on the suspect. (Thornton Police Department)

Authorities descended on an apartment complex believed to be associated with Ostrem after they received an anonymous tip. When they arrived, he was nowhere to be seen, but Ostrem's distinct red car was spotted driving past the apartment complex just before 8 a.m.

Officials issued a nationwide extradition homicide warrant earlier and called him "armed and dangerous." Police are still searching for a motive in the attack. Ostrem does not have an extensive criminal background.

Ostrem allegedly walked into the Walmart in Thorton, a suburb north of Denver, with a handgun just after 6 p.m. Wednesday and “nonchalantly” opened fire at the crowd of shoppers, according to police. Employees dashed to the back room and hid there when shots rang out. They then ran out of the back door about five to 10 minutes later, FOX31 Denver said.

“I was just picking up my last item and about to head towards the checkout,” a witness at the store told FOX31. “Heard two slow pops that sounded like they were coming from the front checkout area and then started to run as about four more shots rang out a little faster. At that point everyone was just running and screaming.”

Aaron Stephens, 44, was in the self-checkout line when he heard a single shot followed by two more bursts of gunfire before people started running for the exits.

"The employees started screaming. Customers were screaming. They were running like crazy, and I ran out too because I didn't want to get killed," he said.

Twitter users posted videos of mass chaos around the Walmart as emergency vehicles rushed to the scene. Guadalupe Perez was inside the store with her young son when she heard what she thought was a balloon popping. A Walmart employee told her someone was shooting, then Perez saw people running away yelling, "Let's go. Let's go. Leave the groceries."

"You see all these things in the news and you go through it, it's scary," she said. "But thank God we're OK and nothing happened to us."

Police said in a news conference on Thursday that it was "mass chaos" in the area and it took some time to be able to send a Walmart emplyee in to review surveillance video. Thorton police spokesman Victor Avila said the shooting appeared to be a random act and that there were no indications that it was an act of terror.

"This is a very heinous act," Avila said. "We don't know exactly what the motive of the person was, but it was certainly a terrible act."

North Suburban Medical Center told Fox News "two bystanders [were admitted] in stable condition." It was not immediately clear whether those injuries were part of the official total. Two men died inside the Walmart. The woman died later at a hospital. Authorities did not immediately release any other information about the victims.

Ragan Dickens, Walmart's director of national media relations, said in a statement to Fox News the company was "deeply saddened by this tragic event."

"Our thoughts, prayers and condolences go out to the families who lost loved ones and to all who were impacted by what took place. We are assisting law enforcement however we can and are referring all requests for information to them," the statement read.

Fox News' Alicia Acuna and the Associated Press contributed to this report.