CNN is likely to be hit with a massive lawsuit worth more than $250 million over alleged “vicious” and “direct attacks” on Covington Catholic High School student Nick Sandmann, his lawyer has told Fox News.

Lawyer L. Lin Wood discussed his decision to sue CNN for its reporting and coverage of his client during an interview airing Sunday night on Fox News Channel’s “Life, Liberty & Levin.”

“CNN was probably more vicious in its direct attacks on Nicholas than The Washington Post. And CNN goes into millions of individuals' homes,” Wood told Fox News host and best-selling author Mark Levin.

CNN couldn't resist the idea that here's a guy with a young boy, that Make America Great Again cap on. So they go after him

“Now you say you've seen the tape; if you took the time to look at the full context of what happened that day, Nicholas Sandmann did absolutely nothing wrong. He was, as I've said to others, he was the only adult in the room. But you have a situation where CNN couldn't resist the idea that here's a guy with a young boy, that Make America Great Again cap on. So they go after him.”

Wood continued: “The CNN folks were online on Twitter at 7 a.m retweeting the little one-minute propaganda piece that had been put out. … They're out there right away going after this young boy. And they maintain it for at least two days. Why didn't they stop and just take an hour and look through the Internet and find the truth and then report it? Maybe do that before you report the lies.”

Wood then detailed the timing of the suit, saying it will be issued “Monday, Tuesday at the latest.”

“I've got some young, smart lawyers that are working hard as we can," he told Levin. "Double-checking, and listen, when we file complaints, we've investigated it because we want to get it right. Maybe CNN can learn from that."

Fox News has reached out to CNN representatives for comment on the pending litigation.

Wood filed suit last month against The Washington Post. The suit calls for $250 million in compensatory and punitive damages over the paper's coverage of the confrontation, an encounter that went viral on social media. He told Fox News that the claim against CNN is apt to be even higher.

“I expect because of the way they went after Nicholas so viciously, that the claim for his reputational damage will be higher than it was against The Washington Post,” the veteran attorney said. 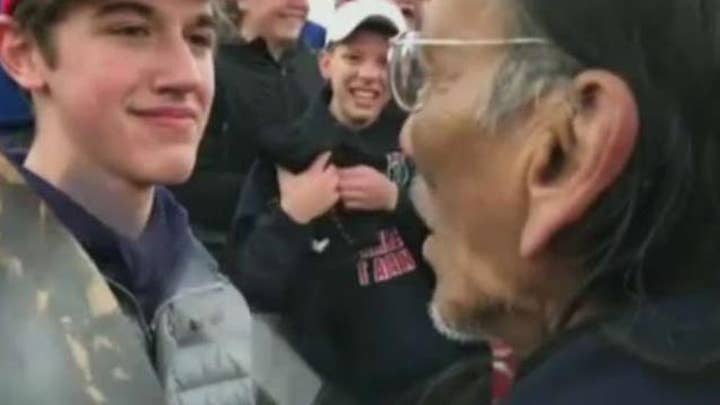 “I would think the punitive-damage award against CNN that we’ll seek will be at least the same $200 million as it was against The Washington Post. But the compensatory damage to Nicholas's reputation, that number I expect will be higher.”

The lawsuit against The Washington Post accused that outlet of practicing "a modern-day form of McCarthyism" by targeting Sandmann and "using its vast financial resources to enter the bully pulpit by publishing a series of false and defamatory print and online articles ... to smear a young boy who was, in its view, an acceptable casualty in their war against the president."

Several days ago, The Post published an editor’s note admitting that subsequent information either contradicted or failed to confirm accounts relayed in its initial article. The editor’s note was not satisfactory to Sandmann’s legal team.

Sandmann, a junior at Covington Catholic High School, became a target for outrage after a video of him standing face-to-face with a Native American man, Nathan Phillips, while wearing a red Make America Great Again hat surfaced in January. Sandmann was one of a group of students from Covington attending the anti-abortion March for Life in Washington, D.C., while Phillips was attending the Indigenous Peoples' March on the same day.

Sandmann and the Covington students were initially accused of initiating the confrontation, but other videos and the students' own statements showed that they were verbally accosted by a group of black street preachers who were shouting insults at them and the Native Americans. Sandmann and Phillips have both said they were trying to defuse the situation.

Last month, investigators hired by the Roman Catholic Diocese of Covington concluded that the students did not instigate the confrontation with Phillips. Bishop Roger Foys, who initially condemned the students' behavior, wrote in a letter to parents that they had been "placed in a situation that was at once bizarre and even threatening."