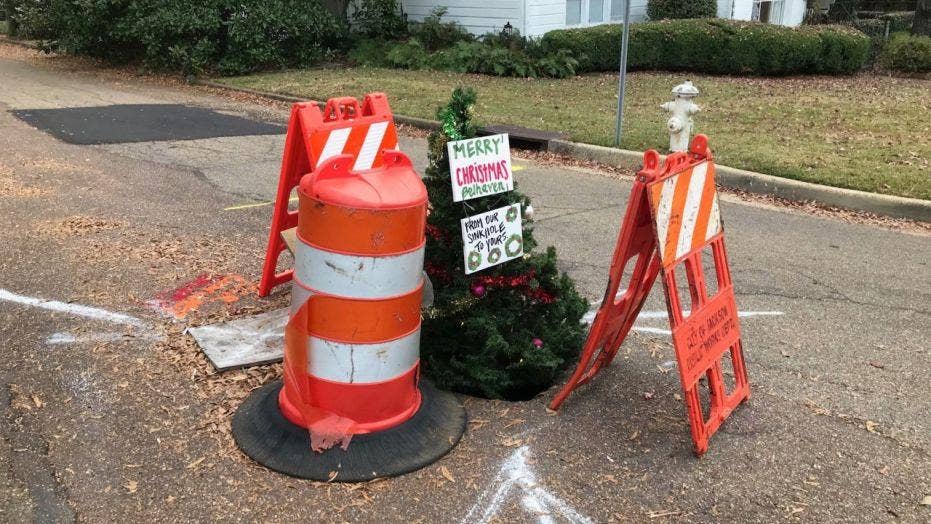 An unknown resident placed a Christmas tree inside a pothole in a Jackson, Mississippi neighborhood to call attention to the city’s crumbling roads.

Nestled between the intersections of two local roads in the Belhaven neighborhood of Jackson, Miss. is a Christmas tree like no other. After growing tired of waiting for repairs, an unknown resident placed the decorative tree inside a small sinkhole that sits in the middle of the street.

The festive holiday decoration had a sign that said: “Merry Christmas Belhaven. From our sinkhole to yours.” The sign was no longer there on Monday afternoon but the tree was lit up like, well a Christmas tree, to help drivers see the road hazard.

Several residents who live along the street say they are glad to see someone’s unique way of drawing attention to a problem plaguing the city. Damie Brenholtz says she’s had to replace two tires in the past couple of years because of large potholes that have ripped them apart.

“They won’t fix it so we might as well decorate it,” Brenholtz told Fox News outside her home. She’s just one of several residents who have complained for years about the pothole problem in the area.

“[It’s] a funny way to voice our frustration with the condition of the roads,” said Jack Berry, a first-time homebuyer who lives on the street where the tree was placed.

He said whenever someone visits him, he cautions them about the dangerous roads.

This isn’t the first time Jackson has been in the national spotlight for road conditions. Earlier this year a Jackson-area man posted a photo of himself in a ‘pothole hot tub’ in order to get the attention of city leaders.

Mississippi isn’t the only place in America with pothole problems. A recent report from the American Society of Civil Engineers (ASCE) estimates that 28 percent of roads in America are in poor shape, with an overall grade of D. Motorist pay about $120.5 billion, or $533 per driver, each year for vehicle repairs caused by poor road conditions. The average Mississippian pays an average of $705 per year.

Jacob Forrester, a civil engineer from Mississippi and the state captain for ASCE, said a significant investment is needed at the federal, state and local level to improve roads.

“We need to increase the spending on infrastructure from 2.5 percent of our GDP to 3.5 percent,” Forrester said. “About [a] $2-trillion investment is needed by 2025 or we’ll have much more of a deficit and it would be much more costly.”

He adds that state and local governments may have to raise taxes or create public private partnerships to cope with crumbling roads.

“It’s a picture a little bit of Jackson and of what the situation is here with our infrastructure,” said Jimmy Turner, who lives on the street where the Christmas tree was placed. “It’s very difficult for us who live in these areas where there are so many potholes and where we can’t seem to get a lot done about it.”

Turner says he’s called at least six times about other potholes in his neighborhood. According to local residents, the mini sinkhole on the road has been there for several months, maybe even a year.

Multiple people noted that a city work crew placed more cones and spray painted the pavement surrounding the pothole after local news outlets reported about the road hazard. But, they added, no repairs were made.

Kai Williams, Jackson's communications director, said a 1 percent sales tax was approved by residents a few years ago to repair crumbling infrastructure. She notes maintenance crews are aware of the road problems but, for some issues, a quick fix is not an option.

“They are assessing the situation to try to figure out exactly what is causing the infrastructure problem. It’s not an immediate fix,” Williams told Fox News. She also says the city does not condone spreading holiday cheer via potholes.

“We ask," Williams said, "that citizens not put Christmas trees in the potholes.”