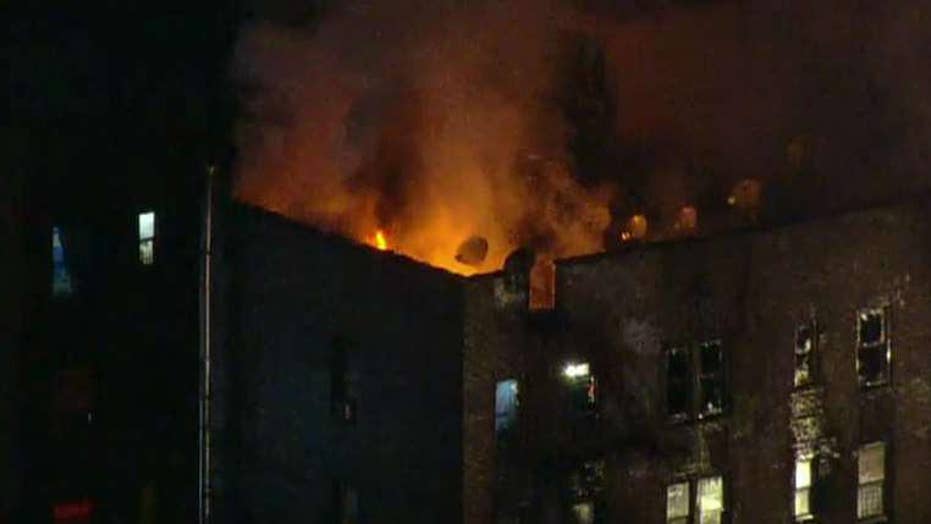 Over 170 firefighters worked for hours to contain the four-alarm blaze in the Bronx.

A child playing with a stove ignited a massive fire Thursday night that killed at least 12 people, including children, at an apartment building in the Bronx borough of New York City, officials said.

Daniel Nigro, the FDNY’s commissioner, told reporters Friday that a 3 1/2-year-old child was fiddling around with a stove on the first floor of the building when the fire broke out around 7 p.m.

The mother of the child left the apartment with her two children, leaving the door open which allowed the blaze to spread quickly, he said.

More than 160 firefighters responded to the four-alarm fire in the Bronx, just a block from the borough's famed zoo. (AP Photo/Frank Franklin II)

Nigro said the incident was the worst loss of life caused by fires in the city, excluding the September 11 terror attacks, since 87 people were killed at a social club fire in the Bronx in 1990.

More than 170 firefighters were on the scene of the four-alarm fire, located at a five-story walk-up apartment house in the Bronx, just a block from the borough's famed zoo, FOX5 New York reported. The firefighters worked to battle the blaze in temperatures as low as 15 degrees.

The New York Times reported a woman, her two daughters and her niece were among the dead. They were identified as Karen Stewart-Francis, 37, and her daughters: Kylie Francis, 2, and Kelly Francis, 7 and her niece Shawntay Young, 19.

Smoke rises from a window of a burned apartment building in the Bronx. (AP Photo/Andres Kudacki)

Stewart-Francis' mother, told the newspaper that 13 family members resided in the apartment building.

“My daughter. My grandchildren. Tell me, what am I going to do?” Ambrozia Stewart said. “Four people I lost.”

The building had no elevator, the Associated Press reported, citing city records. Fire escapes were visible on the facade of the building.

The fire department responded to emergency calls within three minutes.

Witnesses described the scene of the fire and the panic from the building's tenants.

One witness, Xanral Collins, told the New York Post he saw a father running toward the building, but was unable to enter.

"The smoke was crazy, people screaming, 'Get out!" Flicker said. "I heard a woman yelling, 'We're trapped, help!'"

Neighborhood resident Robert Gonzalez, who has a friend who lives in the building, told the Associated Press she got out on a fire escape as another resident fled with five children.

"When I got here, she was crying," Gonzalez said.

Kwabena Mensah, who feared his son, U.S. Army soldier Emmanuel Mensah, was one of the victims of the devastating fire, confirmed his death to PIX11 on Friday.

Mensah's uncle, Twum Bredu, told The New York Times that his nephew "brough four people out. When he went to bring a fifth person out, the fire caught up with him."

New York City Mayor Bill de Blasio, at a news conference Thursday, advised to "hold your families close and keep these families here in the Bronx in your prayers."