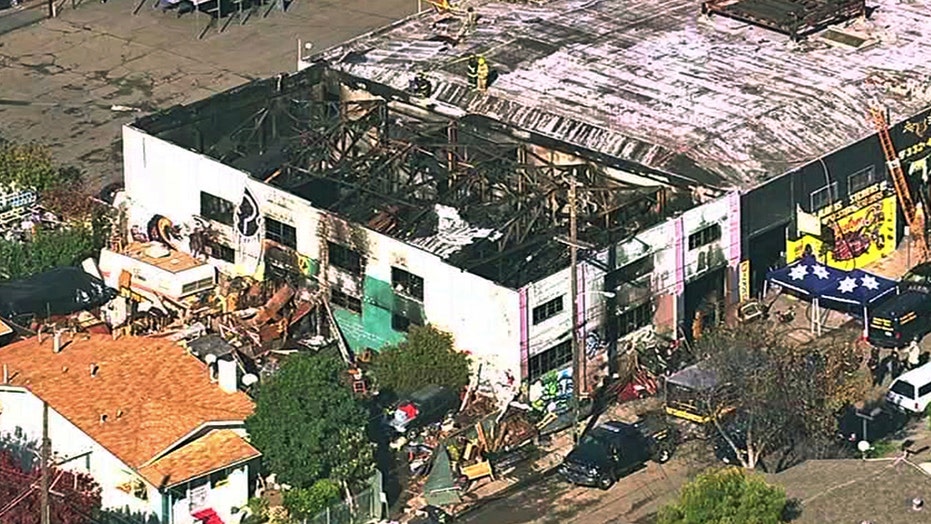 Inspectors launched probe into artist workspace in November, but could not get inside

OAKLAND, Calif. – Terry Ewing was among the anxious family and friends who received confirmation Monday of what he already knew in his heart: His girlfriend was among the three dozen killed in the Oakland warehouse fire.

Authorities confirmed the death of Ara Jo as the death toll rose to 36. Prosecutors also said Monday that murder charges could result from their investigation into the fire that broke out during an underground dance party at a building known as the "Ghost Ship."

Alameda County Sheriff Gregory Ahern told The Associated Press he didn't believe there would be additional bodies found in what is the most lethal building fire in the U.S. in more than a decade.
But he cautioned that it was "impossible to be absolutely positive" until the entire recovery effort is complete. Authorities had gone through about three-quarters of the building by Tuesday afternoon.

The laborious job of digging with shovels and buckets through the debris was suspended overnight because of a dangerously unstable wall. It resumed in the morning, though a rainstorm Tuesday could complicate the effort. The cluttered warehouse had been converted to artists' studios and illegal living spaces, and former denizens said it was a death trap of piled wood, furniture, snaking electrical cords and only two exits.

Alameda County District Attorney Nancy O'Malley said Monday her office has sent a team to search for evidence of a crime in the warehouse, but has not yet determined whether a crime even occurred. She said potential charges could range from involuntary manslaughter to murder. She declined to say who her team has interviewed.

"It's too early to speculate on anything," O'Malley said. "We just started our investigation, and we owe it to the community and those who perished in this fire, and those who survived the fire to be methodical, to be thorough, and to take the amount of time it takes to be able to look at every piece of potential evidence."

Oakland city councilman Noel Gallo, who lives a block from the warehouse, said he confronted the property's manager -- Derick Ion Almena -- several times about neighbors' concerns about trash in the street and in front of the warehouse. Gallo said Almena essentially told authorities to "mind their own business" and appeared resistant to addressing complaints and complying with city codes.

Almena and his partner, Micah Allison, ran the building's arts colony, called the Satya Yuga collective. They were believed to have been away at the time of the blaze.

Relatives, friends and former colleagues said Almena loved to surround himself with followers, but seemed to care little for their well-being.

Asked late Sunday by San Francisco television station KGO about his thoughts on those killed in the fire, Almena said, "They're my children. They're my friends, they're my family, they're my loves, they're my future. What else do I have to say?"

Almena did not respond to emails or calls to phone numbers associated with him by The Associated Press. No one answered a call to a number for Allison.

The warehouse is owned by Chor N. Ng, her daughter Eva Ng told the Los Angeles Times. She said the warehouse was leased as studio space for an art collective and was not being used as a dwelling.

"We are also trying to figure out what's going on like everybody else," the family wrote in a statement to NBC Bay Area. "Our condolences go out to the families and friends of those injured and those who lost their lives."

Eva Ng did not immediately return phone calls from The Associated Press.

Gallo said Chor N. Ng put Almena in charge of cleaning up the Ghost Ship, and nothing was done.

But questions persisted about whether city officials could have done more to prevent the fire. Oakland planning officials opened an investigation last month after repeated complaints about the warehouse. An inspector who went to the premises couldn't get inside, said Darin Ranelletti, of the Oakland Planning Department.
Oakland Mayor Libby Schaaf said city officials are putting together a record of what they knew about the property.

Gallo said the neighborhood was once an industrial zone and that many warehouses and vacant commercial buildings unfit for habitation remain. He said he's concerned that many of them are being used as illegal dwellings given the dearth of affordable housing in the area. He said he will push for the city to hire more fire marshals and building inspectors to investigate.

Authorities have identified 33 of the bodies but withheld most of the names. Those whose identities were not released included a 17-year-old, authorities said.

Investigators said they believe they have located the section of the building where the fire started, but the cause remains unknown.