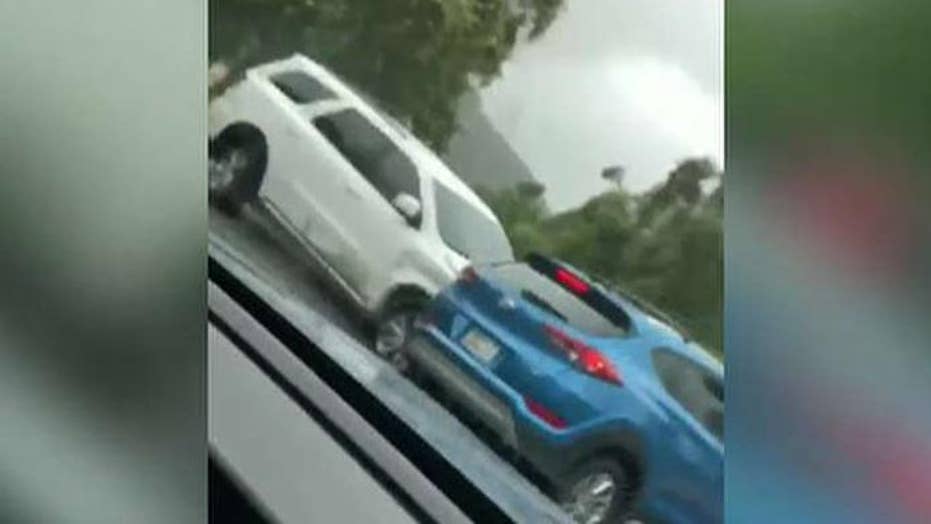 A man driving erratically on a California freeway carjacked one vehicle then tried to carjack another before leading police on a wild chase that was captured on video, authorities said.

The California Highway Patrol told FOX11 it initially received a report of a vehicle driving erratically on the 210 Freeway in Pasadena around 9:15 a.m.

The driver ended up rear-ending an SUV, then stealing it, police said.

“I was just driving my car, someone rear-ended me,” the driver of the white SUV, Carolien Fehmers, told CBSLA. “I pulled up, stopped the car, came out to look at what the damage was and the guy ran right by me, got in my car and took off.”

The suspect then continued driving on the 210 Freeway in the stolen white SUV and attempted to carjack a second vehicle, a Metro Freeway Service Patrol car, before getting back into his car and continuing to flee on the freeway, according to Pasadena News Now.

After exiting off the freeway, police said that the suspect sideswiped several vehicles in Burbank and drove on the wrong side of the road to avoid capture.

"Me and a whole bunch of other cars could see that they were going back and forth, that this white car was just trying to escape any way possible," Price Kelly, whose car was hit by the suspect's vehicle, told ABC7.

The suspect, who has not yet been named by police, tried to run off after crashing, but eventually returned to the vehicle to drive away as an officer was hanging on, police said. Authorities were able to take the suspect into custody after the SUV came to a stop.