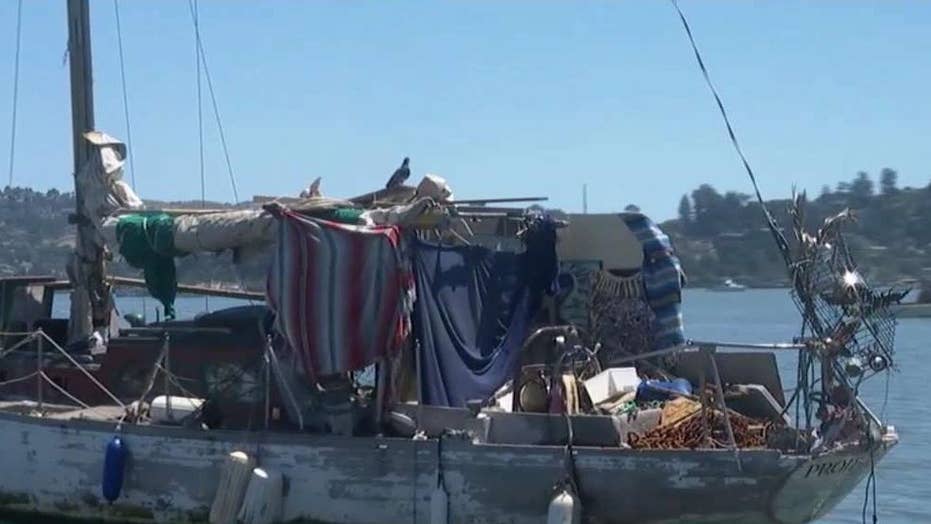 With home prices in the Bay Area nearing seven figures, some who can't afford to live on land are settling down on the water, dropping anchor near cities like Sausalito, and living on Richardson Bay, rent-free.

The number of these so-called "anchor-outs" has doubled in recent years, and today more than 100 people comprise a community some liken to a floating homeless shelter.

But Jimi Mcintosh, a plumber who's lived off the shore of Sausalito for years, says given his finances, he has no other choice.

"It's impossible making what I make, even working full time, to live on land. With deposits, it just gets to be almost $9-thousand (a month), so I can't even afford to move into a studio."

PARENTS CALL COPS ON HOMELESS SON, 56, AFTER HE REFUSES TO LEAVE THEIR RETIREMENT VILLAGE

The problem is squatting on the bay is illegal, and some of the makeshift homes are so cluttered and decrepit, they're barely afloat. Sausalito Police Chief John Rohrbacher took Fox News on a tour of some of the worst offenders--aging vessels stacked with generators, grills, tarps, and all kinds of household items.

"It's a safety issue for responding first responders fire or police if we have to go on board," Rohrbacker said. "But it's also a safety hazard for the people that live on it because they can't get off."

Other dangers include boats that break anchor in storms, flying debris, and the environmental damage caused by dumped trash and human waste, police say.

While some contend anchor-outs add to the color and character of this artsy tourist town, others see an eyesore, and argue it's unfair for law-abiding taxpayers to continually support a community living illegally and off the grid.

Connie Strycker, who owns a waterfront home in the posh city of Belvedere, says anchor outs are often nautically inexperienced.

"They're really coming over with a lethal weapon--a very heavy boat--that smashes into our docks and our decks and causes very expensive damage to our homes," Strycker says.

Covering more than 900 acres, Richardson Bay is managed by regional and state agencies.

It's a complex partnership that means different waters have different rules.

But in Sausalito, a concerted crackdown on anchor-outs has reduced the number of illegal vessels from 90 in 2017 to just over a dozen today. Police admit some liveaboards just sailed somewhere else.

As with any housing crisis, Marin County officials are struggling to come up with a long-term solution.

Ideas include the creation of a "mooring field," where boat owners could anchor their registered boats, to finding space in existing marinas at affordable prices.

For now, Sausalito is giving a pass, more or less, to a handful of so-called "legacy anchor-outs" who've lived on the water for decades, and know how to keep themselves and their boats safe.