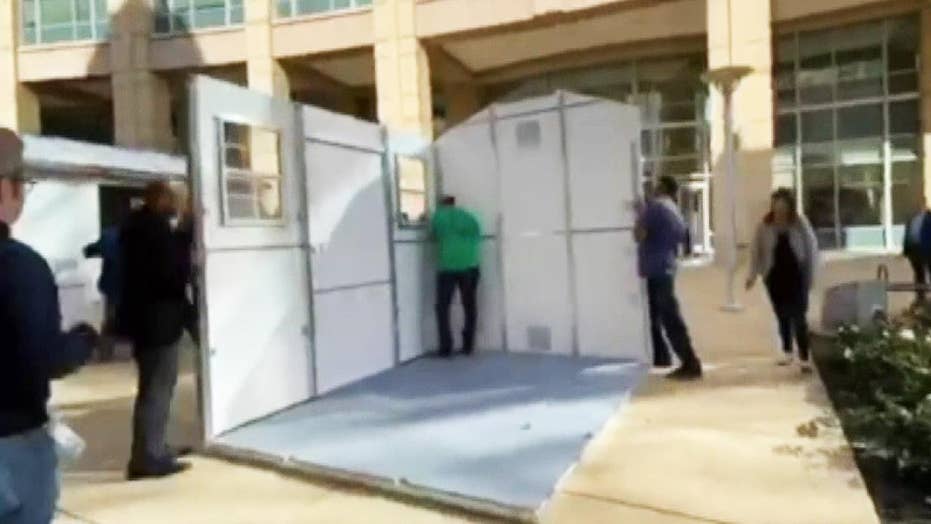 Sacramento leaders seek to battle the rising homeless population with pop-up structures can be assembled without tools in as little as 20 minutes.

As cities across California grapple with a rising homeless population living on the streets, officials in the state capital are considering trying out pop-up structures that could speed up the timeline to getting people into temporary housing.

The Golden State leads the nation in the number of estimated homeless individuals with an estimated total of over 129,972 in January 2018, according to a Department of Housing and Urban Development report. Just over 68 percent of the homeless population in California is also categorized as unsheltered.

In the state capital, Sacramento, more than 5,500 people experience homelessness on any given night, according to county data.

HOMELESSNESS AMONG VETERANS DROPPED SLIGHTLY AS OF JANUARY OF THIS YEAR, WHITE HOUSE SAYS

“District 3 probably has 1,000 people sleeping outdoors tonight, maybe as many as 2,000 in my district,” Sacramento City Councilman Jeff Harris told FOX40 on Tuesday. “It’s a big problem. I would like to house them all but finding sites to do so is difficult.”

Officials in Sacramento are now considering an idea from a Washington state-based group that utilizes small, metal cabins for temporary housing that can fit between four and six beds and range between $4,000 and $7,000.

The structures, which are being used in Dallas and Seattle, would be used to give people a safe place to sleep off the streets.

“For emergency shelter in the winter or when it’s blazing hot outside, we can get people indoors quickly and relatively cheaply,” Harris told FOX40.

Sacramento officials point to the fact that, compared to building a permanent shelter of up to 100 beds that could take several months and millions to build, the temporary ones could spring up much quicker. The idea has gained enough traction that two city council members and the mayor have indicated they are open to the idea, which will be discussed at the next council meeting, according to FOX40.

ATTACKS BY HOMELESS ON RISE IN CALIFORNIA, ADVOCATES SAY LOCAL LEADERS TO BLAME

But those experiencing homelessness raised concerns about the idea, saying that the structures should be bigger.

What can states like California learn from how Texas is handling the homeless?

Homeless advocate Crystal Sanchez told FOX40 she was concerned about privacy and the potential conflict from sleeping in such close quarters.

“Putting people together in a box like that to me just jeopardizes them," she said. "They need their own space."

The spike in homelessness in Sacramento has been too much for some business owners like Elizabeth Novak, who told  "Fox & Friends" earlier this year she had to move her business out of the city after her salon was broken into.

In June, California Gov. Gavin Newsom signed off on a $214.8 billion budget, authorizing $2.4 billion in spending to address the state's housing and homelessness crisis. The budget allocates $650 million to local governments to build shelters, offer rental assistance and convert hotels and motels to temporary or permanent housing.