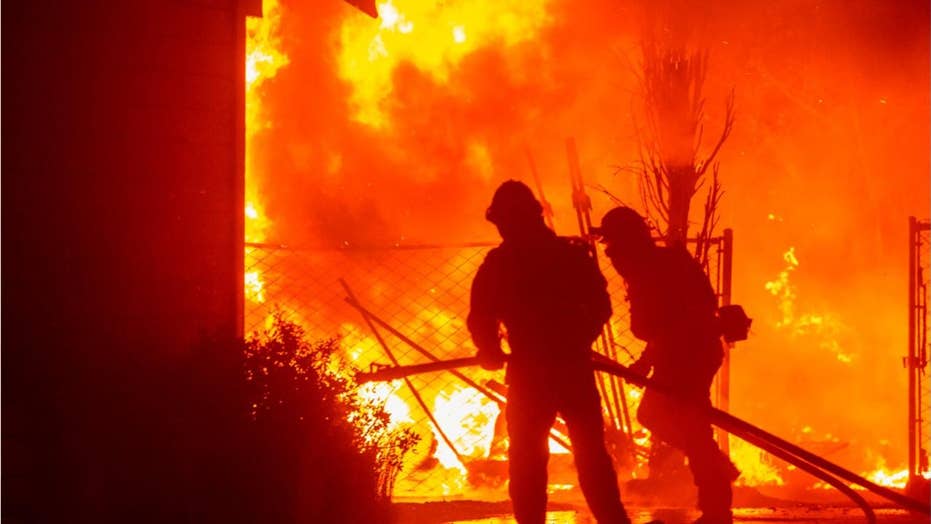 Blackouts and wildfires have Calif. residents drawing up moving plans

Dealing with flames and forced blackouts appears the be the new normal for several homeowners in California. Many are faced with living in the dark for long periods of time or evacuations.

As Californians on Tuesday were forced to once again confront the dual threats of wildfires and forced blackouts, the apparent new normal is proving to be too much for some residents.

The nation's largest utility, Pacific Gas & Electric Corp., will turn off the power for a third time this year to prevent powerful winds from damaging its equipment, which can lead to a blaze igniting. Up to 605,000 customers -- about 1.5 million people -- in 29 Northern California counties will be affected by this latest round of power cuts starting Tuesday. That means people who had the power go out Saturday and were still just getting the lights back on Monday are now faced with the prospect of being in the dark again for several days.

The power cuts come as fire crews continue to battle the Kincade Fire in the state's wine country, a blaze that's destroyed 57 homes and damaged another dozen, with 90,000 homes and other buildings considered threatened. About 156,000 people were under mandatory evacuation orders, while others have taken to shelters due to the power outages.

In this Sunday, Oct. 27, 2019, photo, volunteer Alejandro Pablo carries a newly built cot to an evacuee in need at a Red Cross shelter set up for wildfire evacuees at the Sonoma County Fairgrounds in Santa Rosa, Calif. (John Burgess/The Press Democrat via AP)

George Wiget, who evacuated from his home in Bodega Bay in Sonoma County on Saturday, told KTVU at a shelter in Petaluma on Monday he was angry about the entire situation.

"If I had the money I would move from California tomorrow," he told KTVU. "Tomorrow."

Wiget was particularly incensed about power being cut off in Sonoma County.

"I'm concerned about my refrigerator and freezer. I've got a lot of food in there," he told KTVU. "I'm on a fixed income. How am I going to replace it?"

George Wiget, who evacuated his home in Bodega Bay, Calif. due to wildfire risk and power outages, said he would leave California "tomorrow" if he had enough money to do so. (KTVU)

Another resident of Petaluma, Scotty Richardson, told the Associated Press he was "furious, furious" over the idea more outages, and the ongoing outages "can't be the new normal."

"PG&E can't figure out how to deliver power reliably without killing people," Richardson said. "This is more than three strikes — it's a failure of epic proportions."

A Lafayette police officer stops traffic for a schoolboy at an intersection that has lost power Monday, Oct. 28, 2019, in Lafayette, Calif. (AP Photo/Ben Margot)

The company said last week that a transmission tower may have sparked the Kincade Fire in Sonoma County that forced nearly 200,000 people to evacuate. Power lines owned by PG&E may have started two wildfires over the weekend in the San Francisco Bay Area, even though widespread blackouts were in place to prevent downed lines from sparking in dangerous winds.

The utility told state regulators on Monday the fires matched blazes that destroyed a tennis club and forced evacuations in Lafayette, about 20 miles east of San Francisco. The fires began in locations where power was kept on because they were not designed as high risk.

"They don't seem to know what the hell they're doing," Chris Sherman told the AP about PG&E while at a shelter in Santa Rosa. "I'm not sure that they're really protecting anything."

As the Kindcade Fire swells to twice the size of San Francisco, new video from the ground shows the flames on the frontlines; Claudia Cowan reports from the scene.

The California Public Utilities Commission said Monday it was planning to open a formal investigation into the Public Safety Power Shutoffs within the next month. If regulators find that rules were broken, they can impose fines up to $100,000 per violation per day.

“The state cannot continue to experience PSPS events on the scope and scale Californians have experienced this month, nor should Californians be subject to the poor execution that PG&E in particular has exhibited,” said CPUC President Marybel Batjer said in a statement.

TOM DEL BECCARO: CALIFORNIA, PG&E, WE CAN'T GO ON LIKE THIS. HERE'S WHAT YOU NEED TO UNDERSTAND

In addition to the probe, the commission also plans to review the rules governing blackouts, will look to prevent utilities from charging customers when the power is off and will convene experts to find grid improvements that might lessen blackouts during next year's fire season.

In this Sunday, Oct. 27, 2019, photo, Jim Keefauver rests at a Red Cross shelter set up for wildfire evacuees at the Sonoma County Fairgrounds in Santa Rosa, Calif., after evacuating his Santa Rosa home in the morning. (John Burgess/The Press Democrat via AP)

In the city of Fremont, residents in the Niles Canyon Mobile Home Park said Monday the idea of having no power for another stretch of days was a cause of concern.

"I'm not supposed to be under stress, but it's stressful and for other people, probably more so," 93-year-old Teresa Innerbickler, who requires an oxygen tank to breathe, told KGO-TV on Monday. "I'm usually pretty calm, but this is just too much and it shouldn't be."

The destructive Kincade Fire's erratic conditions have caused evacuation orders to be downgraded to warnings for some 30,000 people in the west on Monday but new warnings were issued to people in the east, with Calistoga in Napa County and Middletown in Lake County — a community badly damaged by a 2015 wildfire.

Uncertain conditions and evacuation orders have caused places like the Petaluma Community Center to fill to capacity. All 350 cots were being used on Monday.

"Petaluma is having a lot of folks and we are at capacity all over," shelter manager Drew Halter told KTVU.

With no rain in the forecast this week, the prospect of dangerous fire conditions combined with ongoing blackouts had some Northern California residents questioning if it was worth it to stay through to the next fire season.