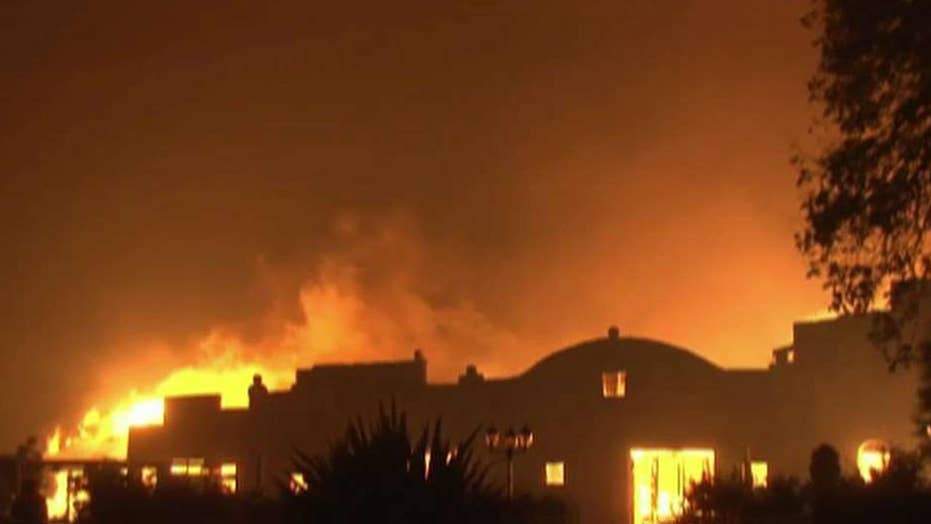 180,000 people have been ordered to evacuate in Northern CA amid the wind-fueled Kincade fires; Dan Springer with the latest.

California Gov. Gavin Newsom on Sunday declared a statewide emergency after multiple wildfires throughout the state prompted the evacuation of nearly 200,000 people from their homes.

Newsom said in a statement that officials were deploying "every resource available" to respond to the wildfires, including a large blaze in Northern California powered by 75-mph wind gusts.

In the Bay Area, two grass fires shut down a stretch of Interstate 80, including a bridge between the cities of Crockett and Vallejo. Fire officials said an ember from one fire possibly sparked the other. In the south, a wildfire in the Santa Clarita area near Los Angeles destroyed 18 structures.

The biggest evacuation was in Northern California's Sonoma County where 180,000 people were told to pack up and leave. Meanwhile, Pacific Gas & Electric (PG&E) shut off power to 2.3 million people across 36 counties starting Saturday evening.

State officials, fearing that the winds could blow embers and spread fire across a major highway, expanded evacuation orders that covered parts of Santa Rosa, a city of 175,000 that a wildfire had devastated two years ago.

Sonoma County Sheriff Mark Essick urged people in the evacuation zone to get out immediately, citing the 24 people killed as the fire swept through the region two years ago.

The Kincade Fire, which began Wednesday night and has burned 47 square miles and has destroyed 79 structures, was only 10 percent contained Sunday morning, the California Department of Forestry and Fire Protection said.

Strong winds hit Sunday as gusts reached 93 mph in the hills north of Healdsburg and topped more than 80 mph in many other areas, according to the National Weather Service.

Nine people were injured after heavy winds toppled a 30-foot tree at a farmers' market in the city of Martinez. Six were taken to a hospital but the injuries were not life-threatening, police said.

The windy conditions were expected to continue through Monday. Fire officials said they feared that if the Kincade Fire crossed U.S. 101, it could ignite an area that hasn't burned in 80 years.

About 200 people were evacuated from California State University Maritime Academy in Vallejo, 55 miles south of Geyserville where the massive Kincade Fire has been burning.

To the south, a wildfire dubbed the Tick Fire destroyed 18 structures Thursday in an area north of Los Angeles. Nearly all the 50,000 residents ordered to evacuate were allowed back home after Santa Ana winds eased. As of Sunday, the Tick Fire was 65 percent contained.

PG&E said this weekend's shut-off was affecting about 940,000 homes and businesses. The city of San Francisco was not in line for a blackout amid shut-offs for most of the rest of the San Francisco Bay Area, the wine country and the Sierra foothills.