A transgender woman serving two years in a juvenile facility for molesting a 10-year-old girl in a case that sparked massive criticism of Los Angeles County's top prosecutor has been charged in connection with a 2019 robbery.

Hannah Tubbs, 26, is being held in the Kern County jail on a $1 million bond for second-degree robbery and is slated to appear in court Tuesday, according to jail records. She is being held under her previous name, James Edward Tubbs.

Tubbs became the center of controversy earlier this year when she pleaded guilty in connection with a 2014 assault on a young girl inside a Denny's restaurant bathroom when she was just weeks from turning 18. Prosecutors said Tubbs grabbed the girl by the throat, locked her in a stall, and put her hand down the girl’s pants.

Tubbs was arrested eight years after the crime, after she began identifying as a woman, and was eventually given the lenient sentence as part of a plea deal. The case sparked criticism after it remained in juvenile court as part of District Attorney George Gascon's directive that minor offenders not be tried as adults.

Because of the move, Judge Mario Barrera, who said his hands were tied, was limited on the sentence he could impose. Following the Tubbs sentence, Los Angeles County Supervisor Kathryn Barger called the outcome "unsatisfactory."

"Judge Barrera’s hands were tied today – due to the fact that the DA’s office failed to file a motion to transfer Tubbs to adult criminal court, which is where she rightly belongs," Barger said. "Instead, we’re left with a 26-year-old individual sentenced to two years in a juvenile facility in isolation, separated by sight and sound from the other juveniles."

Tubbs was later caught on a jailhouse phone call gloating about the case and bragging that she wouldn't have to register as a sex offender. In a statement after the recordings were leaked, Gascon said he wasn't previously aware of the remarks.

"After her sentencing in our case, I became aware of extremely troubling statements she made about her case, the resolution of it and the young girl that she harmed," he said. "If we knew about her disregard for the harm she caused we would have handled this case differently."

A spokesman for Gascon's office told Fox News that Los Angeles officials will be notified if Tubbs is released from custody in Kern County.

"District Attorney George Gascón is committed to protecting the public and especially our children. In this case, Hannah Tubbs continues to serve her Los Angeles County sentence, while being prosecuted on an unrelated robbery charge in Kern County," Ricardo Santiago, a public information officer for the DAs office said. "Her transfer was based on a 2019 warrant and approved by a court." 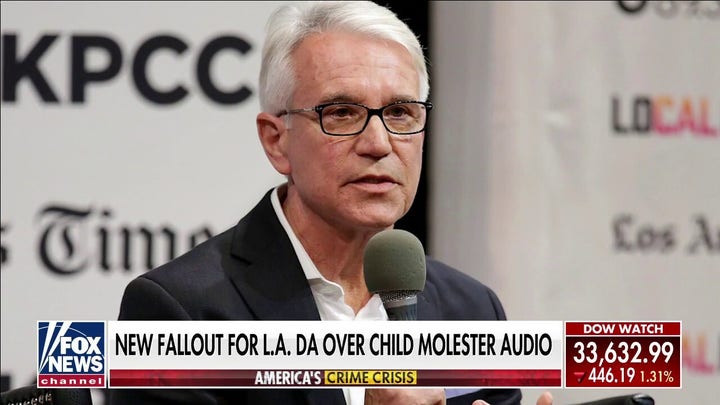 Tubbs was also accused of sexually molesting a four-year-old girl in August 2013 in a Bakersfield, California library as the child's mother was browsing for books a few aisles over.

Gascon's policies have quickly come under scrutiny by crime victims, elected officials and his own prosecutors. Shea Sanna, the prosecutor originally assigned to the Tubbs case before he was removed, told Fox News that Tubbs could be freed as soon as mid-June.

He said a progress report in April showed the Tubbs had been involved in around 60 negative incidents and was not cooperating with a required rehabilitation program. He said he believes Tubbs is "gaming the system."

"Very rarely is Tubbs in compliance with anything," Sanna said. "The Gascon administration is like a second defense attorney. There's two defense attorneys in the room right now and there's nobody representing the victim and public safety."

Victims are sometimes outraged when they find out about Gascon's directives, said Sanna, who said he was removed from the case in an attempt to silence him.

"They are so outraged and hurt. It's embarrassing that I have to tell them that this is the position of the office," he said. "And now we have an extremely violent, dangerous, unremorseful child predator on the verge of being released and my boss does not care."