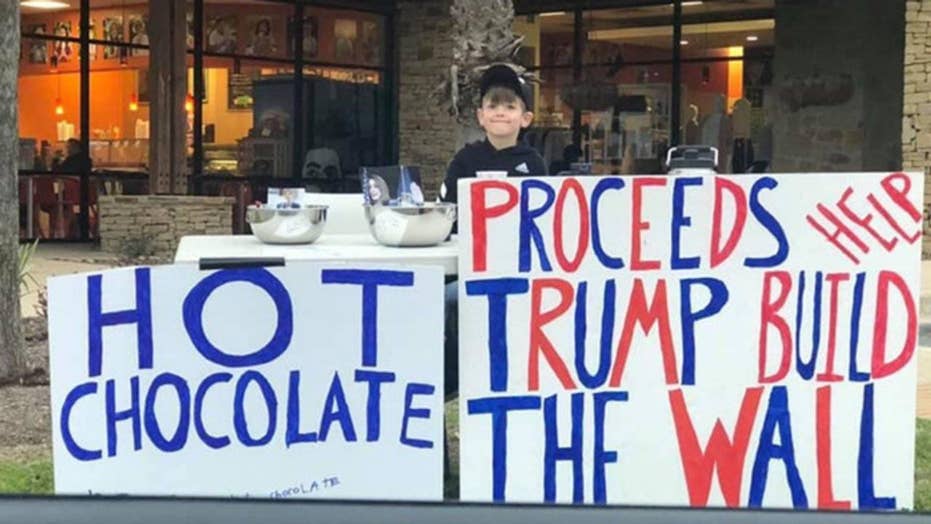 A seven-year-old boy was harassed and called "Little Hitler" after setting up a hot chocolate stand to raise money for President Trump's border wall, his parents say.

Benton Stevens, of Austin, Texas was reportedly motivated to help fund the border wall between the United States and Mexico after watching Trump's State of the Union on February 5 with his parents Jennifer and Shane, who are both active members with the Republican National Committee, KXAN reports.

Between his hot chocolate stand, a matching donor and Venmo receipts, Benton has raised close to $5,000 - but his parents say it was at the cost of his privacy after videos and photos of their son were posted to Facebook

“People think he’s brainwashed,” his mother, Jennifer, said. “Well, of course, he supports Trump because we do, and he hears how we talk and this and that. Call that brainwashing, but I call it parenting, because we instill our values in him.”

Benton set up his stand on Saturday at a strip mall northeast of Austin with the help of his brothers and parents, who made signs and brewed hot chocolate with him. Within an hour, his parents say, he made about $231 - but was forced to shut down after patrons complained to the store owner Benton had placed his stand in front of.

“I guess some liberals – or whatever you want to call them – they were griping at the owner (of the store) and going in and yelling at him and slamming him on Facebook,” Jennifer said.

Benton, however, wasn't deterred, and was actually fired up by the responses he got from the public. He decided to set up his stand again on Sunday, and again, received criticism in person and online.

“He was called a little Hitler yesterday,” his mother said. “A guy pointed at him in his car and then he said that we didn’t like brown people. I don’t understand that at all.”

Despite the blowback, the Stevens family has promised that the money they raised will go directly to the wall.

TEXAS DAD SPINS GUN WITH FINGER AT DAUGHTER'S BIRTHDAY, ACCIDENTALLY SHOOTS HIMSELF IN THE STOMACH

“There’s a GoFundMe page and we’re also part of the RNC and we’re pretty connected there so we will 100 percent make sure it goes towards the wall," they said.

GoFundMe donations can be funneled to the Trump administration through a category called "Gifts to the United States" for "general use by the federal government," but donating to specific government projects is a much more complicated and unclear process, according to Business Insider.

In light of all the publicity surrounding Benton's border wall fundraiser, his father told Fox News that it's actually inspired some reconciliation across party lines in their Texas town.

"People who were originally very mean have started apologizing for what they said and sticking up for Benton," Shane said.

"He is close to $5,000 raised now and is thinking about doing a free hot chocolate stand for people from both sides of the debate since there are so many from both sides sticking up for him."