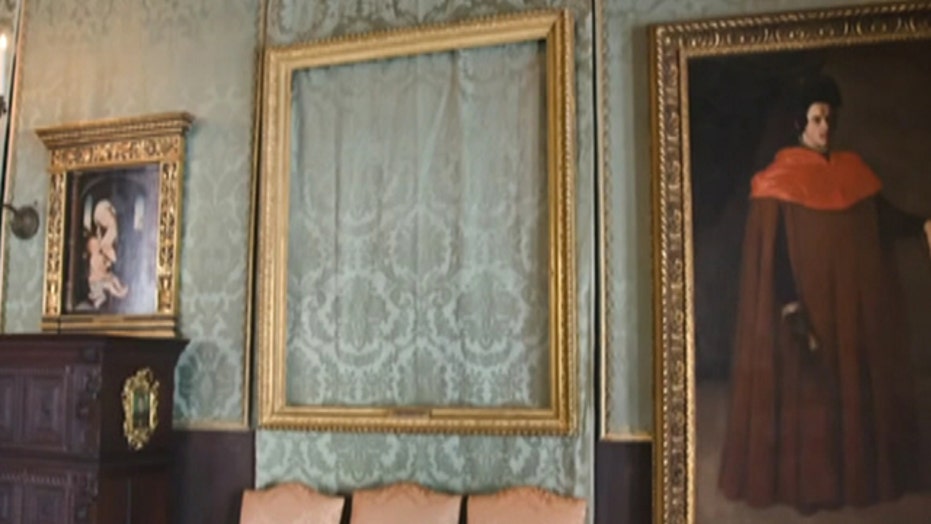 25 years later, empty frames are on the walls of the Isabella Stewart Gardner Museum in Boston where paintings by Rembrandt and Vermeer once hung

BOSTON – It's been called the biggest art heist in U.S. history, perhaps the biggest in the world. But 25 years later, the theft of 13 works from Boston's Isabella Stewart Gardner Museum remains unsolved.

The theft has spawned books, rumors and speculation about who was responsible -- and multiple dead ends.

Yet authorities and museum officials remain hopeful, noting that stolen art almost always gets returned -- it just sometimes takes a generation or so.

"Although a quarter-century has passed since the art was stolen, we have always been determined to recover it and we remain optimistic that we will," said Anne Hawley, the Gardner's director, who was in charge at the time of the theft.

In the early hours of March 18, 1990, two men disguised as Boston police officers talked their way into the museum by saying they were responding to a call. They overpowered two security guards, bound them with duct tape and spent 81 minutes taking 13 works of art, including masterpieces by Rembrandt, Vermeer, Degas and Manet.

Authorities say the artwork is worth perhaps as much as a half-billion dollars. Museum officials say it's priceless because it cannot be replaced.

Some of the works, including Rembrandt's "Storm on the Sea of Galilee," were cut from their frames. Those frames hang empty in the museum to this day. "It is our way of remaining hopeful," museum marketing director Kathy Sharpless said.

Museum officials and police remain baffled by the selection of works stolen. It is thought that the three stolen Rembrandts were targeted, but why more valuable pieces were left behind while less valuable works were taken remains a mystery.

The FBI announced two years ago that they think they know the identities of the thieves, yet the exact whereabouts of the art remains unclear. No names have been disclosed or arrests made.

With the help of foreign law enforcement agencies, the FBI has chased down thousands of leads around the globe, to France, Spain, Britain and Japan. But the answer may be closer to home.

Richard DesLauriers, former agent in charge of the FBI's Boston office, said two years ago that investigators believe the thieves belonged to a criminal organization based in New England and the mid-Atlantic. They believe the art was taken to Connecticut and Pennsylvania in the years after the theft and offered for sale in Philadelphia. After that, the trail went cold.

"That announcement did generate some good tips but no recovery," said Geoff Kelly, a member of the FBI's art crime team who has worked on the case for more than 12 years. The local angle remains the most hopeful, he said.

In 2012, the FBI fruitlessly searched the property of a Connecticut mobster they believe knew something about the heist, even using ground-penetrating radar.

The museum is offering a $5 million reward for the return of the artwork "in good condition." Art experts have said that for that kind of money, someone will eventually rat out the thief.

The government's reward is not monetary: It is offering immunity.
------
THE ANNIVERSARY
The museum is marking the infamous anniversary by launching a virtual tour on its website titled "Thirteen Works: Explore the Gardner's Stolen Art." The tour includes high-resolution images of the artwork, archival images, the history of the works and how they were acquired by Isabella Stewart Gardner.
Anthony Amore, the Gardner's security chief, is scheduled to deliver a lecture called "81 Minutes," where he will walk the audience through the theft.
Wednesday's lecture is open only to museum members, but his March 26 lecture is open to the public.