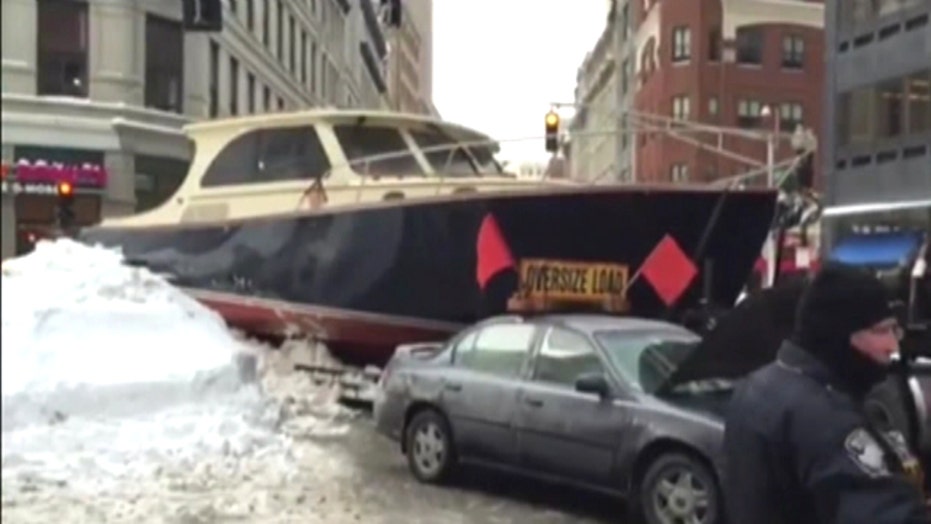 Raw video: Truck carrying the 43-foot Maggie Mae to the New England Boat Show gets stuck in a snowbank in downtown Boston

The city of Boston, which has already been buried under a historic amount of snow, is bracing for yet another 'significant' storm, expected to strike Saturday, that could dump an additional 12-14 inches of snow in the area.

Boston Mayor Marty Walsh said the snow is expected to continue into Sunday and that the city is already taking steps to remove large mounds of snow in preparation for the storm. The city has employed snow farms, high-power snow melters and will enforce a parking ban once the weekend storm begins.

"I know people are frustrated with the snow, but the snow is not stopping," Walsh said at a Thursday afternoon press conference. "This is unprecedented territory."

He said the city has paid about $32 million for snow removal and that price tag is increasing. He also recommended that the Massachusetts Department of Transportation shut down into Monday if hit with another foot of snow.

MyFoxBoston.com reported that the storm will likely consist of bands of heavy snow that will continue well into Sunday. The area may see blizzard conditions and officials warned of coastal flooding.

The snowfall numbers in the area are staggering. Boston's Logan Airport measured 72 inches of snow in the last two and a half weeks. Earlier this week, the town of Norwell, which is outside Boston, got buried in 30 inches of snow.

The city has received snow-melting machines from New York and other heavy equipment from other states. Gov. Charlie Baker activated hundreds of National Guardsmen to help with the snow removal from the last storm.

Besides the snow, the Massachusetts Emergency Management Agency said the area may potentially see record-low temperatures and wind chills later in the week.

"No matter what it's going to be, it will be a significant impact between the snow and winds and the bitter cold on Sunday into Monday," Alan Dunham, a National Weather Service meteorologist, told Bloomberg. "People should be getting out there and getting those roofs cleared this afternoon."

Walsh told residents to keep a keen eye on neighbors who may be distressed and alert authorities if they see any homeless.  He also asked residents to support local businesses that may have been hurt by the recent storms.

"It's just been painful," Daryl Levy, the owner of Deluxe Town Diner in Watertown, told FoxNews.com. "It's painful for the customers, the businesses and the vendors….it affects everyone."

The diner was forced to close twice in the past two weeks and has been operating on an adjusted schedule.

"It's something we're going to have to get through," she said.