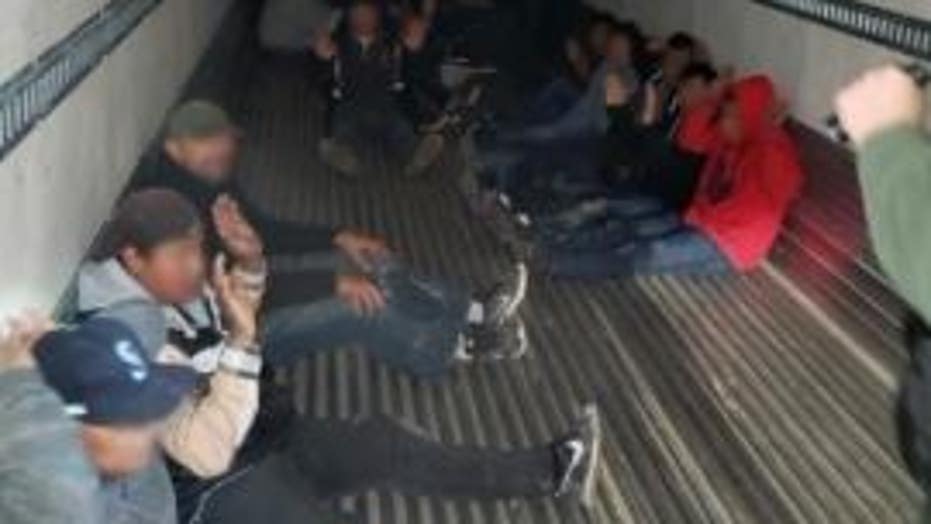 Border Patrol agents arrested a man Wednesday after discovering 26 illegal immigrants hiding inside a tractor-trailer that was crossing into California at the U.S.-Mexico border, officials said.

Agents assigned to the El Centro Sector checkpoint on Highway 86 discovered the immigrants around 9:40 p.m. while conducting an immigration check on the 32-year-old driver, U.S. Customs and Border Protection (CBP) said in a news release.

A Border Patrol canine alerted agents to the rear cargo of the tractor-trailer. The agents said they inspected the area and found 26 people inside.

Chief Patrol Agent Gloria I. Chavez said the immigrants had no safety restraints and were locked inside in below 45-degree weather.

Teenagers were among the group. Border Patrol Agent Carlos Pitones told the Los Angeles Times that the immigrants’ ages ranged from 16 to 56.

The driver presented agents with a California driver’s license as his own, but it was later determined to be fraudulent. The agents then determined that the driver was a Mexican national in the U.S. illegally, according to CBP.

The driver and all 26 of the smuggled immigrants were arrested.

“This smuggling operation had no regard for the safety of the people they were smuggling,” Chavez said. “Fortunately, our agents were able to remove them from that potentially life-threatening situation.”

Pitones told the Times that the immigrants will be processed “in a case-by-case basis.”