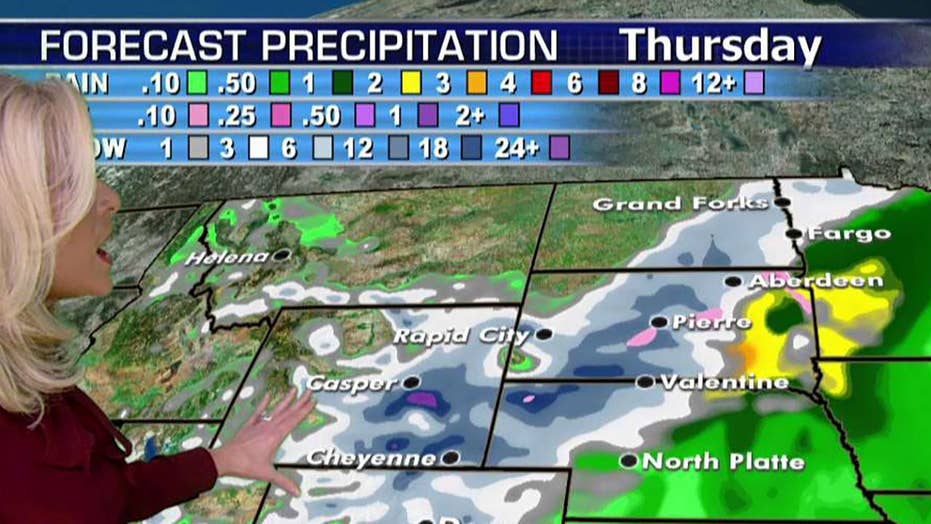 A late-season storm system is forecast to explode over the central U.S. on Wednesday, becoming a "bomb cyclone" as it slams the region with blizzard conditions, heavy rains and fierce winds that threaten to snarl travel for tens of millions.

The National Weather Service said the "highly impactful winter storm" will intensify over the Central Rockies before pushing eastward through the Central Plains. The storm is expected to reach the criteria of a "bomb cyclone" because it's going to strengthen by dropping 24 millibars in 24 hours, according to Fox News Senior Meteorologist Janice Dean.

A millibar is the measurement of atmospheric pressure, according to the National Oceanic and Atmospheric Administration.

WHAT IS A 'BOMB CYCLONE'?

“This can happen when a cold air mass collides with a warm air mass, such as air over warm ocean waters,” the National Ocean Service explains on its website. “The formation of this rapidly strengthening weather system is a process called ‘bombogenesis,’ which creates what is known as a bomb cyclone.” The same type of strengthening can happen to a storm that's over land, like the system on Wednesday.

The "bomb cyclone" is expected to bring heavy snow to the Rockies, high winds, and the threat of severe weather. (Fox News)

The storm on Wednesday is expected to bring up to 18 inches of snow in parts of Colorado and Wyoming, and possibly one of the strongest storms that Kansas has experienced, according to Dean.

Blizzard warnings stretch from the Denver area all the way north through Nebraska, Wyoming into the Dakotas and northern Minnesota. There is also the threat of flash flooding across the Upper Midwest, according to Dean.

Besides the heavy snows, the intensifying storm is going to bring hurricane-force winds blowing snow around, and very high winds up to 75-mph along the southern side of the storm.

"Very high winds will also affect large portions of the Southern to Central High Plains where high wind warnings have been issued by the National Weather Service offices across these areas," the NWS' Weather Prediction Center said. Sustained wind speeds of 30 to 40 mph with gusts over 60 mph are expected across most of New Mexico, western Texas, central to western Oklahoma, in addition to parts of Kansas and southeast Colorado.

"This is potentially a dangerous wind event," the NWS' Midland office said. "This will be one of the strongest wind events in years for West Texas and Southeast New Mexico."

The severe weather threat from the "bomb cyclone" (Fox News)

The threat of severe weather remained on the eastern side of the storm, stretching from Texas into the Mississippi Valley for locations such as Little Rock and Memphis.

LIGHTNING LIGHTS UP SKIES OF SOUTHERN CALIFORNIA, WITH AROUND 1,500 PULSES REPORTED IN 5 MINUTES

All major metro Denver districts have already canceled school for Wednesday, and Denver International Airport announced that over 900 flights have been canceled due to the storm, FOX31 reported.

The onslaught of additional snow comes as Colorado is dealing with the continuing threat of avalanches this winter.

An avalanche injured a sheriff and his daughters Tuesday when it smashed into their home in rural Colorado. Hinsdale County Sheriff Justin Casey was with his two teenage daughters in their home, nestled in the San Juan Mountains, when the slide hit.

Casey managed to call for help, and about 15 rescuers found the family within an hour. Casey and one of his daughters were treated for minor injuries.

"The house is destroyed. Completely destroyed," Sandy Hines, an administrative assistant for the county, told the Associated Press.

About 15 homes near Casey's property were evacuated as a precaution. Other residents in the area were warned of the possibility of additional avalanches.

"This is all unprecedented," said Hines, who has lived in the area for 25 years.