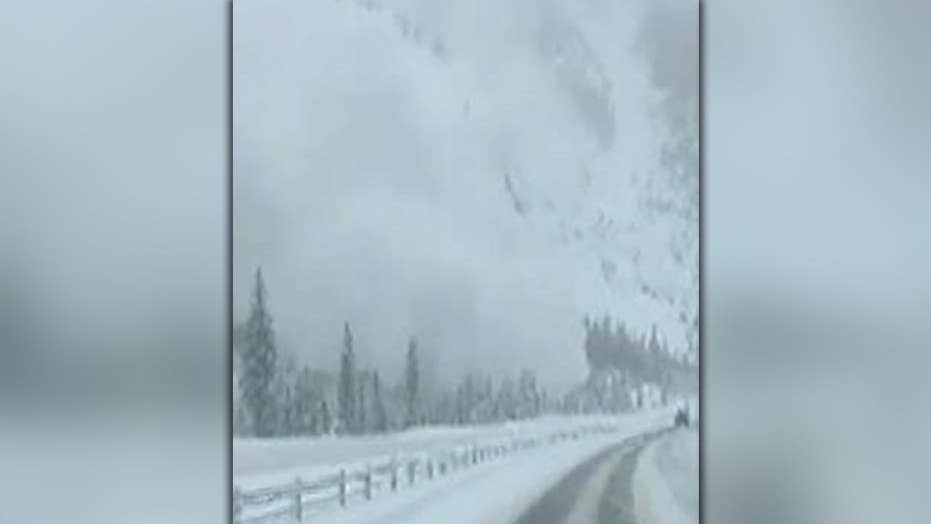 A motorist on a highway in Colorado had a close call with a wall of snow and debris after an avalanche roared down a canyon Sunday near a major interstate, sending a plume of white powder across the roadway.

Jacob Easton was traveling through Ten Mile Canyon on Interstate 70 near Breckenridge when he captured the avalanche roaring down the mountain.

"All of a sudden, me and my dad just saw a big white cloud to the left of us and we instantly noticed the avalanche," he told FOX31.

AT LEAST 23 DEAD IN DEVASTATING ALABAMA TORNADO, DAMAGE IS 'UNBELIEVABLE'

In the video, Easton can be seen pulling the car over and waiting as the snow crashed down the mountain in front of him next to the interstate. His windshield was covered with snow, with visibility temporarily reduced to zero until the barrage of whiteness settled.

An avalanche barreled through Ten Mile Canyon between Frisco and Copper Mountain along Interstate 70 on Sunday. (Colorado Avalanche Information Center)

Another video posted to Twitter by the Colorado Avalanche Information Center showed the avalanche from a different angle.

"Avalanche debris collected in Tenmile Creek which is underneath the avalanche path and away from the highway," the agency said.

AT LEAST 23 DEAD, MANY INJURED, IN APPARENT LARGE TORNADO IN ALABAMA, OFFICIALS SAY; FATALITIES COULD RISE

The Colorado Department of Transportation said not enough snow made it onto I-70 to impact drivers.

"It was not a controlled slide," a CDOT spokesperson told FOX31. "It was a natural avalanche."

The avalanche was one of several reported in Colorado over the weekend following heavy snow. In Vail and Summit Counties, where Frisco is located, the CAIC said an avalanche warning was in effect through Monday morning "due to large amounts of snowfall and strong westerly winds."

A second slide in Frisco on Sunday ended up closing the roadway for three hours, FOX31 reported.

Video from another motorist shows the moment the second avalanche buried parts of the interstate.

The Colorado State Patrol told FOX31 that no one was injured in that incident, and no cars ended up trapped.