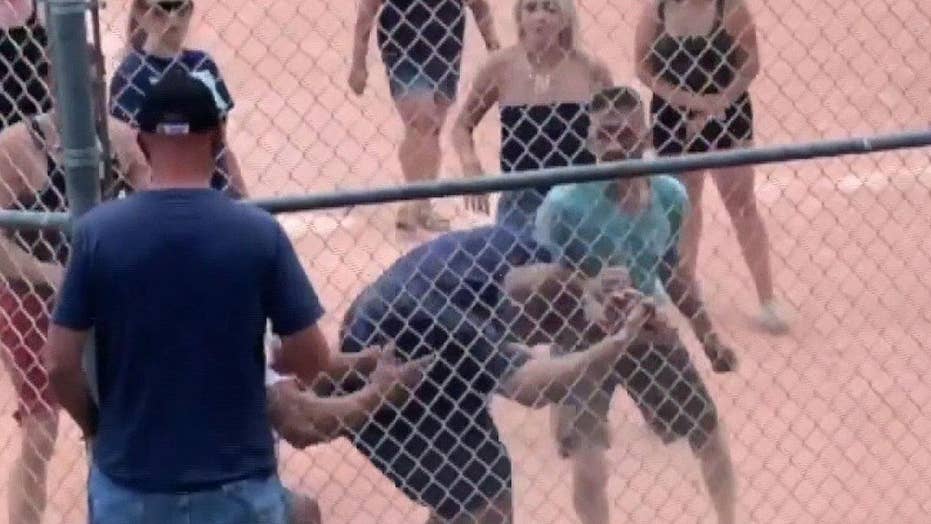 Lakewood, Colorado police investigate cause of fight at baseball game for 7-year-olds.

There was plenty of slugging Saturday during a Lakewood, Colorado youth baseball game -- but, luckily, none of it involved bats.

Roughly a dozen irate parents took their frustrations with the game out on each other, culminating in an all-out brawl on the diamond while their stunned 7-year-old children looked on, video of the incident shows.

The incident occurred shortly before Noon on Saturday on a baseball field at the Denver-area Westgate Elementary School, the Lakewood Police Department said on Facebook.

"I think the saddest part in all of this is we're talking about a 7-year-old baseball game," police spokesman John Romero told FOX31. "I think it's the parents who have to grow up."

Police said coaches and parents who were "unhappy with a baseball game" -- played by the 7-year-olds and officiated by a 13-year-old umpire -- "took over the field" and began assaulting each other.

The brawl broke out on the baseball fields at Westgate Elementary School, located just outside Denver. (Lakewood Police Department)

Several injuries were reported during the melee, including one person with a "serious bodily injury," according to police.

Video released by police shows the parents taking the field for the fracas, throwing punches as other children watch.

"It's disgusting," Romero told FOX31. "I highly doubt that the Rockies had any scouts there during the game,"

An investigation by Lakewood Police led to four people being cited, but authorities are looking for additional information on the brawl.

"I highly doubt that the Rockies had any scouts there during the game."

In particular, cops are trying to identify a person who was seen in a white shirt and teal shorts in the video.

More arrests are likely, according to police.

Shannon Hartmann, who officiates high school sports in the area, told FOX31 after watching the video that he'd never seen anything like it.

"Kids look up to you, my kid does," he said. "If you don`t lead by example what do you expect the future to be?"