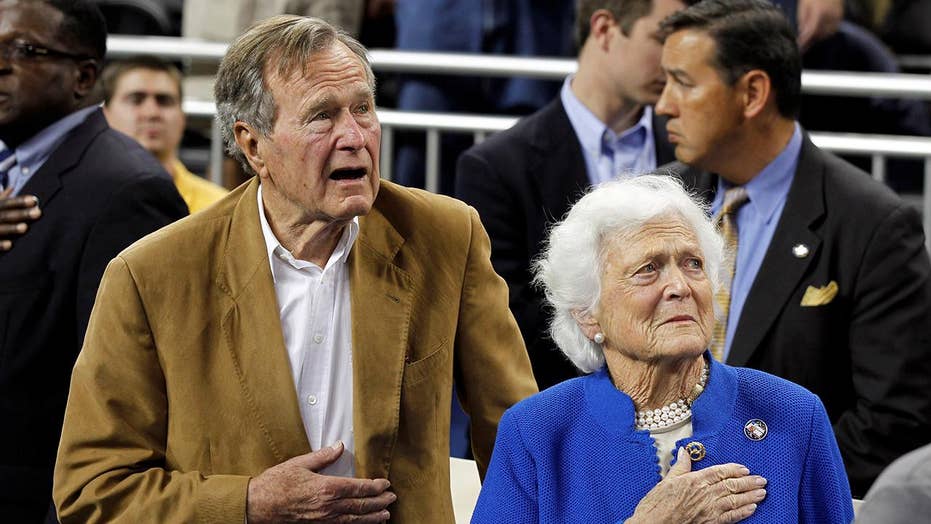 Dana Perino reflects on life and legacy of former first lady Barbara Bush, remembering her sense of grace and the fact she wanted her children and grandchildren to appreciate volunteer work and public service. #Tucker

With the news of Barbara Bush’s passing on Tuesday, lawmakers and officials from around the world shared fond words about the former first lady.

Bush, described as “a relentless proponent of family literacy,” died at the age of 92, a spokesman for the family confirmed.

Read on to see what others had to say about the former first lady:

President Trump tweeted he and first lady Melania Trump “join the Nation in celebrating the life of Barbara Bush.” He went on to describe her as “an advocate of the American family” and said she would “be remembered for her strong devotion to country and family, both of which she served unfailingly well.”

A tweeted statement from Vice President Mike Pence said, "Bush was a woman of unique strength and grace whose devotion to her family was an inspiration to every American."

Former President Barack Obama and Mrs. Obama shared a statement on Twitter, calling Bush "the rock of a family dedicated to public service."

"There was no one else quite like Barbara Bush," former Vice President Joe Biden tweeted.

A statement released by former Vice President Dick Cheney read, "Barbara Bush will forever be remembered as she lived, a courageous woman who dispensed wit in equal measure with gestures of kindness."

"As First Lady, she was a selfless servant to our country and a powerful advocate for literacy," the statement continued. "She championed courage and a sense of self-worth that was rivaled only by her life-long devotion to George H.W. Bush. Lynn and I were blessed to know Barbara and we join the entire nation in offering our prayers to the Bush family."

Former President Bill Clinton tweeted that Bush was “a remarkable woman” who “showed us what an honest, vibrant, full life looks like.” He said he and Hillary "mourn her passing and bless her memory."

Former Vice President Al Gore said Bush was "a pillar of strength for her family and was much admired in our country."

"Barbara Bush was a great lady and a dear friend," John H. Sununu, former New Hampshire governor and Chief of Staff for H.W. Bush, tweeted. "Her passing is a terrible loss for the Bush family, the Sununu family and for all America."

Former President Jimmy Carter and his wife Rosalynn said in a statement that Bush "touched the hearts of millions with her warmth, generosity, and keen wit."

Republican Speaker of the House Paul Ryan offered his condolences to the Bush family and said “May she rest in eternal peace.”

Senate Minority Leader Chuck Schumer in a tweet said Bush "personified grace and class as First Lady and throughout her life."

Senate Majority Leader Mitch McConnell said the country "joins the Bush family, their many friends, and all the country in their grief, and in prayer."

"Tonight is a sad night for America," House Minority Leader Nancy Pelosi tweeted. "First Lady Barbara Bush will be remembered for the dignity, civility & spirit she brought to every thing she did."

Sen. Dianne Feinstein, D-Calif., in a tweet about Bush said she'll "miss her wit and candor."

"One of the greatest First Ladies in the history of our nation has gone to her Heavenly reward," South Carolina Sen. Lindsey Graham tweeted.

Texas Gov. Greg Abbott in a statement asked "that all Texans join us in keeping" the Bush family "in their thoughts and prayers as they mourn the passing of a devoted wife, mother, and public servant."

Alabama Gov. Kay Ivey in a statement said Bush's "life is a shining example of how strong women can serve their country & help improve the lives of all Americans."

Sen. John McCain, R-Ariz., in a statement said, "Barbara remains an example to all of us of kindness and patriotism, and will fondly be remembered for her courage, grit and intense loyalty to those she loved and cared for."

Utah Senate candidate and former Massachusetts Governor Mitt Romney said Bush was “the great First Lady of our times” and he and his wife “will profoundly miss her friendship, her compassion, & the twinkle of her eye.”

Former Secretary of State Madeleine Albright tweeted that Bush “was a woman of incredible determination, wit, and compassion who embodied America’s best values.”

Canadian Prime Minister Justin Trudeau tweeted that Bush leaves behind “a legacy of dignity, grace, service and devotion to family.”

"From her scrappy demeanor and no-frills style to her boundless passion for family literacy and freedom, Barbara Bush was America at its best," former Speaker of the House John Boehner tweeted.

The Barbara Bush Foundation for Family Literacy tweeted, "We mourn the passing of Barbara Bush, who believed that the world would be a better place if more people could read, write and comprehend."

The daughters of former President Nixon shared a statement via the Nixon Foundation on the bond between their mother and Bush, "who shared a special commitment in how they embraced the role of First Lady."

James A. Baker, III, former Secretary of State and White House Chief of Staff, shared a statement via the Baker Institute saying, "As only one of two women in American history who can be called First Lady and First Mother, she was matriarch of a family that remains as dedicated to public service as it was to politics."

"Barbara Bush's memory lives on through the love of her family," Republican National Committee Chairwoman Ronna McDaniel said in a statement. "We at the RNC are praying for peace and blessing for the entire Bush family."

Democratic National Committee Chair Tom Perez in a statement said, "With the passing of Barbara Bush, America has lost a tireless public servant. From championing literacy to promoting awareness and distigmatization of AIDS, the former first lady put the values of inclusion and equality into action, and there's no doubt that the world is a better place because of her invaluable service.

"With grace and compassion, Mrs. Bush brought her sense of humor and steady moral compass to the White House," he continued. "She never ceased in her work to strengthen our nation."