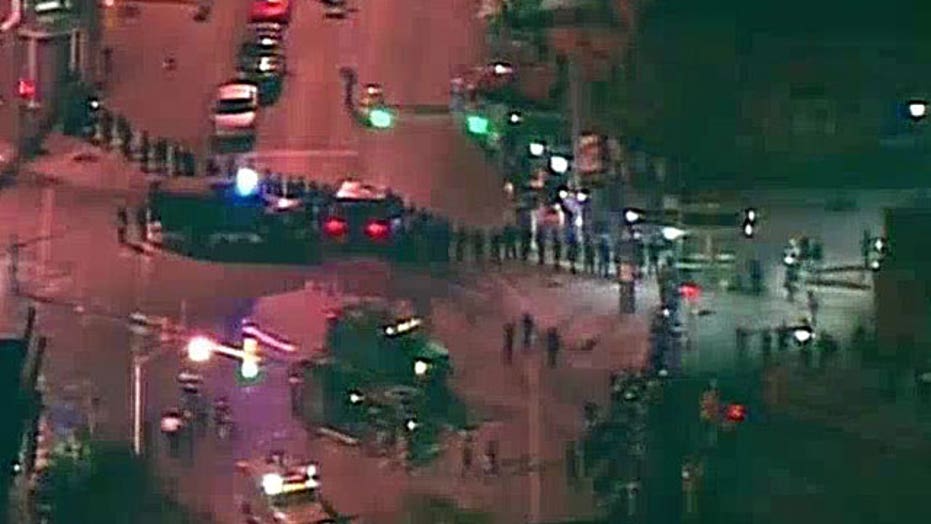 The streets of Baltimore were eerily quiet Tuesday night into early Wednesday as residents obeyed an all-night curfew enforced by 3,000 police and National Guardsmen, a day after riots engulfed the city.

The 10 p.m. curfew got off to a not-so promising start as 200 protesters initially defied the warnings of police and pleas from activists to disperse.

Some people in the crowd threw water bottles or lay on the ground as a line of police behind riot shields hurled gas canisters and fired pepper balls to push the crowd back. Demonstrators picked up the canisters and hurled them back at officers, but the crowd would rapidly disperse and was just down to a few dozen people within minutes.

The clash came after a day of high tension but relative peace and calm in Baltimore, which was rocked by looting and widespread arson Monday in the city’s worst outbreak of rioting since 1968.

Baltimore's school system said Wednesday all schools would be open and after-school sports and other activities would also take place. Monday's riots began when high schools let out for the day and students clashed with police near a major bus transfer point.

Police, political leaders and many residents condemned the violence and hundreds of volunteers showed up Tuesday to sweep the streets of glass and other debris.

"We do not have a lot of active movement throughout the city as a whole. ... Tonight I think the biggest thing is the citizens are safe, the city is stable," he said. "We hope to maintain it that way."

Batts said a total of 10 people were arrested after the curfew went into effect; two for looting, one for disorderly conduct and seven for violating the curfew.

Maryland Gov. Larry Hogan, Mayor Stephanie Rawlings-Blake and other officials made appearances throughout the day, promising to reclaim and restore pride to the city. Baltimore Public Schools CEO Gregory Thornton said in a notice posted on the school system’s website that schools would open Wednesday and all clubs and sports activities will take place.

But life was unlikely to get completely back to normal anytime soon: The curfew was to go back into effect at 10 p.m. Wednesday and baseball officials -- in what may be a first in the sport's 145-year history -- announced that Wednesday's Baltimore Orioles game at Camden Yards would be closed to the public.

The violence set off soul-searching among community leaders and others, with some suggesting the uprising was not just about race or the police department, but also about high unemployment, high crime, poor housing, broken-down schools and lack of opportunity in Baltimore's inner-city neighborhoods -- issues that are not going away anytime soon.

Activists also stressed that they would continue to press authorities for answers in the case of Freddie Gray, a 25-year-old black man who died of a spinal-cord injury under mysterious circumstances while in police custody. His case is what spurred Monday's riots.

A group of pastors announced plans to hold a rally and prayer vigil for the city of Baltimore and Gray’s family at noon Wednesday and to “draw public attention to 17 police accountability bills the state legislature failed to pass during the recent legislative session.”

Meanwhile, under the state of emergency Gov. Hogan declared Monday, the more than 200 people arrested since the unrest began could wait longer than usual to have their day in court.

Normally, state law requires that people arrested without warrants appear before a court official within 24 hours of their arrests. But as part of the state of emergency, the governor extended the period to no later than 47 hours, according to a letter he sent Tuesday to Judge Barbara Baer Waxman, the administrative judge for the Baltimore District Court.

"This exercise of my authority is necessary to protect the public safety and to address the more than 200 arrests that were made by Baltimore Police Department and other law enforcement officials," Hogan wrote in the letter, a copy of which was obtained by The Associated Press.