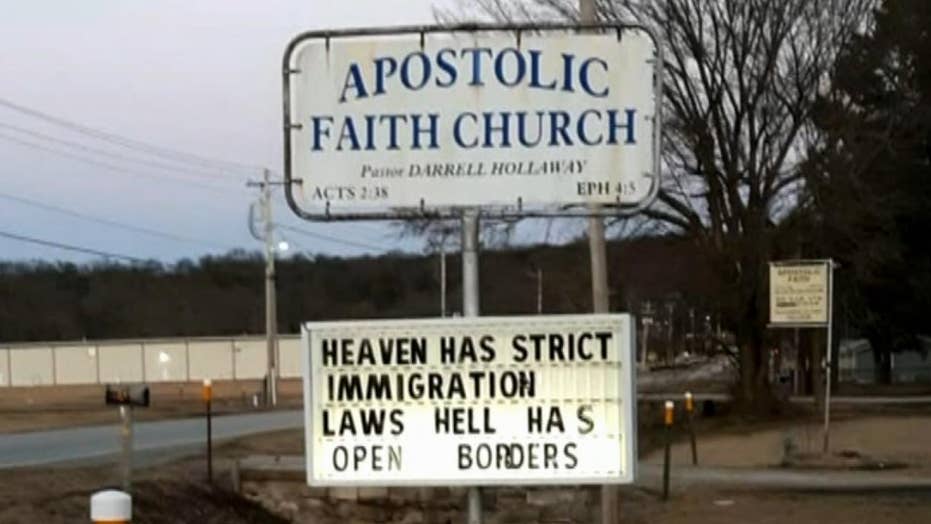 A Springdale, Arkansas church incurred backlash after putting up a sign they insist was meant to be biblical, and not in any way political.

Springdale Apostolic Faith Church, which is in an area with a large Hispanic population, was criticized by some members who felt insulted by the sign.

"A lot of undocumented and just in general immigrant people live in that area where the church is located and having to pass by that message every day, I don't think it's something they should have to go through," Irvin Camacho told FOX 24. "This is a welcoming community."

Alice Gachuzo-Colin, who also lives in the area, said she almost wrecked her car when she saw the marquee, calling it a "slap in the face" in such a diverse area.

But the church says the message was misconstrued and removed the word "immigration" from the sign.

"My wife actually came up with it before anyone else," Assistant Pastor Michael Pennington told the local FOX affiliate. "The reason we put that sign up was to tell everybody it is not easy to make heaven. If you read scriptures, it tells them the road to hell is wide and broad, but the road to heaven is narrow and straight."

Pennington noted that he ran the signage by several church leaders who never made the political connection to President Trump's bush for a border wall.

He said some people complimented the church for the biblical message.

"Every nationality of people saying we know this is a biblical meaning, we know what the meaning was behind us, we read the Bible, we know what you're getting at," he said.

The pastor apologized to anyone offended by the sign because that was never his intention.

"Everyone is welcome to our church," the Springdale leadership wrote on Monday, "We love people from all over the world!"