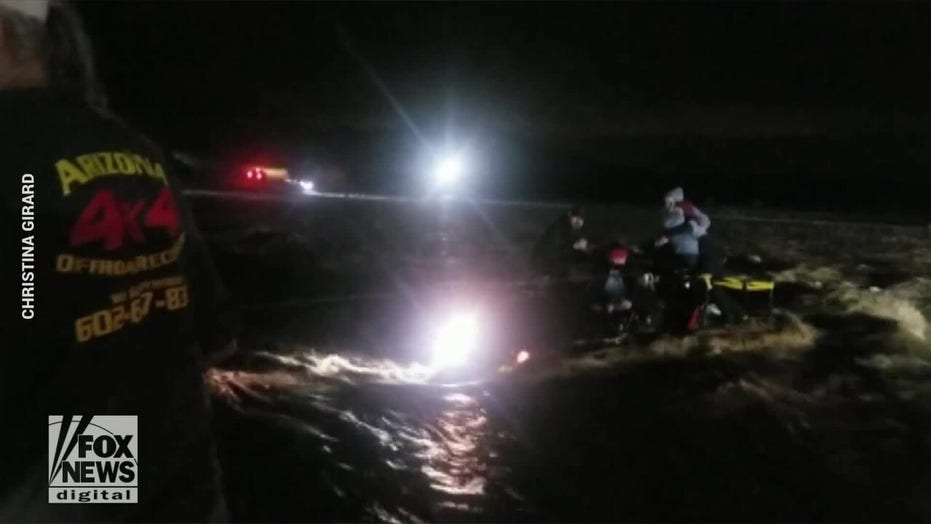 An Arizona family is lucky to be alive after they nearly got swept away in a flash flood. Watch the daring rescue that saved their lives.

A family of five in Arizona and their dog narrowly avoided being swept away in raging flash floodwaters after heavy rains over the weekend turned a creekbed into a raging torrent.

The incident happened Saturday along the Sycamore Creek in the Tonto National Forest, located near Phoenix.

The National Weather Service had issued a forecast for rain and issued a flash flood advisory as the Phoenix area and many other parts of Arizona were drenched by heavy rain.

The flash flooding ended up stranding dozens of people who were off-roading in the area, as rapidly-rising water levels in the creek cut off their escape.

Christina Girard of the Arizona Off-Road 4×4 Recovery towing service told Storyful she was in the area with another team member due to the flood warnings at the time. Girard said she watched around 50 people get stuck on the one side of Sycamore Creek as the water started to rise.

An Arizona family and their dog narrowly avoided being swept away after their SUV got stuck in rushing floodwaters on Saturday. (Christiana Girard via Storyful)

“This family of five with a small boy clutching a puppy decided to cross,” she told Storyful. “We watched their headlights disappear in the water and then sprung into action. They were holding onto the roll bars of their vehicle all up on the roof.”

Girard said the owner of Arizona 4x4 Off Road Recovery, Joe Osuch, hooked a winch cable from his car and after several throws, the man driving the submerged vehicle caught the other end. He hooked it to the roll cage and Osuch pulled the vehicle with everyone on it out.

The rescue took two to three minutes and Osuch said it was a surreal experience.

“The picture in my mind I can't get out is the 6-year-old boy sitting on this vehicle with a puppy in his left hand and his right hand holding onto the roll bar,” Osuch said. ”You could see he was just scared out of his mind."

Osuch told ABC15 that the creek "looked like the Colorado River," and was flowing at about 1,000 cubic feet per second.

The family had spent Saturday off-roading as part of a celebration of the life of a recently deceased family member, according to local media. No injuries were reported.

The creek was dry when they crossed it in the morning, Osuch said.

According to the NWS, a flash flood is defined as a rapid rise in water levels, along rivers, creeks,  or even normally dry land areas.

"Flash floods generally occur within 6 hours of the rainfall or other event that causes them," the Weather Service states. "They frequently happen with little advance notice."