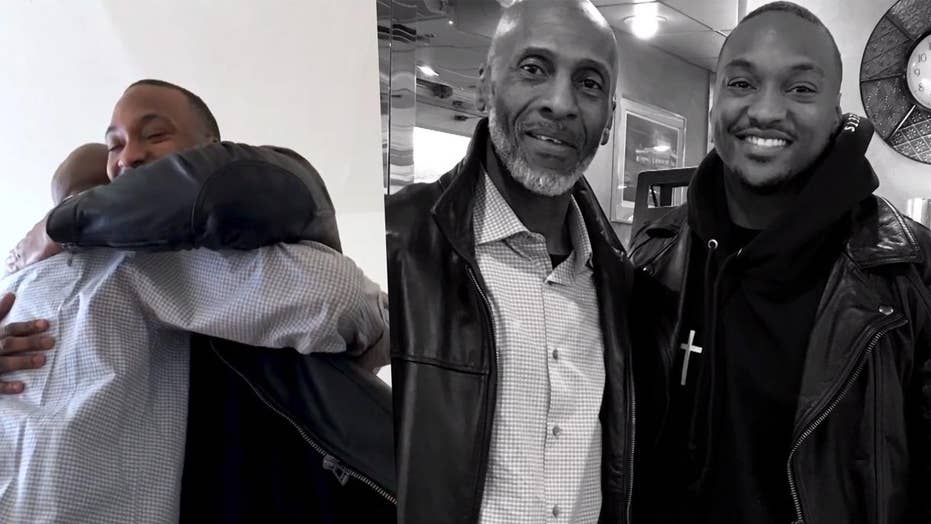 Pastor surprises church with emotional embrace of his biological father

A New York pastor surprised his congregation when he introduced his biological father, embraced him in an emotional moment during the service and revealed he had only met him for the first time earlier this year.

A New York pastor surprised his congregation when he introduced his biological father, embraced him in an emotional moment during the service and revealed he had only met him for the first time earlier this year.

Darnell Barrett, 29, who was adopted, was preaching at Hillsong Church’s special Christmas “Sunday Night Live” service at the Hammerstein Ballroom in New York City last weekend when he embraced his father.

“You know, Dad, I, uh, I prayed for this moment to be able to look you in the eye and say that you’re not a failure,” Barrett told his biological father, Hampton Robinson, 59, in front of a packed house.

It was a highlight in a journey filled with peaks and valleys for both of them.

“This whole process, if I am honest, has been incredibly painful in a ‘post-surgery’ kind of way – in that it is necessary for long term healing and reconciliation,” Barrett told Fox News. “My hope is that [our story] will continue to help others.”

“To have finally reconnected is wonderful and scary at the same time,” Robinson said. “The fact that my children even wanted to connect with me again is a dream come true and to find that they are rooted in Jesus Christ is the cherry on top. I am so proud that we are able to use our story to help others who are going through the same or similar situations.”

JOSHUA ROGERS: A CHRISTMAS I WILL NEVER FORGET - WHAT I LEARNED AFTER RACING THROUGH THE AIRPORT WITH A HAM

In a video to the congregation, Robinson shared about his addiction to drugs and being separated from his sons Darnell and Daniel, because he was deemed unfit by the state to take care of them.

“I cared about drugs more than I cared about being a good father at that time in my life,” he said. "It’s hard to look you in the eyes and say that to you, but, uh, that’s the truth.”

Barrett shared that, he too, was hurt by it from a young age.

“For years I spent struggling with identity, acceptance, rejection,” he said. “I mean, the soundtrack of my life sounded like ‘Your life is a big inconvenience.’ It sounded like maybe God does accept and love you, but your own flesh and blood doesn’t so that’s null and void.”

Robinson said he couldn’t find Barrett because of the law but “hoped and prayed the day would come” and then it finally did.

On Saturday, Jan. 6, father and son met for the first time.

“I still can’t get over how close you were, not even 10 minutes away,” Barrett told his biological father as they drove around. “I think often what we want, what we deem best for our lives, but that always doesn’t match what God’s best is for us, and I think I’ll take God’s best for every time, especially when you have moments like this where you can come together and reconcile.”

“That’s right,” Robinson, who has been sober for 10 years now, responded. “I’ll take any relationship I can get. It’s going to take time and it’s going to take us talking…I’ll accept whatever God gives us and whatever you give me, with Jesus leading us.”

After the video ended, Barrett sat in the audience and surprised the congregation with a special guest.

Darnell Barrett told his father, Hampton Robinson, something he always wanted to tell him in front of a packed church. (Hillsong Church NYC)

“My dad is here for the very first time,” Barrett said to applause, and turning to his father he added: “Welcome home. Welcome home. I love you. Love you.”

Barrett told his father “you’re not a failure,” a moment they had both prayed for a long time.

“I was sort of praying for this moment and asking God what to give you because I know you have a hard time forgiving yourself,” Barrett said, adding that God was going to restore his past like the promise in Joel 2:25 “so I will restore to you the years that the swarming locust has eaten…’

“I think that the word for you is there’s a harvest coming between you and I,” Barrett said.

“The latter is greater than your past,” Barrett said as he embraced his dad. “I love you.”

During the entire service, on the keys, was Barrett’s brother, Daniel, whom he called his “absolute hero.” Daniel accompanied Darnell in a jazz-style cover of the song “Highs and Lows” by Hillsong Young & Free.

Darnell and Daniel, both brothers adopted at a young age, were able to meet their biological father, a moment they dreamed of their whole lives. (Hillsong Church NYC)

“We were adopted together, and I remember being in our rooms…and we would always sit together and reminisce what it would be like to meet our biological family, and those conversations, to be quite candid, were often filled with tears, anger, and frustration, but we always ended it by saying, ‘God is on our side.’”

And then to close out the service, Pastor Carl Lentz, Hillsong NYC lead pastor, spoke to Robinson.

“It’s not about how you start, you know that. It’s about how you finish, and I know you’re son. He’s a man of God. He’s a blessing.”

Lentz referenced the baby dedication from the beginning of the service.

“God’s promise, the same psalm for this amazing young dad is for you: A household full of children will not bring shame on your name but victory when you face your enemies. Your offspring will have influence and honor, and they’re going to prevail on your behalf.”

COUPLE ADOPTS 7 SIBLINGS AT ONCE, GIVING THEM A 'FOREVER FAMILY' AHEAD OF CHRISTMAS'

He added with a smile: “You’re a good man and God’s using your boys. I just wanted you to know that and we love you. It’s an honor to have you.”