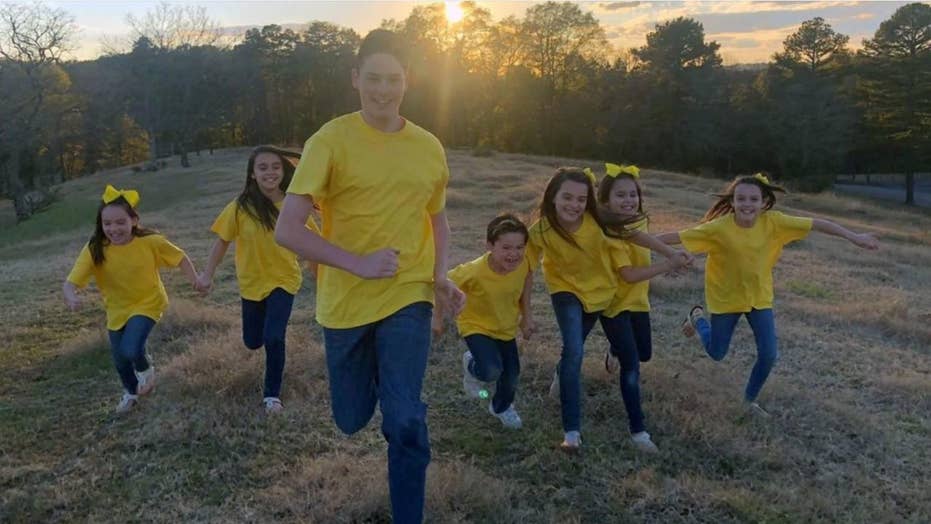 Arkansas couple adopts seven siblings at once, giving them a ‘forever family’ ahead of Christmas

Michael and Terri Hawthorn didn’t plan on adopting any kids when they decided to become foster parents, but it didn’t take long for that to change and this Christmas their family is more than double the size it was last year.

Michael and Terri Hawthorn didn’t plan on adopting any kids when they decided to become foster parents, but it didn’t take long for that to change and this Christmas their family is more than double the size it was last year.

“I don't think we ever planned on this,” Michael, 56, told Fox News, “but things change in life. You open your doors to these children - especially the ones that spend time with you...they were like our own kids even before we adopted them. We reached a point where we couldn't let them leave."

It all started with Korgen, 3, who was just three weeks old when they got him in foster care three years ago. At four months, Korgen, who is nonverbal and has several health issues, had breathing problems and was rushed to a children’s hospital. Doctors said he wasn’t doing well until he heard Terri’s voice and his condition improved in her presence. She knew right there that he was put in their lives for a reason.

Haizlee, 1, and Korgen, 3, Hawthorn were both adopted together in April. (Micah Hawthorn/Micah's Outdoor Photography)

When the DHS adoption specialist told them Korgen had a potential adoptive match, Terri, 54, told her: “No, no, no, that’s me….I could not love him more even if I birthed him. We love him unconditionally.”

And then they got his younger sister, Haizlee, who is now a year and a half.

Those two were adopted in April of this year, and seven months later, they added seven to the mix.

Twins, Lacey and Layna, 10, were the first to meet the Hawthorns and started calling them “mom” and “dad” within two days. It was at that point, Michael jokes, he knew he was in trouble.

For Kyndal, 11, it only took two hours with the Hawthorns and she told Michael it was the best day of her life and asked him if they would adopt her.

The seven siblings didn’t all come at once, and at one point they were separated from each other for nine months, a painful time for both sides who were all preparing and praying that they would be together again. The Hawthorns told the kids they loved them and that they were fighting for them. They said they depended on the Lord’s guidance more than ever.

The Hawthorns wore their new t-shirts showing the seven siblings they added to their family early in December. (Micah Hawthorn)

Earlier this month, they got the answer to their prayers. All seven siblings got the name Hawthorn at the Saline County Courthouse, even though they had already been writing it on their schoolwork. Dawson, 15, Kyndal, 11, Lacy and Layna, 10, Addiley and Arria, 9, and Nixson, 8.

“I’d been praying to have a family that I can enjoy Christmas with,” Dawson, the oldest sibling, told Fox News. “You’re safe. You know you’re not going to leave and it’s good to know you’re in a forever family and you won’t have to worry about danger.”

Dawson and his siblings thought their lives growing up were normal – the verbal and physical abuse, not getting enough food and unlivable home conditions.

The Hawthorn's newest seven siblings love running around outside and playing at their new home. (Micah Hawthorn/Micah's Outdoor Photography)

When the kids arrived at the Hawthorns, Dawson said he had only brushed his teeth twice in his life and they only had one toothbrush. At Christmas, the gifts that were given to them by Angel Tree or other groups were burned or taken away from them by their biological parents who were also addicted to drugs.

“These are survivors. These kids are very strong,” Terri said, adding that she knows there’s going to be trauma and hardships overcoming their past, but she says her children will be loved no matter what.

“I don't actually consider us unique,” Terri said. “I just feel like God has blessed us with the ability to love unconditionally. I just feel like children are a gift from God. These children don't ask to come into foster care - they come from horrible, horrible, situations some of them…we feel like we're a rescue home for them.”

Michael and Terri Hawthorn pose with a sign the day they adopted seven siblings to their family. (Micah Hawthorn)

While they never planned for adoption, there were many points in their lives that led them to this point.

“My husband and I have been married for 35 years, and when we first got married, there was a girl that needed a babysitter, so we started keeping her. The mother got really ill and ended up in prison, so we ended up raising her for seven years and another child for five years. So we started raising other children before our own,” Terri said. “We still consider them family, too.”

And since then they’ve had an ever-expanding family – reaching all around the globe. Terri worked for American Cultural Exchange Services (ACES) and hosted foreign exchange students for 15 years. They always had two students with them – from Brazil, Thailand, Korea, Germany, Japan, and many more.

All but one of the Hawthorn's adopted kids pose with Santa as they will all be celebrating Christmas as one family this year. (Micah Hawthorn)

“We’re parents to kids all around the world,” she added.

And while the couple’s four biological children – Ryan, 32, Blake, 28, Jordan, 25, and Micah, 20 – are now all grown up and out of the house, they all live on a shared family plot of 45 acres in Hot Springs National Park, surrounded by cows and dogs.

Their dog, Cocoa, was a rescue dog named by a student from Slovakia. They also have a miniature horse named Blaze and the boys have a guinea pig named Gus.

The newly adopted Hawthorn kids play outside at their new "forever home."

The Hawthorns have to take two vehicles when they go places. Mom and Dad each driving.

Micah said, recently on a Sunday, she had a chance to reflect on all that has happened.

“Oh my goodness, we have so many kids, this looks crazy…the whole pew all the way down,” she said.

And recently Micah saw the movie Instant Family, which follows a couple that decides to become foster parents and ends up adopting three kids at once.

“They know exactly what that’s like,” Micah said, but she added that her new siblings came from a much worse situation than the kids in the film.

And while they never planned for this, they’re thankful for God’s plan for their lives.

“They just thought they were done after me,” Micah said.

Terri joked: “I always wanted a dozen, and 20 years later, God’s blessed me with my dozen plus one.”