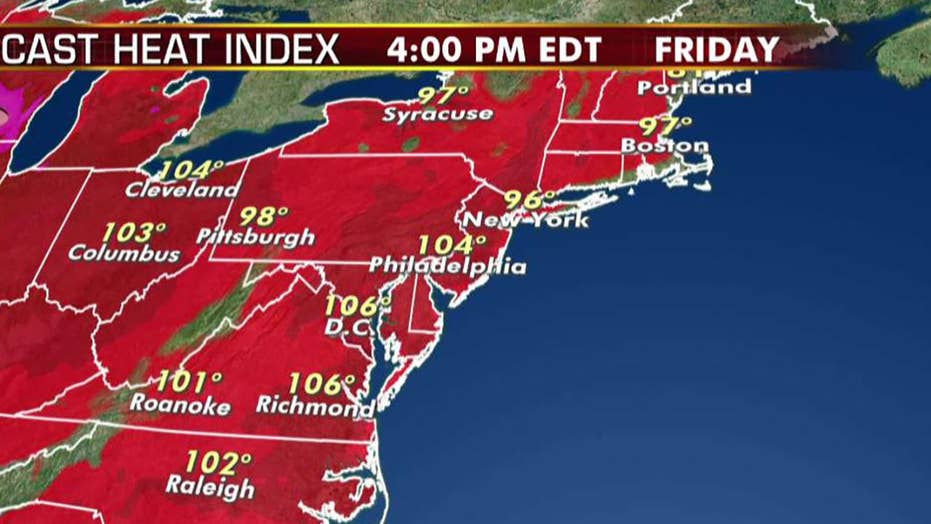 More than 200 million Americans in parts of the central and eastern U.S. will experience temperature indexes of over 100F as a heat wave is expected to slam at least 29 states over the weekend.

Temperatures have been heating up but officials are now warning that the hottest weather has yet to come as more than 100 local heat records are expected to fall Saturday, according to the National Weather service.

An excessive heat warning was issued for parts of Ohio early Friday morning and is expected to continue until at least 8 p.m. Saturday. Cities like Toledo, Cleveland and Fremont will see an index, which is what the temperature will feel like, as high as 110F with the highest index occurring in the late afternoon and early evening.

PADMA LAKSHMI GETS READY FOR HEAT WAVE IN PURPLE BIKINI, BRAGS ‘NO RETOUCHING UP IN HERE’

High humidity and poor air quality are also expected as residents are being asked to stay indoors and avoid outdoor work or extended exposure to the heat.

Further out west in Omaha, Nebraska, people can expect to see a temperature index as high as 117F with a similar excessive heat warning in effect until Saturday night.

More than 200 million people in the central and eastern U.S. in total will experience temperatures in the mid to high 90s with little to no relief overnight as at least 29 states from Arizona to New York seeing an index of over 100, AccuWeather reported.

A high-pressure system stretching from coast-to-coast is keeping the heat turned on. The heat and humidity are made to feel worse by the large amount of moisture in the air coming from the Gulf of Mexico, much of it left from Hurricane Barry.

The Environmental Protection Agency's live air quality tracker reported that the air was "unhealthy" this week for sensitive groups in a stretch of the East Coast from Baltimore to Bridgeport, Connecticut, including Philadelphia and New York City.

Officials with the New York City Triathlon announced Thursday that Saturday’s race had been canceled due to the extreme heat that was expected.

The race organizers said they were "unable to provide either a safe event experience or an alternate race weekend."

He declared an emergency Thursday night asking buildings taller than 100 feet to raise their thermostats to 78F.

“We are about to enter a heat emergency, and must do all we can to keep New Yorkers safe,” de Blasio said. “The City government is limiting its energy use to reduce strain on the electrical grid, and now private office buildings will also have to do their part.”

New York is expected to see its hottest temperatures of the summer so far this weekend along with Washington D.C. which could see numbers over 100 for the first time since August 2016, Weather.com reported.

A Galapagos tortoise cools off in a shower of water from a zookeeper at the Oklahoma City Zoo, Thursday, July 18, 2019, in Oklahoma City.  (AP)

Such heat can be deadly. Over three days in July 1995, more than 700 people died during a heat wave in Chicago as temperatures rose above 97F. Many of the dead were poor, elderly and lived alone.

The National Weather Service is asking residents to check on neighbors, especially the elderly and to keep animals indoors if possible.