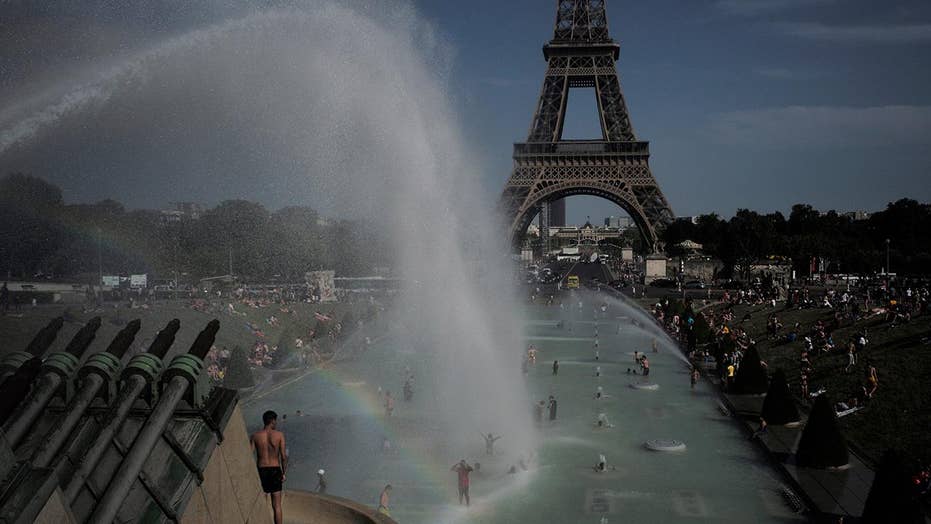 From the U.K. to Spain, Europeans swelter under abnormally high temperatures.

Europe has been hit with a record-breaking heatwave, with temperatures soaring past 110 F and already taking several peoples’ lives.

The temperature in France hit its record high – 114.6 F – in the southern village of Gallargues-le-Montueux.

The previous record was 111 F during a heatwave back in 2003 that took the lives of thousands of people.

Youngsters cool off at the Trocadero public fountain in Paris, Wednesday, June 26, 2019. High temperatures are expected to go up to 39 degrees Celsius (102 Fahrenheit) in the Paris area later this week and bake much of the country, from the Pyrenees in the southwest to the German border in the northeast. (AP Photo/Francisco Seco)

Weather experts say the heatwave is due to hot air drawn in from northern Africa, which is caused by high pressure over central Europe and a storm stalling over the Atlantic.

Mayor Freddy Cerda said the temperature is just what his village has to “put up with.”

“We have to put up with this climate, and that's what the future holds for us, don't forget. The south of France is going to become tropical,” he said, according to the BBC.

The record-shattering temperate prompted French government officials to issue warnings, with Health Minister Agnès Buzyn saying “everyone is at risk.”

Girls wearing swimsuits sit along the Canal de l'Ourcq in Paris, Friday, June 28, 2019. Schools are spraying kids with water and nursing homes are equipping the elderly with hydration sensors as France and other nations battle a record-setting heat wave baking much of Europe. (AP Photo/Lewis Joly)

A red alert was issued for four areas in France, while most of the country remains an orange alert, the second-highest alert.

The heatwave also hit Germany, Poland and the Czech Republic – all of which reported their highest-ever June temperatures.

An animal keeper puts suntan lotion on a lowland tapir during the hot summer weather in an animal park in Hodenhagen, Germany, Wednesday, June 26, 2019. Germany faces a heatwave with high temperatures and UV radiation. (Mohssen Assanimoghaddam/dpa via AP)

The Italian Health Ministry said seven cities, including Florence, Rome and Turin, have already been at Italy’s highest heat warning level Thursday. On Friday, 16 cities were under alerts for high temperatures.

Italian authorities instructed people to avoid being outside during the hottest hours of the day and to stay away from areas with a lot of vehicle traffic to prevent ozone exposure.

In Spain, firefighters had to put out a major wildfire in the northeastern Catalonia region amid the heatwave.

Firefighters try to extinguish a wildfire in Palma d'Ebre, near Tarragona, Spain, Thursday, June 27, 2019. Authorities suspect the cause of the outbreak was a deposit of improperly stored manure. Firefighters say that high temperatures and a drop in humidity will likely fan the flames. (AP Photo/Jordi Borras)

While the Spanish authorities say they successfully contained the fire, they warned that wind and temperatures forecast to remain around 104 degree Fahrenheit could give the blaze fresh impetus on Saturday.

Several people so far died as a consequence of the extreme temperature. Two people have in Spain due to the suspected heatstroke, the BBC reported.

One, a 17-year-old farm worker in Córdoba, had seizures after cooling down in a swimming pool, while an 80-year-old man died on a street.