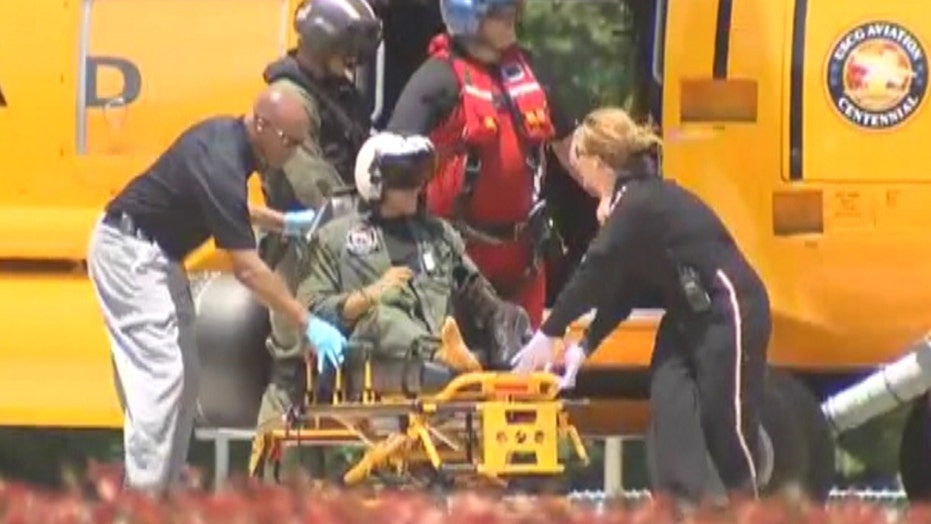 Two Navy jet fighters crashed off the coast of North Carolina during a routine training mission on Thursday, sending four people to the hospital, officials said.

Early reports indicated that the jets collided, but that was not confirmed by the Navy as of Thursday afternoon.

The Coast Guard said four people were recovered and have been rushed to a hospital. A Navy official said the crews were rescued by a nearby fishing boat. A Coast Guard helicopter was also on scene, about 20 to 30 miles off Cape Hatteras.

The Coast Guard helicopter was dispatched from the air station in Elizabeth City, North Carolina. The station's helicopters perform ocean search-and-rescue operations off North Carolina and Virginia as far east as Bermuda.

The fighters were based in Virginia Beach and collided about 10:40 a.m., said Navy spokesman Ensign Mark Rockwellpate. Witnesses reported seeing four parachutes floating down into the Atlantic after the incident.

The sea route is heavily traveled by ships entering and leaving Norfolk, one of the busiest cargo ports on the East Coast.

A Navy official told Reuters that initial reports point to some kind of an "in-flight mishap." The jets were conducting a routine training mission. The Navy said it will conduct a "safety investigation."

The F/A-18 Hornet is an all-weather fighter and attack aircraft that operates in tactical squadrons at stations around the world and from 10 aircraft carriers, the Navy says on its website.

The Super Hornet, the newest model, has a longer range, aerial refueling capability and improved survivability and lethality, according to the website.

Each of the planes costs at least $57 million, the Navy says.

A Pentagon official said that witnesses spotted four parachutes floating over the Atlantic Ocean. The injuries are not immediately known, but "all four are alert," the Navy official said.