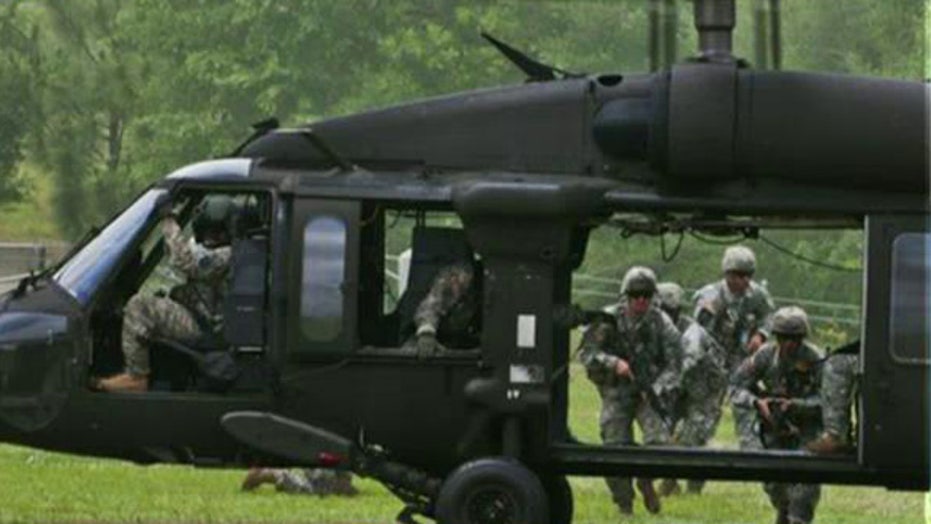 The Louisiana National Guard said Thursday that the bodies of two soldiers have been recovered from a Black Hawk helicopter wreck off the Florida coast.

A news release from the Guard said the bodies of two others are believed to still be inside the wreckage. The release says officials cannot confirm the other two soldiers are inside until a salvage crew is able to recover the aircraft.

Search crews located the Black Hawk submerged in about 45 feet of water in the middle of Big Bay and announced the rescue mission has turned to a recovery effort.

The helicopter, which was carrying seven Marines and four soldiers, was first located at 9 a.m. Wednesday by Coast Guard sonar located in the bay, officials said. Divers were sent to the location to get a visual and confirmed that the debris was the helicopter. The helicopter was broken up in several pieces.

"At this point, we are not hopeful for survivors and we're transitioning our search and rescue to a recovery effort," said Col. Monte Cannon, who is overseeing the search.

The military is not yet releasing the names of those killed in the crash or any details about them, Cannon said.

Heavy fog, rain and rough surf complicated efforts to recover the remains of those killed. The military has provided few details about the crash, which happened Tuesday night in fog so thick that another helicopter turned back.

The same fog and crashing Gulf waves surrounded a pier where a large gathering held vigil Wednesday night, creating a somber backdrop to the songs, tears and prayers of people with strong ties to the military and the sprawling Eglin Air Force Base.

Dozens of airmen walked the shores of Santa Rosa Sound on Thursday, and the Coast Guard searched for debris in the water, said Mike Spaits, a base spokesman. Pieces of clothing and bits of the UH-60 Black Hawk helicopter have washed ashore, and homeowners have contacted the military to pick it up, he said.

The helicopter that crashed had a veteran crew from Hammond, Louisiana, that served multiple tours in Iraq and helped humanitarian missions after Gulf Coast hurricanes and the BP oil spill.

They were carrying "unconventional warriors" from the Marines Special Operations Command. Like the Army's Green Berets and the Navy's SEALs, they were highly trained to endure grueling conditions and sensitive assignments on land and at sea, from seizing ships to special reconnaissance missions and direct action inside hostile territory.