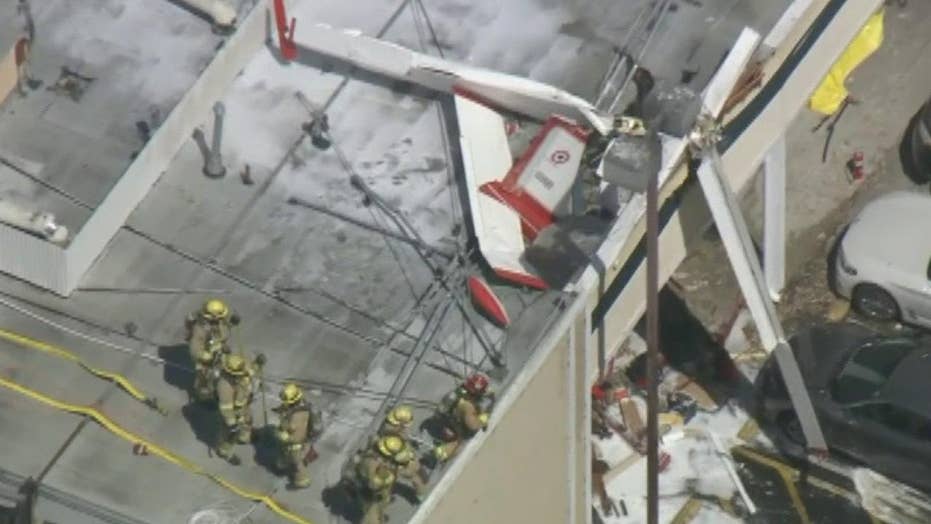 One dead, one injured after small plane crashes onto strip mall roof in California

One critically injured passenger was taken to a hospital, according to the Torrance Police Department,

One person was killed and another was critically injured after a small plane crashed into a building roof in Southern California on Thursday, officials said.

The single-engine Cessna 177, with two people aboard, crashed around noon about a mile east of the Los Angeles-area Torrance Municipal Airport, a Federal Aviation Administration (FAA) spokesman said.

One person has died and another is in critical condition after a small plane crashed into a building roof in Southern California on Thursday, officials said. (KTTV)

Video of the scene showed wreckage on the roof of a commercial building and in a parking lot below.

The plane landed on top of a building in a shopping plaza, Fox 11 reported, adding that officials with the Torrance Fire Department said the plane penetrated the roof. No injuries were reported in the building or on the ground.

“I just saw the plane looking like it was trying to get altitude,” Omid Taheri, who witnessed the crash from across the street at a car dealership, told The Daily Breeze. “Then it turned sideways and to the right and then took a nosedive straight down.”

Torrance resident Tina Schneider, who works in the building next to the crash site, also reportedly saw the plane fall. She told the newspaper she saw the plane take off, then make a U-turn.

“You could hear the plane was having problems,” Schneider said, adding that she then saw the plane hit the building.

“There was a guy, hanging upside down and dangling,” she told the paper. “He was alive, stuck in his [seatbelts].”

She said gasoline was pouring out of the plane.

“Then they cut [the man] out of his straps and pulled him to the side,” Schneider said.

The person who was killed has not yet been identified.

The National Transportation Safety Board and the FAA are investigating.