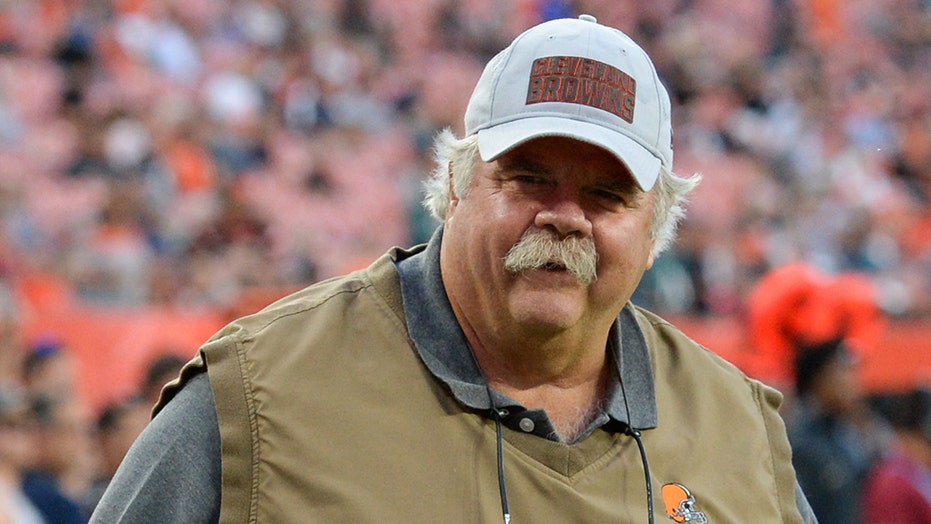 Former Cleveland Browns assistant Bob Wylie criticized current coach Freddie Kitchens over the way Kitchens handled the decision not to retain him on his staff.

Wylie, who appeared on CBS Radio’s “The Zach Gelb Show” on Saturday, said he was bothered by the firing.

“My daughter called me and said, ‘Hey, dad, you just got fired today,’” Wylie said. “That’s the first time I heard about it. I was lying in a hospital bed…they packed up my office and they put my office in storage because I was still in the hospital.”

According to Browns Wire, Wylie had to take some time away from the team after suffering a leg injury.

Wylie also said he felt like defensive coordinator Gregg Williams may have been a stronger candidate for the head coaching job and that Kitchens probably got the job because of his relationship with upstart quarterback Baker Mayfield.

Offensive line coach Bob Wylie of the Cleveland Browns on the field prior to a preseason game against the Philadelphia Eagles on August 23, 2018 at FirstEnergy Stadium in Cleveland, Ohio. (Photo by: 2018 Nick Cammett/Diamond Images/Getty Images)

“Bob doesn't wear brown and orange anymore,” Kitchens said. “I had the opportunity to hire Bob. I did not want to.”

Kitchens added: “I know Bob Wylie to be a good person and out of respect to his family, I won't get into any of that because he's a father, he's a husband, he's a granddad. But I would just say this about that whole situation: Bob knows what happened. Bob knows what was going on, and when he was here, he knew everything about it. Listen, Bob wasn't under contract. He forgot to tell everybody that.

“He had talked about retiring forever, all right? So sometimes when a person says something, they have to be made to feel relevant, OK? Bob's a good person and I don't want to lose sight of that. I have too much respect for him as a person.”

Kitchens was then asked if he was angered by Wylie’s comments.

Kitchens also dismissed the notion that Wylie was forgotten while he was hospitalized for nearly four months.

“I went to the hospital to see Bob every week he was in the hospital. I FaceTimed Bob before every game before we went out as a staff just so he would continue to feel a part of it. At what point does Bob realize it was the players and not the coaches that turned it around?" Kitchens said. "Now, that is the last thing I will say about it.”

The Browns start their preseason schedule Thursday against the Washington Redskins.