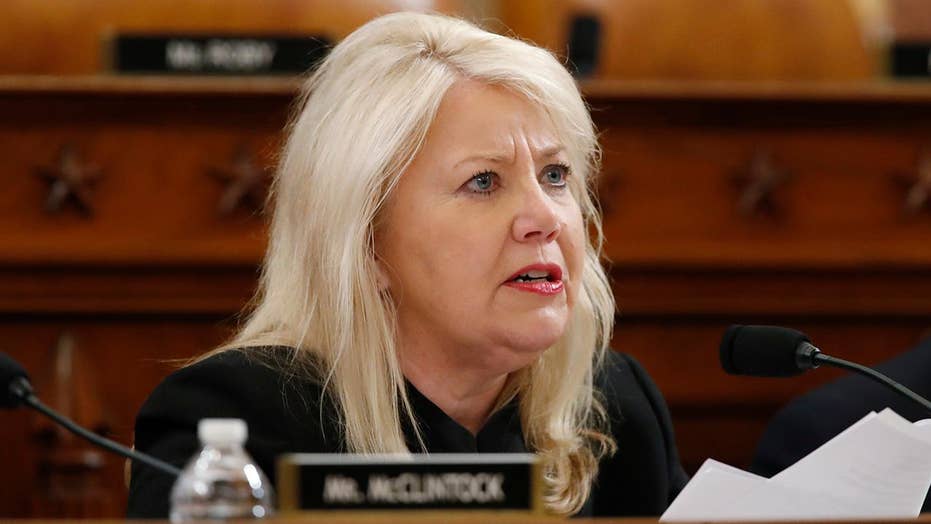 Rep. Debbie Lesko, R-Ariz., asked House Judiciary Committee Chairman Jerrold Nadler to cancel any upcoming hearings related to President Trump's impeachment inquiry because it violated Nadler's "own standards for any impeachment proceedings," she wrote in a letter to him on Wednesday.

Lesko's letter reiterated a point that she and other Republican lawmakers hammered home during the committee's first public hearing -- namely that Nadler's stance on whether or not Trump committed impeachable offenses contradicts prior statements he made about the criteria for removing a president from office.

During the hearing, Lesko quoted Nadler from an interview on MSNBC's "Morning Joe" on Nov. 26, 2018, when he outlined three questions that needed affirmation before impeachment could be pursued.

"Number one, has the President committed impeachable offenses? Number two, do those offenses rise to the gravity that's worth putting the country through the trauma of an impeachment proceeding? And number three, because you don't want to tear the country apart," he said at the time.

"You have to be able to think at the beginning of the impeachment process that the evidence is so clear, of offenses so grave, that once you've laid out all the evidence a good fraction of the opposition, voters, will reluctantly admit to themselves they had to do it," Nadler said. "Otherwise, you have a partisan impeachment which will tear the country apart. If you meet those three tests, I think you do the impeachment."

Lesko used the majority of her time to lay out her argument forgoing questioning of the four legal scholars brought before the committee to weigh in on whether or not Trump initiated a "quid pro quo" deal with Ukraine by withholding military aid to the country until Ukrainian President Volodymyr Zelensky promised to open an investigation into the Ukraine business dealings of 2020 Democratic candidate Joe Biden and his son Hunter Biden.

"Not one single Republican voted on the impeachment inquiry resolution or on the Schiff report reveal the opposite is true," Lesko said. "In fact, what you and your Democratic colleagues have done is opposite of what you said had to be done."

Lesko parroted her Republican colleagues, calling the impeachment inquiry "partisan" and a "sham," and accusing Nadler and the Democratic caucus of embarking on an investigation "all for political purpose."

"With all due respect to the chairman, I do not believe that those factors were satisfied," Turley said.

Nadler officially entered Lesko's letter into the record, in which she urged him to "follow your own advice and cancel these hearings."

In his closing statements, Nadler pointed to the three-part test for impeachment and insisted that "all three parts of that test have been met."

"The president asked a foreign government to intervene in our elections, then got caught, then obstructed the investigators. Twice," Nadler said.

"Our witnesses told us in no uncertain terms that this conduct constitutes high crimes and misdemeanors, including abuse of power," he added.