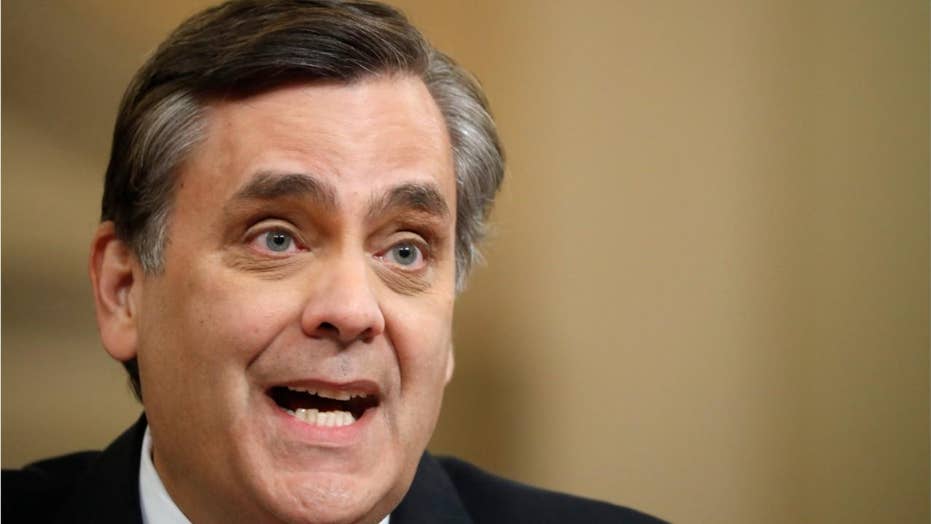 In his opening statement, Jonathan Turley, a law professor at George Washington University Law School, told lawmakers that, while he is not a "supporter" of the president, he is concerned about the “integrity” of the impeachment process based on the case being built against Trump.

At the center of the impeachment inquiry, which began in September, is Trump’s July 25 phone call with Ukrainian President Volodymyr Zelensky. During the call, Trump pressed Zelensky for investigations that could help him politically, including relating to former Vice President Joe Biden and his son, Hunter.

Turley, in his opening statement, said, "The reference to the Hunter Biden deal with Burisma should never have occurred and is worthy of the criticism of President Trump that it has unleashed. However, it is not a case of bribery."

He argued the “issue is not whether these comments are correct, but whether they are corrupt.” Turley said if Trump "honestly believed that there was a corrupt arrangement with Hunter Biden that was not fully investigated by the Obama administration, the request for an investigation is not corrupt, notwithstanding its inappropriateness.”

“In my view, there is no case law that would support a claim of corrupt intent in such comments to support a bribery charge,” Turley said. Still, he said, “There is no question that an investigation of the Bidens would help President Trump politically."

Turley, a Republican witness, will testify alongside three other legal scholars — Stanford Law professor Pamela Karlan, Harvard Law professor and Bloomberg columnist Noah Feldman, and University of North Carolina Law Professor Michael Gerhardt — all of whom are witnesses for the Democrats.

“President Trump will not be our last president and what we leave in the wake of this scandal will shape our democracy for generations to come,” Turley said. “I am concerned about lowering impeachment standards to fit a paucity of evidence and an abundance of anger.”

He added: “If the House proceeds solely on the Ukrainian allegations, this impeachment would stand out among modern impeachments as the shortest proceeding, with the thinnest evidentiary record, and the narrowest grounds ever used to impeach a president.”

“If we are to impeach a president for only the third time in our history, we will need to rise above this age of rage and genuinely engage in a civil and substantive discussion,” he said.

The hearing is slated to set the stage for the next phase of the House impeachment inquiry into the president. House Judiciary Committee Chairman Jerrold Nadler, D-N.Y., last week announced the hearing which he said would weigh whether the president’s actions reach a level of “high crimes and misdemeanors” and warrant articles of impeachment.

Nadler invited the president and counsel to participate in the hearing, but the White House declined.

“This baseless and highly partisan inquiry violates all past historical precedent, basic due process, rights, and fundamental fairness,” White House counsel Pat Cipollone wrote in a letter to Nadler on Sunday, accusing the chairman of “purposely” scheduling the proceedings to coincide with the president’s attendance at the NATO Leaders’ Meeting in London.

The hearing on Wednesday is expected to be of similar format to the House Intelligence Committee’s public hearings last month. The hearing will begin with a 45-minute period for the Democrats, most likely led by Judiciary Committee counsel Norm Eisen. Republicans will then get 45 minutes. Then, the hearing will go to five-minute rounds for each of the 41 members.

Trump’s July 25 phone call with Zelensky prompted a whistleblower complaint to the intelligence community inspector general and, in turn, the impeachment inquiry in the House. Trump has challenged the accuracy of that complaint, though the transcript released by the White House did support the core allegations that he pressed for politically related investigations.

This week, House Intelligence Committee Chairman Adam Schiff, D-Calif., transmitted a report with the majority’s findings from their inquiry, which concluded last week. The report concluded that Trump withheld nearly $391 million in military aid from Ukraine, conditioning its delivery as well as a White House visit for Zelensky on a public announcement that he was conducting investigations into former Vice President Joe Biden and his son, Hunter Biden’s, business dealings in Ukraine, as well as issues related to the 2016 election. The Democrats’ report also accuses Trump of committing obstruction by instructing witnesses not to comply with congressional subpoenas.

Meanwhile, Republicans on the Intelligence Committee drafted a report of their own, which rejected Democrats’ claims, stating there is no evidence for impeachment.