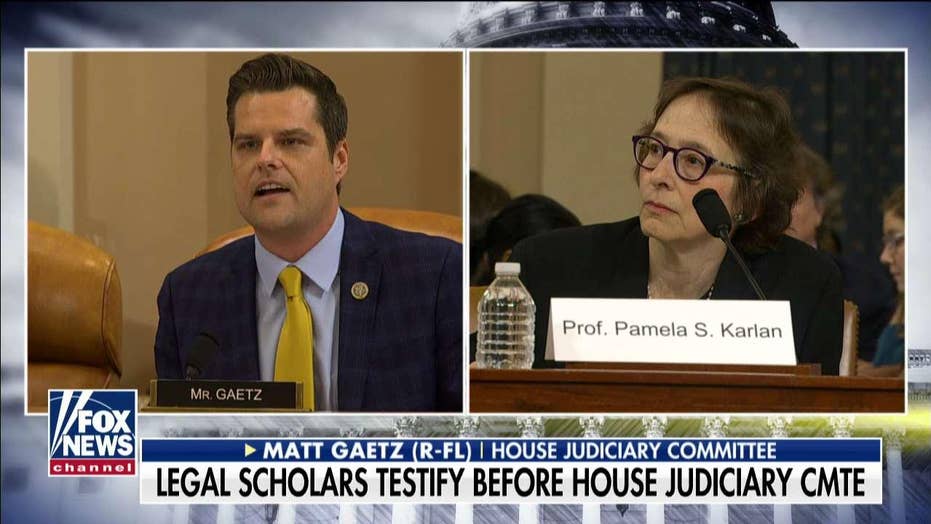 Lawmakers and legal scholars sparred Wednesday during the House Judiciary Committee’s impeachment inquiry, with Democrats and their witnesses reviving concerns raised during the Russia probe, and Republicans and their sole witness arguing the impeachment of President Trump is “predetermined,” “woefully inadequate,” and “dangerous.”

In perhaps the most heated moment of the day, Florida GOP Rep. Matt Gaetz unloaded on the Democrat witnesses' apparent bias, noting that Stanford Law professor Pamela Karlan had appeared on an anti-Trump podcast, disparaged conservatives, and donated $1,200 to Barack Obama, $2,000 to Hillary Clinton, and $1,000 to Elizabeth Warren.

Gaetz noted that Karlan has previously suggested that conservatives, unlike liberals, can't bear to live around each other: "[L]iberals tend to cluster more," Karlan has said. "Conservatives, especially very conservative people, tend to spread out more, perhaps because they don’t even want to be around themselves."

Under questioning from Gaetz, Karlan broke in and insisted she did not have contempt for conservatives. "You don’t get to interrupt me on this time," Gaetz shot back.

Gaetz then hammered Karlan, who has made a slew of other anti-Trump comments, for invoking Barron Trump's name at one point in her testimony, saying it only further damaged her credibility.

"When you invoke the president’s son’s name here, when you try to make a little joke out of referencing Barron Trump, that does not lend credibility to your argument- it makes you look mean," Gaetz said. ("I will give you one example that shows you the difference between him and a king, which is, the Constitution says there can be no titles of nobility," Karlan had said. "So while Trump can name his son 'Barron,' he can't make him a baron.")

First Lady Melania Trump also condemned Karlan with a tweet that was read aloud in the hearing late in the evening.

"A minor child deserves privacy and should be kept out of politics," she wrote. "Pamela Karlan, you should be ashamed of your very angry and obviously biased public pandering, and using a child to do it."

Gaetz concluded his questioning by pointing out that none of the witnesses, by their own admission, had any personal knowledge of "a single fact" related to the accusations against the president. Instead, Karlan discussed a range of topics unrelated to her scholarship -- even claiming at one point that Ukraine needed protection so that Russians do not attack Americans at home.

The hearing set the stage for the next phase of the Democratic-led House impeachment inquiry, with legal professors from top law schools around the country making the case that the president did abuse the office of the presidency. But Republicans pushed back against those experts, accusing the witnesses called by Democrats of espousing anti-Trump views, while also blasting Democrats for an “unfair process” altogether.

The allegations center around Trump's now-infamous July 25 phone call where he asked Ukrainian President Vlodymyr Zelensky to launch investigations into former Vice President Joe Biden and his son Hunter Biden’s business dealings in Ukraine, as well as issues related to the 2016 presidential election.

However, at various points during Wednesday's hearings, Democrats and their witnesses invoked Special Counsel Robert Mueller's Russia probe, saying Mueller's report proved the president had obstructed justice by suggesting at one point that Muelle be fired during the investigation.

Karlan testified alongside Harvard Law professor Noah Feldman and University of North Carolina Law professor Michael Gerhardt -- all witnesses called by Democrats on the committee who did not hesitate on Wednesday to call Trump's actions impeachable. Jonathan Turley, a law professor for George Washington University Law School, was the sole witness called by Republicans on the Judiciary Committee for the hearing, and he said Democrats had not made their case.

Although Turley said he hadn't voted for Trump, he chided Democrats for rushing the impeachment process without waiting for court rulings on their subpoenas for various Trump administration officials. Turley also conceded that it was possible Trump had set up an illicit and impeachable quid pro quo -- but he asserted there was simply no evidence in the record to prove the claim.

The Democrats' witnesses, however, conceded no ground whatsoever.

"If we cannot impeach a president who abuses his office for personal advantage, we no longer live in a democracy—we live in a monarchy, or we live under a dictatorship," Feldman breathlessly claimed.

In his opening statement, Feldman was similarly unequivocal: “On its own, soliciting the leader of a foreign government in order to announce investigations of political rivals and perform those investigations would constitute a high crime and misdemeanor,” adding that the president’s alleged move to withhold critical military aid to Ukraine and a White House meeting with Zelensky in exchange for the announcement of those investigations are both acts that “constitute impeachable high crimes.”

“Each encapsulate the framer’s worry that the president of the United States would take any means necessary to ensure his re-election,” Feldman continued, later explaining that abuse of power is “when the president uses his office…not to serve the public interest but to serve his private interest.”

Karlan and Gerhardt echoed a similar sentiment, with Gerhardt claiming that the president has committed “several impeachable offenses,” including obstruction of justice and a “pattern of abusing” his office.

“If Congress fails to impeach here, then the impeachment process has lost all meaning,” Gerhardt said.

When asked whether the president “sacrificed the country’s interest in favor of his own,” all three Democrat-called legal experts answered definitively, “yes.”

Turley, however, argued the opposite.

“One can oppose President Trump’s policies or actions but still conclude that the current legal case for impeachment is not just woefully inadequate, but in some respects, dangerous, as the basis for the impeachment of an American president,” Turley said in his opening statement.

“I am concerned about lowering impeachment standards to fit a paucity of evidence and an abundance of anger,” Turley continued. “If the House proceeds solely on the Ukrainian allegations, this impeachment would stand out among modern impeachments as the shortest proceeding, with the thinnest evidentiary record, and the narrowest grounds ever used to impeach a president.” 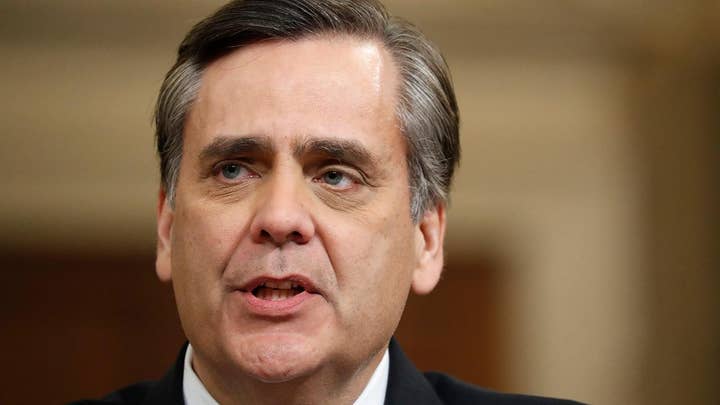 He added: “If we are to impeach a president for only the third time in our history, we will need to rise above this age of rage and genuinely engage in a civil and substantive discussion.”

"Impeachment needs to be based on proof, not assumptions," Turley said.

Republicans on the committee echoed Turley's statements, with House Judiciary Committee Ranking Member Doug Collins, R-Ga., slamming Democrats for wanting to hold the "fastest" impeachment proceeding, while Rep. Jim Jordan, R-Ohio, said the outcome has been "predetermined." Jordan blasted the process as "unfair," and biased against the president.

"The reason it's been unfair is because the facts aren't on their side," Jordan said. "The facts are on the president's side."

Jordan added that it is "scary" that the Democrats "have never accepted the will of the American people."

"This is not healthy," Jordan said. "The facts are on the president's side. Not some constitutional hearing at the end of the process when you guys have already decided where you're going to go."

Early in the hearing, Republicans made several unsuccessful parliamentary inquiries and motions, including an effort to call House Intelligence Committee Chairman Adam Schiff, D-Calif., to testify on his committee’s report containing the findings from their impeachment inquiry into the president, which ended last month. 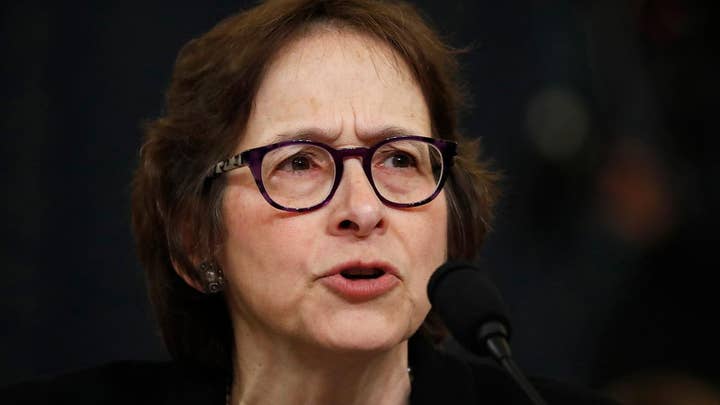 Republicans also motioned to subpoena the whistleblower, whose complaint prompted the impeachment inquiry altogether. Both motions were tabled, meaning that neither Schiff nor the whistleblower would be required to testify or appear before the panel.

At the center of the impeachment inquiry is Trump’s July 25 phone call with Zelensky, in which he pushed Kiev to announce investigations into the Bidens and 2016 election interference. The whistleblower’s complaint was submitted to the intelligence community inspector general and claimed that the president was soliciting a foreign power to help in his 2020 re-election by investigating a political rival.

In late July, prior to the Ukraine controversy bubbling to the surface, Nadler and Democrats on the Judiciary Committee announced, what they called, an “impeachment investigation,” focused squarely on Mueller’s investigatory findings. Nadler announced that they would continue to investigate allegations that the president obstructed justice in that probe—an inquiry that Mueller left unresolved.

But Wednesday, Democrats sought to bring the topic of the Mueller investigation back to the forefront, noting in his opening statement that Trump “welcomed foreign interference in the 2016 election” and “demanded it for the 2020 election.”

“In both cases he got caught and in both cases he did everything in his power to prevent the American people from learning about his conduct,” Nadler said.

Meanwhile, this week, Schiff transmitted a report with the majority’s findings from their inquiry, which concluded last week. The report concluded that Trump withheld nearly $391 million in military aid from Ukraine, conditioning its delivery as well as a White House visit for Zelensky on a public announcement that he was conducting investigations desired by Trump. The Democrats’ report also accuses Trump of committing obstruction by instructing witnesses not to comply with congressional subpoenas.

Republicans on the Intelligence Committee drafted a report of their own, which rejected Democrats’ claims, stating there is no evidence for impeachment.