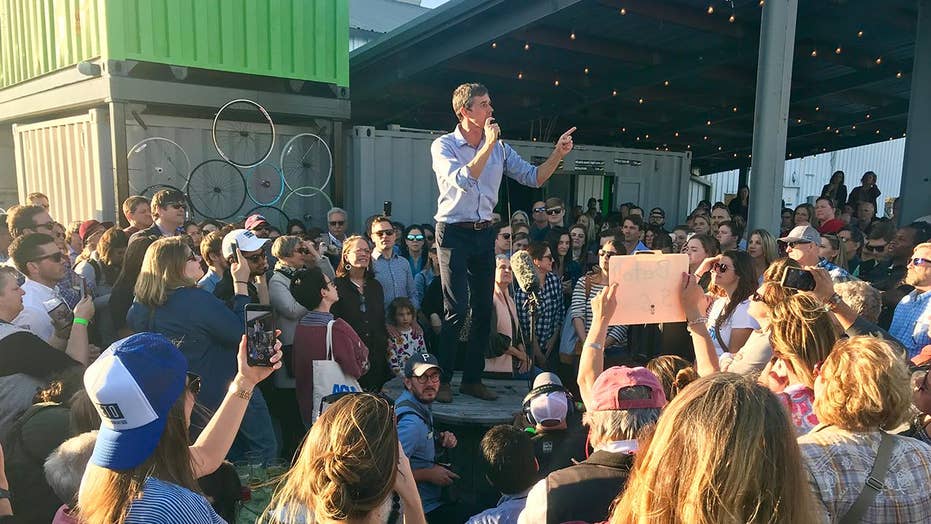 Voters shift support from other Dems to the 'Beto bandwagon'

CHARLESTON, S.C. -- Kicking off his campaign with a swing through early battleground states, newly announced Democratic presidential hopeful Beto O’Rourke met with voters at the University of New Hampshire in Durham on March 20.

Speaking to an overflow crowd of over 500 people, most of whom were students, he discussed tackling climate change, raising pay for teachers, the debate over gun control and reducing student debt, sharing his personal experience with the growing burden.

“I have no hope of earning your vote if I have not first listened to you,” he said.

University of New Hampshire student Madeline Putman said it was exactly what she wanted to hear from a visiting presidential candidate.

“I was interested in [Vermont Sen.] Bernie Sanders and [New York Sen.] Kirsten Gillibrand because I am from upstate New York and that's where she's from, but after hearing their policies versus Beto’s today, I think he has my vote,” she told Fox News.

UNH student Wyleigh Chase said O’Rourke’s age, 46, is a factor for her.

“He's young and refreshing…he's somebody that I think I can relate to just as much as my parents can relate to and I think that's really unique and something that you don't find in a lot of political candidates,” she said. “So far, my support is leaning for Beto.”

When asked whether they would attend future New Hampshire events hosted by other Democratic candidates, both Putman and Chase said it would take a lot of convincing to change their minds.

It’s an effect being repeated at campaign stops across the country —the former El Paso congressman plucking supporters of his Democratic rivals to join his movement.

Driving his own rented minivan to and from events and speaking in both English and Spanish to crowds of hundreds, he has made a lasting impression on voters who had heard little of him before his visit to their state.

On March 14, after months of speculation, he announced via video that he was jumping into the crowded race to take on incumbent President Donald Trump.

Less than two years ago, O’Rourke was relatively unknown, developing a faithful following during his high-profile Senate run against incumbent Republican Texas Sen. Ted Cruz. After his closer-than-expected loss in November 2018, coming within just two points to victory, rumors began to circulate about a possible presidential run—the loss proving to be a catalyst to his run for a position far greater.

O’Rourke showed that he could be competitive in deep-red Texas, peeling away his label as an underdog to become a rising star within the Democratic party.

Since his announcement, the venues for his campaign stops have ranged from dive bars to university auditoriums, each standing-room only by the time he begins speaking. Most of the time, he's perched on a stool, chair or bar top so all attendees have a view of him.

Crowds chant “B-E-T-O” as they wait for him to arrive and swarm around him asking for autographs, selfies and handshakes as soon as he wraps up.

“He is a very charismatic engaging young man,” said Iona College political science professor Jeanne Zaino. “People really do…feel that he has this ability to transcend almost into an Obama-esque quality…these people feel like he has what it takes to beat the sitting president and to bring the country together should he be elected.”

His outsider status, millennial appeal and reputation as a moderate with crossover appeal for Republicans critical of President Trump have gained him a new base of supporters, many of whom have jumped ship to join the “Beto bandwagon.”

“My loyalty has mainly lied with Bernie Sanders,” said University of South Carolina student Dev Patel. “But frankly, I have to admit a few of the views he holds are too radical to really work with the political ecosystem we have…so as of now, I’m definitely loyal to Beto.”

But he isn't only appealing to former Sanders supporters.

“I was very much a fan of [California Sen.] Kamala Harris,” said South Carolina voter Dwayne Green.  “It was between her and Beto and right now, I’m team Beto.”

New Hampshire voter Courtney Tobe said she identified as a Republican until the 2016 election and is attracted to O’Rourke’s message of unity.

“He doesn't seem to be doing much mudslinging or…talking trash about the other candidates,” she said. “He's really just trying to focus on how he can bring the country together and that's what we need. We need someone who we can look up to and respect.”

But some voters are patiently holding out for other candidates to gain their support.

“Does he have what it takes? Does he have my best interests at heart?” asked South Carolina voter Jennifer Duggan. “That still remains to be seen…there's a lot to still uncover about all the candidates…I'm just being open-minded to who’s all out there…”

Free of a day job, O’Rourke is determined to get ahead of the rest of his competitors, with 10 months left until voting begins.

He is up against more than a dozen Democratic rivals, including fellow Texan, Julián Castro, the former Obama administration Secretary of Housing and Urban Development and San Antonio Mayor.

With his announcement, the spotlight intensifies on former Vice President Joe Biden, who is technically still undeclared, but has hinted at entering the race. An official April announcement is expected.

According to the latest Fox News Poll, Biden is the top choice at 31 percent, followed by Sanders at 23 percent. O’Rourke, three decades their junior, makes up a second tier with Harris. They are followed by New Jersey Sen. Cory Booker and Massachusetts Sen. Elizabeth Warren, each with four percent. The other candidates received less than 2 percent of the vote.

But his popularity seems to be rising. A Quinnipiac University national poll released this week ranked O’Rourke third at 12 percent among Democrats and Democratic-leaning independents.

O'Rourke's willingness to take questions from both attendees and the media at each of his events has shown the country what he stands for, as well as what he lacks as a candidate.

His speeches touch on a variety of hot-button topics like climate change, gun control, criminal justice and healthcare reform, student debt and police brutality against African-American men, among others.

But critics argue his work-in-progress platform doesn’t have specific policy proposals compared to his competitors who were able to detail step-by-step strategies for change at this point in their campaigns, something that is most apparent in post-speech Q&A sessions with attendees and conversations with media where O’Rourke sidestepped questions on his views on late-term abortion and whether his campaign will accept money from the fossil fuel industry.

“Beto is going to have to answer the lack of experience question…he's going to have to lay out his policy positions in a more concerted way,” said Zaino. “He has so far been fairly vague…about many issues that Democrats care about.”

But Antjuan Seawright, CEO and founder of Blueprint Strategy, a political consulting company, says O’Rourke could use that to his advantage.

“...The more miles you have on your political engine, the harder it is for your car to travel down the road…so I think that's actually a strength…that he does not have the experience some of the others in the race have,” he said.

O’Rourke will officially kick off his campaign on Saturday with visits to three Texas cities, starting in his hometown of El Paso. Campaign volunteers have organized more than 1,000 watch parties across the country for the announcement.